Is anyone analysing the outcome of the marginals in the 2016 Scottish election?

It is imperative the SNP learn from the strategic error of relying on a blanket, “one message fits all approach” when the electorate of a number of marginal constituencies were clearly in need of a local approach, (which was duly delivered by opportunist Unionist politicians.)

Many opinion polls published prior to the election gave indication of an SNP whitewash of all other Parties, but the under noted candidates confounded predictions by winning their seats in Holyrood.

My take on events of 5 May 2016 is detailed below. Please feel free to add comment so that I might improve the analysis before forwarding it to SNP management for consideration.

Scottish Conservative leader Ruth Davidson won the Edinburgh Central seat from the SNP. Davidson, who had previously been elected to Holyrood through the list, beat SNP candidate Alison Dickie by 610 votes. She received 10,399 votes, an increase of 15% from 2011 when the Conservatives came fourth.

* The electorate in Edinburgh Central is notorious for its illogical voting patterns. Since 1999 it has returned Labour, SNP and most recently Tory MSP’s.
* Davidson ran a very personal campaign, capitalising on her high-profile media presence, suppressing the Tory brand in her campaign leaflets.
* Davidson’s primary strategy was to attack Labour. Their campaign headline “Ruth Davidson for a strong opposition” portraying Kezia Dugdale as a weak and ineffectual leader worked a treat. Many labour voters switched their allegiance to the Tory party.
* The SNP majority was defending a wafer thin 237 majority and was a ripe target for any strategic voting and there was a lot of it in the constituency. 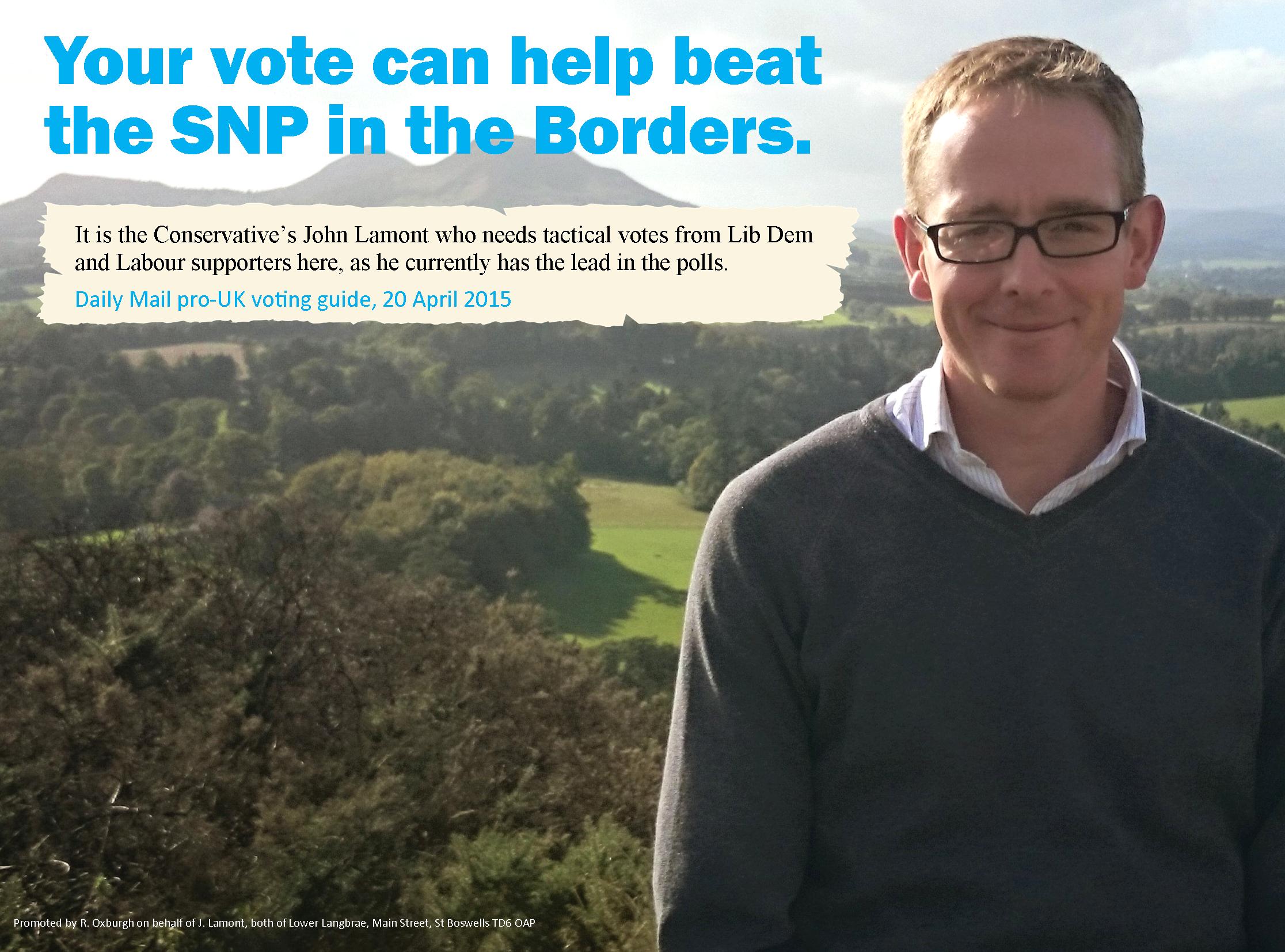 * His campaign was all about himself. Scant mention of the Tory party

*The SNP lost the seat to Alexander Burnett (Tory) who was elected after the Tory party’s share of the vote surged 17%. But why the surge?

The son of Scottish Secretary David Mundell, won the Dumfriesshire seat, with 13,536 votes.

Twenty-six-year-old Mr Mundell spoke of helping to deliver leaflets for his father at the age of just eight.

He claimed (lied) he had joined the the Scottish Conservatives in 2012 after being inspired by the leadership of Ruth Davidson.

Mundell said that during his hard-fought campaign, the message he was getting from local people was that Dumfries and Galloway is the “forgotten part of Scotland.

That’s what I want to change. “All I want to do is make sure the people in this region get the representation I think they’ve been lacking over the last few years.” 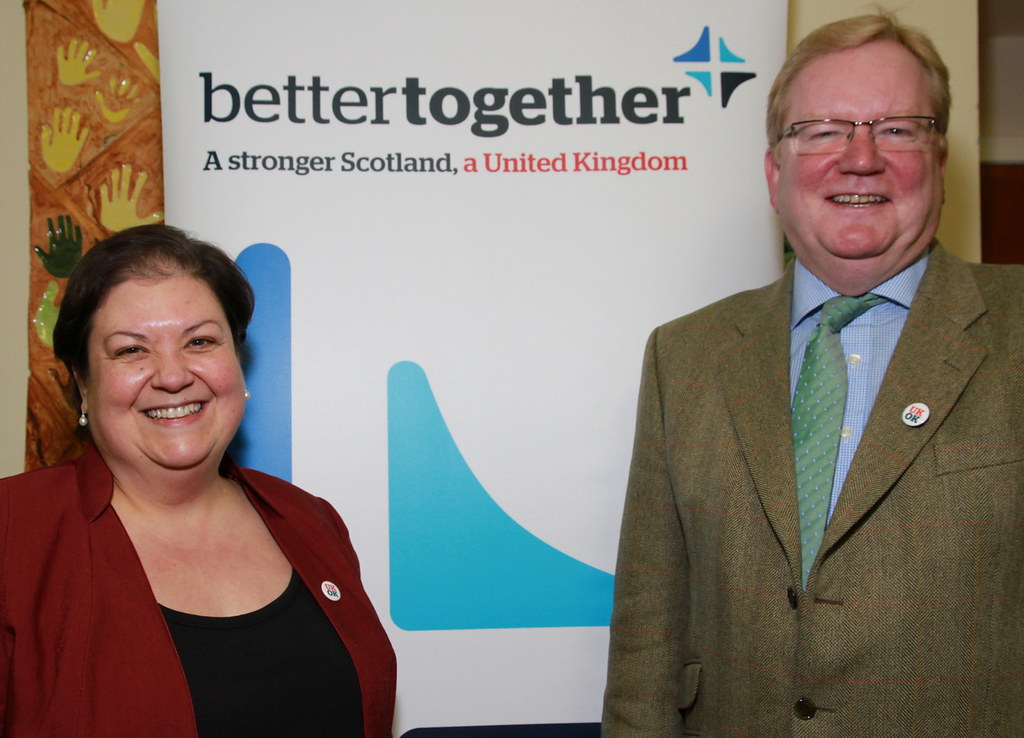 Deputy Party Leader Carlaw, joined the party in 1978. A car salesman he tried and failed on three occasions to win the Eastwood constituency seat, in 2003, 2007 and 2011, before finally succeeding in 2016.

A list MSP from 2007 representing the West of Scotland for the past nine years, he stood for the party’s leadership when Annabel Goldie resigned in 2011, losing out to Ruth Davidson.

He was appointed as Davidson’s deputy and went on earn a reputation as one of the Tories’ strongest performers at the Scottish Parliament.

As expected, Ken Macintosh (Labour) lost the seat. But to the Tory canadidate not SNP 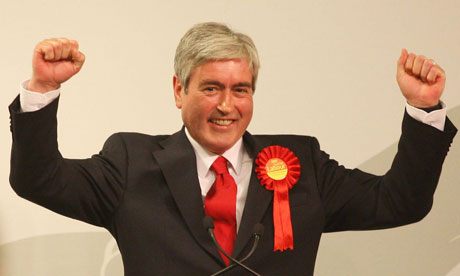 This was a seat that should have been won by the SNP.

How in hell did she manage to hold onto the constituency with 109 votes?

* She played the “local” card with distinction. A local I spoke to said “she is a pain in the neck and useless as an MSP but she does a deal of good work for the community.

* She milked the threatened closure of the local hospital at every opportunity.

* She turned her back of Labour when given the choice of supporting the “No Trident” Party policy or siding with a small part of the electorate dependent on “Trident” for their living.

The politician, who had secured his 2011 seat through the list vote, beat SNP candidate rival Roderick Campbell by 3,465 votes.

He said: “It feels fantastic to have won North East Fife back for the Liberal Democrats. A big majority of 3,000 against a Nationalist tide.”

He added: “It’s a tremendous result for the Liberal Democrats in North East Fife.”

In his victory speech, he said it had been a “positive, uplifting campaign” and added: “I’ve had the time of my life in this campaign.”

How did he do it?

* He wrapped himself in the glory of the retiring Ming Campbell who held the constituency for many a year.

* The constituency is very largely rural with a significant farming community. Sustained attacks by the Tory and Lib/Dem on the SNP government over the distribution of the Common Market subsidies had an effect.

* Rennie enjoyed blanket positive coverage throughout the campaign by a compliant Unionist media. Being photo-bombed by a pair of amorous pigs enhanced his image as a fun seeking but serious politician.

* He was happy to accept the role of underdog. Acting the goat whenever the situation presented itself. Clearly copying the tactics of Boris Johnson. See his facebook page: https://www.facebook.com/WillieRennieLibDem/

* St Andrews University and it’s feeder schools is a known hotbed of Unionist support. Many students are English.

* The constituency has a large, (older ) voter base and is relatively prosperous in comparison with the South of Fife.

* Rennie is a local boy, born and schooled (Cupar) in the area. 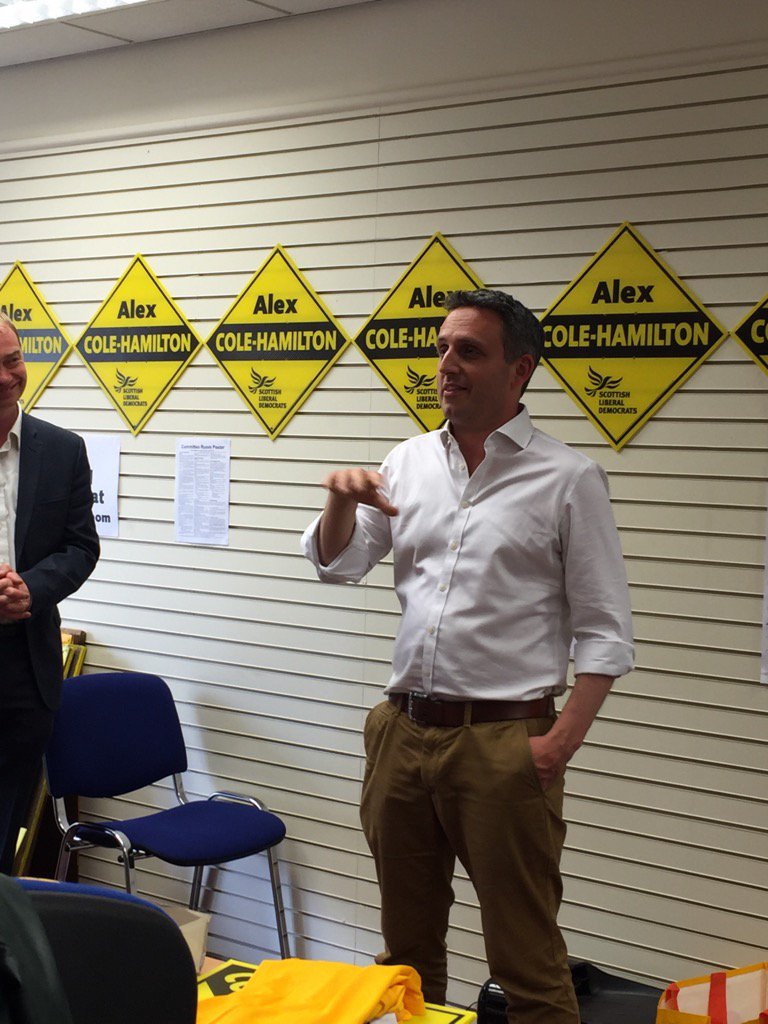 * Known for his Charity work Alex Cole-Hamilton has stood for the Lib Dems in this seat a number of times.

* His team anticipated ongoing investigation and negative publicity around sitting MP Michelle Thomson (who had resigned the SNP party whip) would assist his campaign.

* He said an “old-fashioned campaign” won Edinburgh Western for the Lib Dem.

* He went on to say that the Lib Dem had ran a massive campaign over the last year, knocking on upwards of 25,000 doors since the 2015 general election.

* He freely admitted it was an old-fashioned way of campaigning – but it had worked a treat and they noticed a shift away from the SNP over the winter.

* In his closing statement he said “We will build fortresses in these constituencies and we will defend them to the hilt.”

* The constituency had previously, (for many years) been a Lib/Dem stronghold in both Holyrood and Westminster.

* Even the 2015 SNP landslide only achieved a 6% swing from the sitting Lib Dem MP.

Willie Rennie always boasted the party would be safe in the Northern Isles. Even when factoring in the unwelcome adverse publicity of Orkney and Shetland MP Alistair Carmichael who badly damaged the party’s image when he denied but admitted in court that he had conduct an unfounded smear campaign against Nicola Sturgeon.

The first result of the night was declared in Kirkwall, where Liam McArthur of the Liberal Democrats held his Orkney seat

Enjoying a substantial personal following from a relatively small electorate McArthur was re-elected with 67% of the vote, a 31.6% surge.

The Liberal Democrats have held the constituency since the Scottish Parliament was formed in 1999.

* His campaign centred on his absolute commitment to always put Shetland’s needs, (schools, health, transport and local jobs) ahead of Party doctrine.

8 replies on “2016 Scottish Election – Did SNP Blunders Allow this lot Win Their Seats?”

Tactical voting seems to be the order of the day for the Yoons , you could put a Turnip up in NE Fife and so long as he was ANTI-SNP , they would vote for him /it .

Bit like everyone always voting Lab in West Fife for 50 years , and those self same voters , now vote SNP .

No blunders whatsoever – I’m surprised you even consider that.

After nine years of government, and up against a hostile media and a voting system designed to prevent a majority, the SNP did remarkably well. Tactical yoon voting had a big impact. After the yoons were caught offguard in 2015, it was inevitable that many would consider holding their nose and voting against the SNP. The empire struck back, but the damage was contained and there is still an indy majority at Holyrood. It could have been a lot worse, given the swing to the tories (all credit to Ruthie who played a blinder).

If any criticism of the SNP is to be made, perhaps it was because they failed to manage expectations before the election. They should have emphasised more forcefully that a second majority government was highly unlikely. Not an easy task, however: The other indy parties assured us that another SNP majority was on its way and the media pushed hard on the “One party state” nonsense, and many SNP politicians were slow to appreciate the risk and respond accordingly.

IMO the election result (initially disappointing) was, on reflection perfect in so many ways. Nicolas Sturgeon is now FM with her own mandate, Labour’s terminal decline continues at a pace, an indy majority remains, and the tories no longer have their human shield of willing Labour politicians to hide behind. What’s not to like?

What has been pointed out elsewhere is lower working class turnout to vote, which will affect Council elections too

I hadn’t picked that one up

Interesting. This realignment into Scottish vs British parties as the major fault-line now in Scottish politics is a very welcome one. It was very disappointing to lose good MPs in 2016, but winning 56/59 seats was always bizarre (not to mention unfair on only 50%+ of the vote). The good thing about this realignment is that the old distraction provided by Labour has gone. The were good at claiming to represent ordinary people and in a way Scottish interests, although they did nothing of the kind and only ever managed the working class on behalf of the rich. Now that that has gone, the arguments are clearer. Independence is no longer a question of “if” and “why” but of “how” and “when”.

Polarisation of Scottish politics might well be a major blunder by the Unionists.