Scottish Tories: A party of Thieves afflicted with Foot and M0uth

In 2010 the Scottish Conservative and Unionist party abandoned the Internet to concentrate on more traditional forms of persuasion, such as planting false stories with the BBC and in the Scottish press.

News of the Tory online U-turn first became public, when the Tory Hoose site was suspended, leading to speculation that the party had simply forgotten to pay their ISP. The website had been designed to allow Scottish Tories to discuss their more loony policy ideas away from the main stream.

It also provided a platform for some of the more swivel-eyed racist groups within the party to express their hatred, and for hard-line right wingers to discuss just how much more the poor should be made to suffer in the name of low personal taxation.

It soon became obvious that the suspension was not due to an administrative oversight when the Tory Hoose twitter and Facebook pages were also suspended.

Many of their political opponents lamented the passing of Tory Hoose, including SNP MSP Humza Yosuf, who told BBC Scotlandshire: “I used to enjoy the odd visit to Tory Hoose. OK, it could sometimes get a bit racist, but it still contained some of the most amusing articles on the internet. Occasionally it was even funnier than BBC Scotlandshire, and that’s saying something. Personally, I’ll miss it.”

Scottish Tory MSP David McLetchie said: “I thought Tory Hoose was a brilliant idea. However, I could never understand why so few of the dozens of visitors each month seemed to be from non-Tory parties.

Eventually we hit on the idea of re-tweeting members of the Orange Order, BNP, UKIP and so on, and we saw the hits going up dramatically, but it was just too little too late, and only a few of the ones from the Order had a vote in Scotland anyway, the others all live south of the border.

So, we decided to return to traditional values and planted a wee spoof story in the Scotsman suggesting that the HMRC’s reticence to collect taxes from large companies was all Alex Salmond’s fault, because he once said something nice about new jobs in Amazon.

We even got his picture at the top of the story. That’s the type of thing we Tories know and like.”

The late David McLetchie Leader of the Scottish Tory Party

Leader of the now defunct Scottish Lib Dems oor Wullie Rennie was asked if he too would miss Tory Hoose. He said: “What I won’t miss are the links the Tory Hoose site was developing with the Orange Order and other racist and sectarian groups. Of course, Labour have been doing the same, which is probably why Labour Hame has died as well. But hey, whit can you do, eh?”

Labour’s Ian Davidson, a prominent Tory spokesned and chairchoob of the Scottish Affairs Committee on Failing Unionists Constantly Kindling Their Hatred of Everything, Wrapped in English Bias, growled:

” Besides it turns oot that the lodges wur a much mair effective way tae spread racist and sectarian shite than the interweb, so they shut the Tory hame site doon.

It was a bit too public for that sort ay stuff in ony case. Besides, maist ay thay nutters cannay read or write, and the wans that can ur aw too auld tae use a computer, so it was eiways a bit pointless huvvin a web site fur thum.

Aw the visitors wur cybernatz bastirts goin oan fur a laugh. We wurked oot that aw thon nutters need is a room wi a few Union Jacks, a picture ay the Queen wi King Billy, an some cheap beer, an they’re aw as happy as Larry.

We offered them a few mair marches in Glesgae tae nick their vote fae the Tories, an they wur fine wi that. We might no ay done very well, but we stoaped the natz fae takin ower the toon.

The trubble wi the blue Tories in Scoatlandshire is that there isnae much support fur heartless greedy wankers in the first place, and we’ve choried aw their claes years ago in ony case. So, there’s no really ony point tae thum ony mair.

The ever articulate Ian Davidson 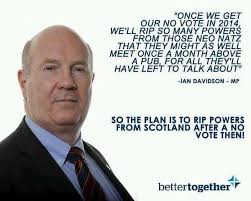 Archbishop Cranmer Leader of the English Anglican Church clarified the origins of the Scottish Tory Party name: “It is of interest that, in a land still riddled with Rangers – Celtic sectarianism and expressions of hate – that they have dropped the religiously – neutral ‘Conservative’ tag and opted for the historically religiously-divisive (and deprecatory) ‘Tory’ label.

“Tory” is derived from the Irish-Gaelic ‘tóraidhe’, meaning ‘thief’ or ‘brigande’. It emerged during the Exclusion Crisis of 1679-81 and was applied to a group of politicians who favoured the accession to the throne of Roman Catholic James, Duke of York. The word was a Protestant term of abuse and implicitly meant ‘Irish & Catholic’.

Although such etymology is now largely forgotten in England, there’ll be more than a few Scots (Protestant and Roman Catholic) with antennae for this. It is interesting (not to say ironic) that the blog now dedicated to exploring the future of Conservatism in Scotland adopted, albeit humorously, an historic term of sectarian hatred and abuse. http://www.archbishop-cranmer.blogspot.com/

* Your Grace writes with authority, intelligence and thoughtful detail, all of which are completely lacking in the opinions of many Scotch towards the Party. I doubt the wee bairns an’ their Labour-voting pram – pooshin Ma in Easterhoose will be too bothered what we’re called.

* Archbishop Cranmer might be additionally consternated by the agricultural meaning of ‘Hoose’. I am minded to inform him that this term applies to disease of a bronchial nature that afflicts woolly creatures of cloven hoof. This may further complicate matters as we would now appear to have Papist Thieving Sheep Pox as our representatives north of Carlisle.

* Whatever the name, the Conservative Party in Scotland will still be run by a bunch of serial losers. The voters are not stupid and will not fall for “rebranding” or any other opportunistic stunt. Any new party must be free of the baggage of Scottish Tory MEPs, failed candidates and Cameroon stooges. ‘Labour’s Ian Davidson, a prominent Tory spokesned and chairchoob of the Scottish Affairs Committee on Failing Unionists Constantly Kindling Their Hatred of Everything, Wrapped in English Bias’

Genuine outburst of hooting at thatline. Loved it.

In full flow he was the master of mirth