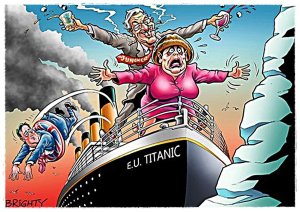 Fit the hell wid you dae wi yirsell if yi got yir precious independence? Yid hae fk all ti greet aboot n moan aboot…”please…hae pity on us poor wee oppressed and aggrieved greetin pussed sniffly nosed shites” Your patheticness is such that if I were English I would take great pleasure in kicking fk out of you.

We who wish to live in a state independent from the criminal politicians of Westminster are not seeking attack or pity from the likes of yourself since it is evident from the content of your contribution that you are devoid of any humanity. Sad.

He is, most certainly, a thuggish troll.

His comments expose his politics are entrenched in the enrichment his lifestyle demands. All for himself nothing for anyone else!!!

That seems to sum this individual up precisely. Thank you.

Eh…the Massacre of Glencoe was carried out by Scots not Englishmen. The MacGregor clan were seen as rebels because their chief, Maclain, didn’t sign the allegiance to the king in time due to snowstorms – the Massacre started because of this fatal accident.

Glencoe – the Campbells and the massacre

The story of the lead up to the massacre at Glen Coe is a complicated one, mired in the politics and petty rivalries of the time and place.

In August 1691, the Government offered a pardon to all Highland chiefs who had taken up arms against the new monarchs, provided they swore an oath of loyalty in front of a sheriff or deputy before 1st January 1692. Most, but not all of the chiefs submitted.

Alasdair MacIan, chief of the Clan Donald of Glencoe, delayed submitting until the very last minute. But eventually presented himsel to the Governor, Colonel Hill, at Fort William, on 31st December. Hill explained that he could not accept MacIan’s submission, because it had to be administered by a civil magistrate. He gave the chief a letter for the sheriff-depute, Campbell of Ardkinglas, at Inveraray, more than 70 miles to the south, saying that he hoped the submission of Glencoe could be accepted in good faith.

MacIan arrived at Inveraray on 2nd January, but the Sherrif Depute was away on holiday and did not return until 5 January. Campbell accepted the oath but warned MacIan that the matter would be referred to the Privy Council, in Edinburgh. He also wrote to the Governer at Fort William asking that he take the Macdonalds under his care.

MacIan’s case was never submitted to the Privy Council because it had been decided that the submission had been made after the prescribed date. Other chiefs had also missed the deadline but only the MacDonalds of Glencoe were singled out for special treatment; why has never been explained………..but the villain of the piece seems to have been Sir John Dalrymple, Secretary of State for Scotland, a Protestant Lowlander who had already sent word to the Commander in Chief in Scotland, Sir Thomas Livingstone, that troops would shortly be required to ravage the lands of recalcitrant chiefs.

The final instructions he drew up for the King to sign concluded:

Confirmation of the “Oath”. “If M’Kean of Glencoe and that tribe can be well separated from the rest it will be a popular vindication of the public justice to extirpate that sept of thieves.”

“I desire you will begin with Glencoe and spare nothing which belongs to him, but do not trouble the Government with prisoners.”

In his letter to Hill, Dalrymple said, “Let it be secret and sudden”. He did not want any survivors.

On 1 February 1692, two companies of red-coated government soldiers (about 120 men, of whom only around a dozen were Campbells) were sent to Glen Coe. Commanded by 60 year old, Captain Robert Campbell of Glenlyon who through drink, bad decisions and loss of his property, had been forced to take up a commission in the army.

The MacDonalds thought they were safe and, accepting the explanation that the soldiers needed to be billeted with them whilst collecting taxes, welcomed them into their homes with traditional Highland hospitality. At that time, the MacDonalds of Glencoe numbered perhaps 150 people, living in a number of clachans, small settlements, up and down the glen.

For almost a fortnight, troops and clansmen lived together, sharing food and MacDonald generosity. Glenlyon was even related to the wife of the chief’s younger son, Alexander and visited him regularly, indeed on the night of 12th February, he played cards with Alexander and the chief’s oldest son, John.

On that same day, Glenlyon had received orders from his commanding officer, Major Duncanson, who had written the following order:

“You are hereby ordered to fall upon the rebells, the McDonalds of Glenco, and put all to the sword under seventy. You are to have a speciall care that the old Fox and his sones doe upon no account escape your hands, you are to secure all the avenues that no man escape. This you are to putt in execution att fyve of the clock precisely; and by that time, or very shortly after it, I’ll strive to be att you with a stronger party: if I doe not come to you att fyve, you are not to tarry for me, but to fall on. This is by the King’s speciall command, for the good & safety of the Country, that these miscreants be cutt off root and branch. See that this be putt in execution without feud or favour, else you may expect to be dealt with as one not true to King nor Government, nor a man fitt to carry Commissione in the King’s service. Expecting you will not faill in the full-filling hereof, as you love your selfe, I subscribe these with my hand att Balicholis Feb: 12, 1692.”

Accounts of what happened that night vary in detail, but it seems that, at the appointed time, a party of troops arrived at the chief’s house and shot him as he was getting out of bed. His wife was stripped naked and abused and butchered. Her assailants removed the rings from her fingers with their teeth.

Glenlyon’s English troops tied up their hosts and shot them, one by one. Men, women and children were mercilessly butchered. Their houses, stone and turf affairs with thatched roofs, were set ablaze, animals driven away and the bodies of the dead thrown onto a dunghill.

Those that escaped, including the old chief’s older sons, fled to the hillside into a snowstorm. In all, the soldiers murdered 38 people and about 40 more died of exposure in the mountains.

Summary: The order to wipe out the Macdonalds was unsuccessful. 112 escaped the scene of the betrayal, although 40 of them died from exposure. It later emerged that the Campbell members of Glenlyon’s command had assisted the escape of a number of Macdonalds.

Your comment about the Roman Catholics is indicative of Unionist thinking. To say that blatant and permanent discrimination against Roman preventing them from holding the Crown is a trivial issue, and not something to get my nickers in a twist over, is deeply offensive but understandable coming from a Unionist supporter.

A magnificent copy and paste job on the history of Glencoe! http://bitaboutbritain.com/the-massacre-at-glen-coe/

Best to be as accurate as possible. !20 soldiers deployed of which only 12 were Campbells. And evidence presented later indicated that the Campbells assisted the escape of many of the Macdonalds from the brutal English soldiers. Impossible to support your assertion that blame for the massacre should be attributed to the Campbells.