The first casualty of Britain’s deployment in Helmand was Captain James Phillipson, who died in June 2006 when rescuing ambushed colleagues.

The ministry of defence admitted he lacked “mission essential equipment”, like night-vision goggles.

Today a coroner damningly concluded that Captain James Phillipson was not killed by enemy bullets, but by the poor equipment he was given.

Spelling out what that meant. He said “They were defeated not by the terrorists but by the lack of basic equipment. To send soldiers into a combat zone without basic equipment is unforgivable, inexcusable and a breach of trust between the soldiers and those who govern them.”

Captain Philippson’s father said “The ministry of defence was starved of cash by the then chancellor, now our miserable parsimonious prime minister. It’s a question of money, and they’ve not spent the money and they’ve risked soldiers’ lives and in this case lost a life.”

He added that they’d been hampered in their fight back, as their heavy machine guns weren’t mounted on their Land Rover, vehicles meant for Belfast and eventually replaced amid the roadside bombs of Iraq or Afghanistan.

Today, another inquest in Wiltshire heard two soldiers in Iraq had asked for more armoured vehicles, but were denied them and later killed by a roadside bomb.

Britain does war on the cheap, one officer said. For example, British troops in Basra, Iraq under regular rocket attack from insurgents, slept in breeze block beds. But the Dutch in Afghanistan slept in mortar-proof portacabins that cost £20,000 each.

In southern Afghanistan, Nato countries differ greatly in how much they spend on operations per soldier. 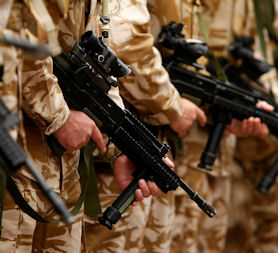 Gordon Brown said that Britain’s strategy in Afghanistan is working, despite troops suffering one of their bloodiest days since the conflict began.

It was confirmed yesterday that eight soldiers had died and many more were wounded.

The Ministry of Defence named who of the soldiers who died as Rifleman Daniel Hume, 22, from 4th Battalion The Rifles and Private John Brackpool, 27, who was shot while on sentry duty at a compound just outside Laskkar Gar.

In a letter to the senior MPs on the Commons Liaison Committee, Gordon Brown said the “Operation Panther’s Claw” offensive to clear the Taliban from central Helmand was succeeding despite tragic losses.

Morale remained high and the assessment of commanders on the ground is that the current operations are succeeding in their objectives.

They are having a marked impact on the Taliban in central Helmand and will improve security for the population in the run up to the elections, and will allow longer term work on governance and development to begin.”

The deaths took the toll to fifteen so far this month and the overall total during operations in Afghanistan since 2001 to 184, surpassing the 179 who’ve died in Iraq.

On Thursday two soldiers, Rifleman Daniel Hume from 4th Battalion, The Rifles and the other from Princess of Wales’s Royal Regiment attached to 1st Battalion Welsh Guards, were killed in separate incidents.

Defence Secretary, Bob Ainsworth said people must not forget the sacrifice those killed had made. But, he warned, there would be more deaths to come.

“It is grim news and we’ve got to feel for all of the friends, all of the families of the people who have fallen.

We must never forget the sacrifice they have made. But we equally have got to remember that we are in Afghanistan for a reason. This country is directly threatened by the insurgency that goes on in Afghanistan and we’ve got to be mindful that our troops have made a lot of progress over this period of time.

It is hard fighting, dangerous, difficult terrain and sadly we’ve suffered a number of losses that were taking on the Taliban in a key heartland area. 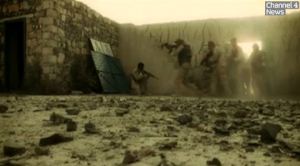 A report by the Commons’ defence select committee said that overseas helicopter capability is being “seriously undermined” by a shortage of medium and heavy lift battlefield crafts and urged the Ministry of Defence to increase the number of helicopters and train more crew as battlefield operations were being inhibited due to lack of air support.

The group of influential MPs said they were “convinced that the lack of helicopters is having adverse consequences for operations today and, in the longer term, will severely impede the ability of the UK armed forces to deploy. Furthermore, we are troubled by the forecast reduction in numbers of helicopters, which will make this worse.”

The criticisms came in a specially-produced report, amid a furious row over military equipment sparked by the deaths of 15 UK service personnel in Afghanistan in just 10 days.

Prime Minister Gordon Brown insisted “it is absolutely clear” that the heavy death toll recently has not been due to a shortage of helicopters.

But, chairman of the defence committee, the Rt Hon James Arbuthnot, said

The report also criticised plans to extend the lives of existing Sea King and Puma aircrafts to bridge the gap in capability. It said

“repairing ageing helicopters at considerable cost is not the best option operationally or in terms of public money and it is no substitute for increasing numbers of the fleet. The committee does not believe that the planned life extension programmes will provide adequate capability or value for the taxpayer. Only a procurement of new helicopters can meet the original objective of reducing the number of types of helicopter in service within the UK Armed Forces.”

“The time has come to appreciate fully the role of helicopters in modern operations. The MoD should seize the opportunity to recognise the importance of helicopters to current and contingent operations, and work towards strengthening all aspects of capability: the number of helicopters in the fleet, the support structure that underpins their operations, manning, both in the air and on the ground, and finally, the training for the full spectrum of capabilities described by the review itself.” (Channel 4 News)

The compensation system for injured British soldiers should be overhauled, a leading support group said today.

The demand comes as the Ministry of Defence (MoD) goes to court to cut the compensation offered to a pair of soldiers injured in Afghanistan.

Light Dragoon Anthony Duncan, who walks with crutches after being shot while on patrol in Iraq in 2005, was originally awarded £9,250. The sum was increased to £46,000 by an appeal tribunal.

Royal Marine Matthew McWilliams, who fractured his thigh in a military exercise, was awarded £8,250, which was increased to £28,750 on appeal.

The high court upheld the higher awards, ruling that the MoD argument that there should be a distinction between the original injury and later complications was “absurd”.

The MoD is taking the case to the court of appeal, where its lawyers are expected to claim the two soldiers should be compensated only for the initial injuries and not subsequent health problems.

“On the principle of compensation clearly there needs to be some sorting out as to whether it relates to the injuries sustained at the time, or the consequence of those injuries in later life. That needs to be addressed,” said Jerome Church, general secretary of the British limbless ex-service men’s association (Blesma). Mr Church himself lost a leg in service in Northern Ireland.

Mr Church’s organisation has dealt with more than 50 British soldiers who have lost limbs in conflict in Afghanistan. The grim total, combined with the current death toll of 191, is drawn from the type of combat soldiers are engaged in. He added

“Roadside bombs and gunshot wounds are the key reasons why British soldiers are returning to the UK with horrific injuries. We are dealing with a lot more multiple amputations than we were 20 years ago, and that’s because of the types of explosive devices that the soldiers are facing. It used to be more common for leg amputations to just be below the knee on one side – such as I had – but now it can be much more serious. Multiple loss.”

The Ministry of Defence (MoD) confirmed, in response to a parliamentary question that 51 British personnel had undergone amputations after suffering injuries in Afghanistan.

Church said: “Of course, we see a spike in the number of injuries when the operations intensify. These types of injuries do increase in volume when there is an increase in activity, and we hear there are three or four more we will be meeting some in Selly Oak”. (Channel 4 news)