Dugdale’s first major policy announcement came late in the month of September 2015 – Probably because she was head girl at her secondary school she chose Education as the stage for her first battle with the SNP government. Whoever is giving her advice needs their head examined. The Labour Party track record on education is deplorable. And poor Kezia will pay the price for the blunder.

Scottish Labour have called for every child to be given the best possible start in life in their first advert of the 2016 Holyrood election campaign.

Kezia Dugdale’s party launched the advert on YouTube today ahead of its television premiere on BBC and STV tonight.

john collatin: Perhaps she can start by ladling into the Labour controlled Councils and their management of Education?

How is Jackie Baillie’s West Dunbartonshire team doing? Cutting classroom hours and a cold snack for pupils at lunchtime on a Friday.

PFI rents for schools sanctioned by Brown and Blair. A 25 year bill we did not want. And we still won’t own the schools.

I doubt that there will be a candidate of any hue who would not stand on an “every child to be given the best possible start in life” pledge.

Airhead pamphleteering from the self styled leader of the autonomous Scottish Labour Party. I take it that she will roundly condemn tuition fees, and support free school meals for all pupils. Unless Westminster tells her otherwise of course.

Where did the money come from for the video? Scottish Labour funds, or London Labour?

While stating the the Daily [broken] Record: “I’ve made education my No1 priority, The fact that under this SNP Government more than 6,000 children leave primary school unable to read properly is shameful”.

John Collatin: I think that you’ll find that the vast majority of pupils who leave primary unprepared for a secondary education live in Labour controlled Councils.

The poverty that is the main factor in kids from poorer backgrounds under achieving lies at the door of Willie Rennie, and Ruth Davidson, and the financial mismanagement at Council level, predominantly controlled by New Labour Card Carriers in the built up industrial wastelands.

But Kezia won’t be attacking them, and the Blue Tories continued assault on our poorest and ‘hard working families’, will she?

The unholy alliance that is Better Together trumps any Corbyn Marxist attack on the Tories and Lib Dems Up Here.

SNP BAD is the only game in town, and Corbyn will be told this when he visits, and 700 or so Red Tory activists are herded into an auditorium and filmed by the assembled media.

The Austerity package voted through by the Red Blue and Yellow Tories in January will proceed unchallenged, and 1.5 million of our citizens already living below the poverty line because of Willie’s and Ruth’s Austerity (what ah effin’ 1984 description of financial vandalism) cuts in the last five years, and Ruth’s even harsher attack on the poor for the next five years p[lunges even more Scottish citizens into poverty.

Yet according to Kezia, all this poverty and declining educational attainment is the SNP’s fault.

Not the Tories, not the LD’s, not Miliband’s powder puff opposition, not the Local Education Authority high priced managers or the local councils.

It’s that Nicola Sturgeon’s fault. Utter guff from a party mouthpiece.but we are still not listening, Ms Dugdale. 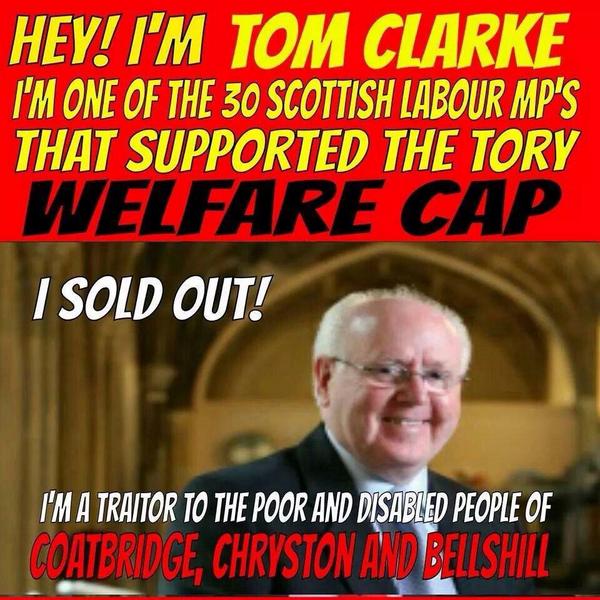 David MacKenzie: I’d rather she put “truth” at the heart of her campaign.

Richard Holmes: Just heard the party political broadcast featuring Dugdale on the telly; to describe it as bland would be kind.

Alastair Gordon: ‘puerile’ would be kind! Question time with 5 & 6 year olds – really . . . And today at FMQs she proved where heart really lies – in the gutter!

Alan Stewart: The ineptitude of this unintelligent and gauche woman is almost painful to watch, even for those who do not wish her party well. What an embarrassment.

But is the record of the Labour Party in Scotland exemplary? A look back to the year 2000 is telling.

The Scottish examination system was left in crisis whilst the Scottish Education Minister, Sam Galbraith, passed the buck on to the agency that has responsibility for administrating the Scottish exam system. This was despite year’s of warning by teachers and opposition politicians that the new exams would cause administrative problems.

Over 140,000 school exam candidates received their results last month to tell them how they had performed in the exams which decide whether or not they will go to university or college. However the Scottish Qualification Authority (SQA), struggling with a new computer system, was thrown into confusion when some students failed to receive their results or received results that were inaccurate. Some pupils even received results for exams they had not sat and a number of native Russian speakers were failed in their Russian language exam.

The Chief Executive of the SQA resigned but the Education Minister passed the buck on to the organisation despite the fact that he was warned about such problems and that thousands of students will have their university applications delayed.

“After sustained pressure from the SNP, the Education Minister, Sam Galbraith eventually announced that an independent inquiry will be carried out to investigate the cause of this delay. However this inquiry is far too late for the thousands of pupils across Scotland who have either received incomplete results or, in many cases, no results at all.

“Labour Ministers are quick to accept credit when things go well, but Galbraith is proving that they are also the first to blame other people for their mistakes when things go badly. As the Education Minister, the responsibility for this unmitigated disaster lies squarely on the shoulders of Sam Galbraith.

In the first First Minister’s Questions since the Summer Recess the Education Minister, Sam Galbraith, was accused of misleading the Scottish Parliament and the public over the exams fiasco. The day before he had said he had “absolutely no powers” to instruct the Scottish Qualifications Authority.

He said: “The terms of clause 9 of the Education (Scotland) Act 1996 which states: ‘The secretary of state,’ that’s the minister, ‘may after consultation with the Scottish Qualifications Authority give the SQA directions of a general or specific character with regard to the discharge of its functions and it shall be the duty of the SQA to comply with the directions.’

“I have no doubt that any fair-minded person looking at Section 9 would regard the comments he made to Parliament and to the broader Scottish public as misleading. It may be that he simply failed to read his civil servants’ brief; or, as some have reported, that he was unaware of the full extent of the powers available to him under the 1996 Act. It is clear that he failed to act when he had the powers to act. Whatever the reason the remarks he made were misleading and did mislead Parliament and the public.”

Student Numbers Down From Last Year

It has been revealed that the number of Scottish students accepted to universities has fallen by 6.6% according to the University application organisation UCAS. Commenting on this disturbing announcement, Shadow Lifelong Learning Minister Mr John Swinney MSP said:

“It is an absolute disgrace that serious administrative and managerial blunders are costing Scottish students places at universities and colleges. The Scottish Labour government insisted throughout this sorry mess that no Scottish students would be disadvantaged.

“The repercussions of this fiasco are becoming more severe with each passing day. The situation is far more serious than anyone first thought. It was bad enough when we thought students would suffer anxious delays and doubts over the validity of their results, but now that Scottish pupils are facing the prospect of losing out on university places the situation is critical.

“It is deplorable that this shambles is likely to have a damaging effect on the future of thousands of students. This Scottish Labour government have badly failed Scotland’s students. Although Sam Galbraith is responsible for the shambles over the results process, it is Lifelong Learning Minister Henry McLeish who must guarantee those students affected will not be left in the academic slow lane.” http://www.forscotland.com/snpusa/august2000.html

Another excellent blog Calton jock. Shared a link on Facebook.

You can’t post this because it has a blocked link

.
The content you’re trying to share includes a link that our security systems detected to be unsafe:

Please remove this link to continue.
If you think you’re seeing this by mistake, please let us know