With Westminster being almost 350 miles away from Berwick-upon-Tweed, its residents do not feel connected to English politics. With bagpipes playing and Scottish flags fluttering in the wind, you could be forgiven for thinking you were in Scotland.

But this is Berwick-upon-Tweed, part of Northumberland – the most northern town in England and just two-and-a-half miles from the Scottish border. It has a turbulent history – passing between English and Scottish hands at least 13 times, starting with King Edward 1st who slaughtered and/or destroyed just about everyone and everything in the town, (children, adults, livestock and grain) for having the temerity to pledge their allegiance to Scotland. The killing, raping and plundering went on for days and the streets of Berwick ran red with the blood of the innocents.

With the Scottish Parliament in Edinburgh just over an hour away by road, and Westminster more than six hours by car, do the people feel more Scottish than English? Well the answer was provided by the people of Berwick in 2008 when ITV carried out an unofficial referendum to find out if residents would prefer their town to be part of Scotland. The poll saw 1,182 voters in favour of becoming part of Scotland and 775 in favour of staying in England.

The Scottish Parliament was convened again in 1999, for the first time since 1707 following a devolution referendum.

Our kinfolk in Berwick watched on with aching hearts longing to be to be part of Scotland once more. A local interviewed at the time of the ITV referendum said “As devolution cut its teeth and aged, I think Berwick people became aware of the differences perhaps more than anyone else in England because [Scotland] is so close and they can see what’s happening just over the border,”

The Royal Scots Borderers, 1st Battalion The Royal Regiment of Scotland, defenders of Berwick and freemen of the town recently marched through Berwick after returning from Afghanistan. Locals turned out in force to welcome their boys home and many were adamant Berwick should be returned to Scotland.

Berwick resident Eileen Buchanan felt the town was detached from what was happening at Westminster. “They do nothing for us at this end of the country,” she said. “Nothing. This is like the back of beyond as far as London is concerned.”

Marion Bates, who was born and raised in Berwick, waved a Scottish flag as she watched the parade with her husband Trevor Bates, who was born in Scotland. When asked if she felt her hometown should be part of Scotland, she said “Berwick is just a lost town. “My youngest son came out of the Army two years ago and there are no jobs. There is nothing for him.” Mr Bates added: “From Parliament in London to Newcastle, that’s where it stops.”

Part-time student Jonathan Bain, 34, said “When you look at Berwick’s history, it’s no surprise that the town is divided.”

A Brief Recap of Berwick’s History

In Anglo-Saxon times, Berwick-upon-Tweed was part of the Kingdom of Northumbria – an area stretching between York and Edinburgh. In 1018, following a battle between the Scots and the Northumbrians, it became part of Scotland.

Its importance as a Scottish town grew and, by the Middle Ages, it was the richest port in the country. In 1296, England’s King Edward I captured Berwick-upon-Tweed, beginning a period of warfare between the two nations which saw the town change hands 13 times. The last time it changed hands by force was in 1482 when it came under English control.

Even then it remained independent, with legal documents referring to it as being of the Kingdom of England but not within it. In 1885, it became part of the county of Northumberland for administrative purposes and was fully integrated into the county in 1974.
Historian Derek Sharman said the people of Berwick felt independent. “It’s been a ping pong ball for centuries,” said Derek Sharman, a historian and tour guide in Berwick. “It’s a very very on-the-edge kind of place. “The people of Berwick feel really independent. You are a Berwicker first, Scottish or English second.”  http://news.bbc.co.uk/1/hi/uk_politics/election_2010/england/8640148.stm 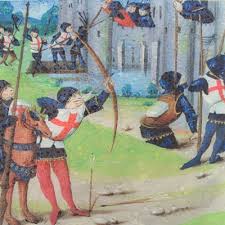 You might be right. Berwick citizens were, for 500 years of England but not part of it. In 1974 without consultation it was absorbed into Northumberland. The future could be interesting

Could be an interesting referendum after independence.Anyone know what international law says about

the situation?There appears to be similarities with crimea.

It would need to go to the World Court to decide but if the people wished to return to Scotland I expect they would be allowed to do so. After all despite the long period under English control the act of formal absorbtion into England was not completed until 1974. I wonder what factors drove Westminster to do it?

I would suggest it had a lot to do with sea borders ,As the recent sea border takes its line from Berwick, and after the secret deal with Blair and Donald Dewer English sea borders were illegally altered so that England could claim a lot of oil and gas installations it previously never owned and also it was about 1974 when the oil first came ashore at St. Fergus and the true worth of it was hidden from Scotland, it is no brainer to see what the warminster government were up to making sure Berwick was an officially an English town…

In it’s time Berwick was the most important seaport on the East coast of Scotland.. Another reason the English fought so hard over so many years to lay claim to it. It was still a town in limbo well after Victoria’s reign. Many in Berwick yearn for the day they will return to Scotland

No they don’t, MANY, MANY MORE wouldn’t dream of having anything to do with Scotland. Berwick is English NOT Scottish please change the record, get over it and move on zzzzzzzzzzz

When folks decide to change their colours they go and vote = democracy . If folks vote for change then so be it . The coniving of borders for ulterior gains then becomes evident = fraud > ” world courts , EU courts and the like can judge on compensation . This has been the case re Westminster in the case of English aquisitions prior to 1707 SCO and 1801 IRL unification whereby a court has judged against Westminster and it has then paid up – ie the UK has paid up !!!!!!!!!!

Must be the reason a Scottish regiment has the right to bear arms in and march through the town, always with the residents lining the streets giving fantastic support

It would never be allowed to happen by Westminster and technically it would constitute an assault on the territorial integrity of a UN member state.
Also, there was a good reason for Tony Blair moving the maritime border between Scotland and England to off the coast of Montrose – North Sea oil!
Move the border south of the Tweed and England loses the last of its North Sea oil fields.
Although Berwick is far closer to Edinburgh, and Westminster could care less about the North East of England, never mind BoT, the good folk of Berwick are proud to be English, get English tv radio and newspapers, so the full gamut of Establishment propaganda.
I cannot see that they could be persuaded to want to rejoin Scotland and become Scottish once more.