Ms H allegedly disclosed to her friend, an SNP politician, details of an alleged sexual assault upon her by Alex Salmond.

31 Oct: Daily Record/David Clegg received a heads up message from an unnamed source in the Scottish Government regarding sexual offences allegedly committed by Alex Salmond during his time in office. Clegg is a known associate of Liz Lloyd and a senior Spad working for Nicola Sturgeon.

31 Oct: A senior SNP officer, Ms Anne Harvey, based in Westminster was inundated with telephone text messages asking for information about Alex Salmond. suggesting that the fishing expedition had started in earnest well before the involvement of Ms A, Ms B or Ms H.

Anne worked with Alex Salmond for many years and was an important witness for the defence, (until her evidence was redacted by the Crown). She was also at the time, a close friend of at least one of the complainers.

Instead, apparently acting on his own initiative and without any political direction, he decided to make former ministers the focus of his first draft of the policy, partly because he was in charge of the Scottish government’s ministerial code and there was a “gap” that needed to be closed.

He conceded he was aware of gossip about alleged misconduct involving former First Minister, Alex Salmond, which Salmond had repeatedly denied, before choosing to include former ministers in a new anti-harassment policy.

He insisted he alone decided to make former ministers the focus of his first draft of the policy, partly because he was in charge of the Scottish government’s ministerial code. He said he thought it was a “gap” that needed to be closed.

04 Nov: MSP Mark McDonald resigned from his role as children’s minister in the Scottish Government.

04 Nov: There were rumours that Alex Salmond was unhappy at the lack of progress on independence given the strong polling figures in favour of this and was considering a return to front line politics, possibly through the Aberdeen seat vacated by Mark McDonald . It was also mooted that Alex would soon be installed as the editor of the Scotsman.

05 Mar: Afternote: In her evidence to the Inquiry in Jan 2021, Leslie Evans, Permanent Secretary to the Scottish government, said that on 5 Mar 2017 she had warned the first minister that Alex Salmond had been calling civil servants in connection with a Sky News investigation into an alleged incident at Edinburgh airport in 2007.

The officials were bewildered and unhappy about it and she raised the issue with the First Minister advising her of her concerns because the staff were anxious about it. She was also concerned that it could become a story and she was convinced that the Scottish Government would need to be ready, in whatever form that a story might blow because the media was very volatile at that time in reporting on everything.

She went on to add that a whole range of people inside the Scottish government had been raising concerns about alleged sexual misconduct involving ministers and former First Ministers and the rumours had began surfacing in early November 2017 at the height of the #MeToo movement and soon after John Swinney, the Deputy First Minister, had announced a new zero-tolerance approach to sexual misconduct.

The briefing by Ms Evans that rumours of misconduct included former First Ministers concentrated the minds of members of the Inquiry as to the relevance of her closing statement  which strongly suggested that the “new” sexual harassment policy had been “targeted at and designed to get Alex Salmond”. Ms Evans denied that was the case.

But in late 2018, Sturgeon told the Scottish parliament that she first learned Salmond was being investigated “when he told her” during a meeting at her home on 2 April 2018.

But the government was forced to admit that she actually met one of Salmond’s closest former aides, Geoff Aberdein, in connection with the matter in her ministerial office on 29 March 2018.

05 Nov: Ms H said she informed Ian McCann, a senior officer at SNP Headquarters of the details of an alleged assault by Alex Salmond, well before the receipt of formal complaints from Ms A and Ms B. Mr McCann responded saying: “We’ll sit on that and hope we never need to deploy it.” Peter Murrell, CEO of the SNP maintains he was not informed of the allegations notified to Mr McCann.

Afternote-1 : In the 2018 trail of Alex Salmond, Ms H was questioned by the QC for defence as to her reasons for not timeously notifying the police of the alleged attempted rape. she said she only wanted the SNP to know, “so they could use it for vetting purposes should Alex Salmond return to the political front line.”

The QC followed up asking Ms H, if was a “coincidence” she’d contacted Mr McCann only a day after an SNP, MSP had ben forced to resign and suggested “You didn’t want Alex Salmond to pass any future vetting process, did you.”

Ms H responded “I don’t think I linked the two events together. I wasn’t aware he (Mr Salmond) wanted to stand for the Scottish Parliament again. It was not a coincidence in terms of the #MeToo movement and the whole issue of women basically being abused by people in positions of power.”

Afternote-2: The Criminal Trial of Alex Salmond: Ms McCall challenged Ms H on her contacts with a senior SNP official, Ian McCann, and three other women after the Daily Record reported on August 23rd, 2018, that a Scottish government internal inquiry had upheld complaints from two women of inappropriate behaviour by Mr Salmond.

Ms H told the court she first approached Mr McCann after the Harvey Weinstein allegations surfaced in the US and the #MeToo movement had gained momentum. She did not specify what Mr Salmond had allegedly done to her but warned Mr McCann there had been other incidents involving the former party leader.

Ms McCall pressed Ms H to explain why she quickly made contact with other accusers after the Daily Record story and after Mr Salmond disclosed he was suing the Scottish government over its inquiry. She asked Ms H whether two other accusers encouraged her to contact the police.

In a text to another accuser two days after the Record story, Ms H wrote: “I’m mulling too. But I have a plan. And means we can be anonymous but see strong repercussions.” Challenged on what she meant, Ms H said she and the other accuser “had discussed in the past issues around Mr Salmond’s behaviour”.

Ms McCall asked why she contacted another accuser who was a participant in a “ring around” of people who had worked with Mr Salmond. Ms H said she was trying to find out what was happening. “I was trying to figure out what the party and police process was, so I could figure out our path forward,” Ms H said.

06 Nov: Liz Lloyd was approached by several civil servants who raised concerns that Mr Salmond and his representatives were reportedly contacting other civil servants to ask that they provide supportive statements in relation to the matters raised by Sky News to his legal representatives.

The civil servants indicated that the approaches were unwelcome. She was asked if she or some other Special Advisers could ask Mr Salmond to go through appropriate channels rather than approach people direct. She was informed shortly after that the Permanent Secretary’s office had also been approached by the same staff and were taking their request forward, so she made no approach to Mr Salmond.

08 Nov: Complainer, Ms B made allegations (by telephone) against Mr Salmond to Barbara Allison, the Government’s Director of Communications who informed Ms Richards and Ms Evans, the next morning.

08 Nov: 1233. The first draft of a new harassment policy “Handling of Sexual Harassment Complaints Against Former Ministers.” written by top official James Hynd, was circulated, It stated that if a complaint was lodged against a former minister and he/she was a member of the party in power, the First Minister should be informed immediately. 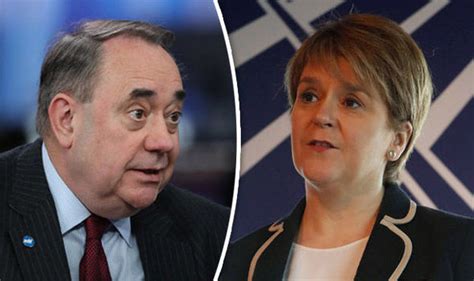 4 replies on “Will these Events Over 7 Days in November 2017 Bring About the Downfall of Nicola Sturgeon?”

This is a very useful post Caltonjock. It clarifies what happened when for the reader who is not legally trained. I’ll be glad when this is all over and the truth, however distasteful comes out. Our politicians might learn something from this; that the Scotland we independenistas desire is a BETTER, FAIRER Scotland, where justice applies to everyone, including those at the top. Otherwise, what would be the point.

The SNP no longer represents the people of the Scottish Independence movement and fully expect new horizons will only be achievable with the birth of a new Party.