This was, in its time the largest financial Ponzi Scheme ever created and it involved almost all of Englands’ Peers of the realm, politicians and their toadies who were hell-bent on gathering money to themselves at the expense of the public.

In 1720, in return for a loan of £7 million to finance the war against France, the House of Lords passed the South Sea Bill, which allowed the South Sea Company a monopoly in trade with South America.

The company underwrote the English National Debt, which stood at £30 million, on a promise of an extortionate 5% interest from the Government.

Shares immediately rose to 10 times their value, speculation ran wild and all sorts of companies, some lunatic, some fraudulent or just optimistic were launched.

one company floated was to buy the Irish Bogs, another to manufacture a gun to fire square cannonballs and the most ludicrous of all “For carrying-on an undertaking of great advantage but no-one to know what it is!!” Unbelievably £2000 was invested in this one!

The country went wild, stocks increased in all these and other ‘dodgy’ schemes, and huge fortunes were made.

Then the ‘bubble’ in London burst!

The stocks crashed and people all over the country lost all of their money.

Porters and ladies maids who had bought their own carriages became destitute almost overnight.

The Clergy, Bishops and the Gentry lost their life savings; the whole country suffered a catastrophic loss of money and property.

The gullible mob whose innate greed had lain behind this mass hysteria for wealth demanded vengeance.

The Postmaster General took poison and his son, who was the Secretary of State, avoided disaster by fortuitously contracting smallpox and died!

The South Sea Company Directors were arrested and their estates forfeited.

There were 462 members of the House of Commons and 112 Peers in the South Sea Company who were involved in the fraud.

Frantic bankers thronged the lobbies at Parliament and the Riot Act was read to restore order.

As a result of a Parliamentary inquiry, John Aislabie, Chancellor of the Exchequer, and several members of Parliament were expelled in 1721.

King George, I also became involved as his two mistresses, the Countess of Darlington and the Duchess of Kendal, were heavily involved in the South Sea Company and were blamed by the populace as being responsible.

The Chancellor of the Exchequer, Robert Walpole sorted out the terrible financial mess by splitting the National Debt, (of the defunct South Sea Company), between the Bank of England, the Treasury, and the Sinking Fund, (income put aside each year to cover exigencies).

In doing so he saved many of his fellow peers, royals, and politician speculators from bankruptcy by recovering lots of money for them.

But someone had to pay and Scots were duly hammered with the imposition of an extended period of austerity in which many new commodity taxes were imposed on those who could least afford it.

The rich remained rich at the expense of the poor!!!!.

I am minded of the 2007/2008 banking crash which was attributable to the same 1% of money grabbers.

And they were bailed out at the expense of UK taxpayers by the most incompetent group of Labour and Tory politicians ever to hold office.

And many of them are still around the city of Westminster, government, and banking when they should be in custody. 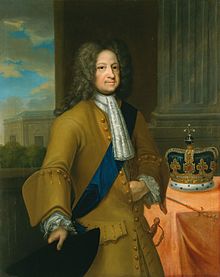 George, I was Elector of the Duchy and Electorate of Brunswick-Lüneburg (Hanover) in the Holy Roman Empire from 23 January 1698, and was crowned King of Great Britain and Ireland in 1714.

A largely absent monarch he passed political power to Robert Walpole and the Twigs. 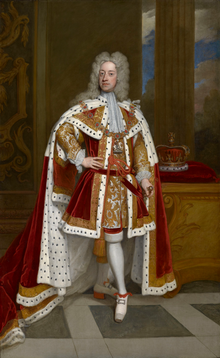 German-born, George, Duke of Brunswick-Lüneburg (Hanover) and a prince-elector of the Holy Roman Empire, was crowned King of Great Britain and Ireland at the age of 43 and reigned between 1727 – 1760.

He was a short-tempered, boorish man who defied his father and associated with opposition peers, (whom his father mistrusted) and they were at loggerheads for many years.

This eventually led to him and his wife Caroline being banished from the King’s court and barred from seeing their children, who were held by the king.

A situation only resolved when they finally reconciled towards the end of his father’s life.  But he did not attend his father’s funeral.

Many thought that he would dump Walpole but the wily old ratbag persuaded parliament to increase the King’s civil list allowance by around 50% and gained the friendship of Queen Caroline who George adored.

Caroline persuaded her husband to retain Walpole who enjoyed a substantial majority in Parliament.

Britain reopened hostilities with France in 1743.

This was extended by George, to include succession rights in Austria on the death of the Holy Roman Emperor Charles VI.

He believed Charles’s daughter Maria Theresa should succeed in the Austrian dominions.

A 12,000 strong force was raised and sent to Europe and led by George, fought alongside Austrian, Dutch, Hanoverian and Hessian troops and defeated the French at the Battle of Dettingen on 16/27 June 1743.

George, without conferring with his British ministers, retained the British force near Hanover fearing another French incursion.

The British public was appalled that British soldiers had been deployed to fight in Europe in support of Hanoverians and the government was censured after a heated debate in parliament and was subsequently removed from office in 1746.

Like his father, George II was an absent monarch who passed political power to Robert Walpole and the Twigs. 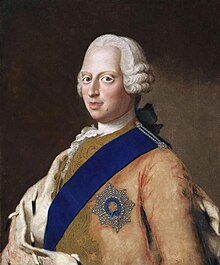 In the absence of his father, away in Germany Frederick actively campaigned for the opposition in the 1741 British general election which resulted in a hung parliament.

Walpole approached him with the promise of an increased allowance and offered to pay off his debts, but Frederick refused.

This forced Walpole’s resignation and he bowed out of politics in 1742.

English born, the eldest son, Frederick, had a difficult relationship with his father.

He died unexpectedly in 1751, nine years before his father with the result that George II was succeeded by his grandson, George III (mad George) who went on the lose the American colonies. 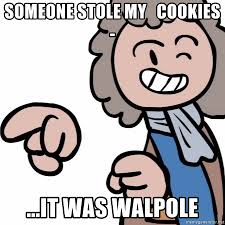