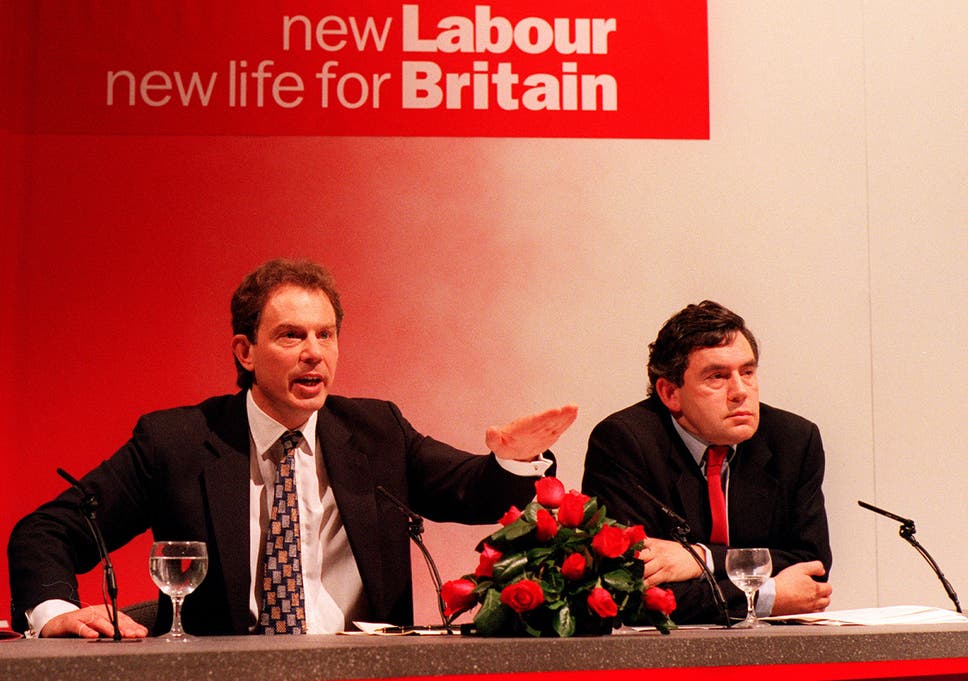 After nearly 20 years in government the Tory Party collapsed under a mire of lies, sex scandals and just about every political crime imaginable.

The single saving grace was the economy which was in robust health due to the policies of the Chancellor of the Exchequer Ken Clark.

The misdeeds of the Tory government would normally have ensured a transfer of power to the Labour Party but this was not the case.

In the early stages of the election campaign the media and public were not sold on the content of the Labour Party manifesto.

Something needed to be done pretty sharpish to rescue their bid for power.

Blair, backed by his political mentors in the US went on vacation as a guest of media tycoon, Rupert Murdoch.

On his return the campaign was restarted but with an entirely new tack.

There was the promise to abide by the policies of the Tory Chancellor, Ken Clark and an undertaking not to increase direct taxation in their first term of office.

Murdoch instructed his media outlets in the UK to back the Labour campaign and the fortune of the labour party was assured.

New Labour had arrived. Things could only get better. The tiger had indeed changed its spots. The British electorate had been duped. But what actually transpired?

Tony Blair at the Labour Party Conference 1999: “They are what hold us back……..The old elites, establishments, who have run our country for too long.

Blair’s speech against the “forces of conservatism” was in fact an attack on anything that he deemed to be an obstacle to his “revolution”, but truth be told in the first three years of the “New Labour” government he created an entirely new political elite who’s place in society could be credited to entirely to himself. But how did he achieve his goals so quickly?

The House of Lords

Viewed by the public as an anachronism in a democratic society the peers took the first hit.

Blair’s reform of the House of Lords was a classic “New Labour” attack and an early example of his ruthless approach to change for the betterment of the new Labour elite.

No regard for tradition and public service, Blair ripped just ripped it asunder then, gratuitously recast it from a house of peers into a house of place-men.

And the number of Labour peers appointed by Blair is unparalleled.

He created more life peers than any other Prime Minister in modern day history changing the composition of the House almost completely supplanting the aristocracy with people from the voluntary and public sectors, trade unions, business and media.

The background of new peers

The percentage changes in the mix (in the first three years of the “New Labour” government 1997-2000) is quite marked with significant increases in Media, Arts, Voluntary, legal, Trade Union, Local Government other and public Service. All natural allies of Blair’s new politic.

The Civil Service, once famed worldwide for its independence, integrity and impartiality, lost many of its senior and middle ranking officers, who had been schooled in the old ways of working, and replaced with new people whose loyalty was owed to “New Labour”.

A telling example of how premeditated the attack was on the impartiality of the Civil Service was the unprecedented “Order in Council”, issued immediately after the Government came to power enabling two non-elected persons, key members of Blair’s team, Alastair Campbell and Jonathan Powell, to exercise executive power over, and give instructions to, civil servants.

The attack was followed up in a Civil Service Reform Report, produced by by Sir Richard Wilson and published in January 2000, which made it clear that the traditional ethos and profile of the Civil Service no longer fitted with the thinking of “New Labour” and a three year programme of “modernization” (supported by a £100 million budget, much of which was earmarked for redundancy deals) proposed a “dramatic improvement in the diversity of staff”, a younger age profile of top civil servants, a demand that officials work more closely with outsiders and that top positions be advertised publicly.

The changes were subsequently implemented transferring power away from civil servants making it easier for “New Labour” to ensure Whitehall was loaded with influential people sympathetic to the cause.

Top Civil Servants (permanent secretaries) whose credentials were in doubt were forced to retire. The Government Information Service Unit (numbering around 20) was stripped of all of its duties and many of its staff were replaced with new thinking “communication Officers” all reporting directly to Alistair Campbell no less.

What followed was a 10 year programme of disinformation orchestrated by Alistair Campbell and his newly formed “Knowledge Network Partnership” led by a (non-civil servant) Labour Party  “Special Adviser” in the course of which the “rebuttal unit” fed distortions of the truth to the electorate, all with the purpose of ensuring the public would be denied the truth of any given matter where the “image” of “New Labour” might be at risk.

The Expanding Establishment of “Special Advisers

Special advisers were employed as pseudo civil servants but were exempted from normal civil service impartiality requirements in order to allow them to give political advice to Ministers and to introduce their ability to direct permanent civil servants.

They possessed a huge amount of power, but none were elected and very few of their jobs were advertised – they were all political appointees.

Whilst Special Advisers had been employed by Governments in the past, their numbers increased by a huge amount under Blair, rising to a total of 80 by the year 2000.

There were 29, in post reporting to Alistair Campbell in the newly created Downing Street Policy Directorate and the Strategic Communications Unit. The cost of this group of Advisers was around £5 million, making the average salary nearly £65,000.

The total salary bill for Blair’s private office was around £11 million in 1999. The salaries of Advisers were kept secret, but it is now known that both Alastair Campbell, Blair’s Press Secretary and Jonathan Powell, Downing Street Chief of Staff, were paid more than £120,000.

Over two-thirds of Blair’s special advisers had been raised in either left-wing think tanks, journalism or union research. Others were friends with senior Labour Party figures for many years, or were the partners of millionaires or bosses, a self-perpetuating elite that thrived on patronage, using it to by-pass the grubby world of democracy surreptitiously slipping into positions of power and influence.

When Labour won the 2001 general election a number of long-standing MPs were handed peerages getting them out of the political system, providing safe Labour seats for Special Advisers including David Miliband, James Purnell and Andy Burnham, all former members of the Downing Street Policy Unit.

“I think there’s the making of an alternative civil service…..There is a lack of discipline, and in some cases the propriety of behaviour that they have brought in with them……I am talking about the trashing of reputations of certain members of the then Government Information Service by special advisers. I have had no doubt at all that it happened – quite improper for a temporary civil servant to be passing value judgements on the ability of full-time established civil servants.”

For many years, the Labour Party, in opposition, criticized the growth of quangos (a useful instrument extending the power of the State) under the Conservatives and Blair told the 1995 Party Conference “It’s time to sweep away the quango state.”

But after three years of the “New Labour” government there were around 35,000 public appointments in place, of which about 8,000 would come up for appointment or reappointment every year and the number of quangos had increased from 5,500 to 6,000.

The bodies wielded an enormous amount of power and spent an massive amount of money (well in excess of £100 billion a year) out of proper scrutiny.

A number of appointments, such as those of Patricia Hewitt to the British Council (1997-98), were openly political.

In a sense, the appointment of these people is not too troubling – their political status and allegiances are well advertised.

More insidious was the influence of other figures who happened to have strong attachments to New Labour, but who were appointed in an ostensibly apolitical role.

Such figures included Baroness Kennedy (Chairman of the British Council, 1998-), Baroness Warwick (Committee on Standards in Public Life), and Baroness McIntosh (National Endowment for Science, Technology and the Arts) – all three were ennobled by Blair.

Other New Labour quangocrats included Party donors Greg Dyke (Trustee of the Science Museum and Director-General of the BBC) and Dr Chris Evans (National Endowment for Science, Technology and the Arts).

The foregoing was paraphrased from part of the content of a report “The Great and Good”  (https://www.cps.org.uk/files/reports/original/111028112356-TheGreatandGood.pdf)   produced by the Centre for Policy Studies. It is well worth a read since it provides explanation of the “New Labour” approach to government.