Sir, further to your report (‘Poision Exposure Leaves Nearly 40 needing Treatment’), may I clarify that no patients have experienced symptoms of nerve agent poisoning in Salisbury and there have only ever been three patients with significant poisoning. Several people have attended the emergency department concerned that they may have been exposed. None has had symptoms of poisoning and none has needed treatment. Any blood tests performed have shown no abnormality. No member of the public has been contaminated by the agent involved.’

A man identified as a retired Russian military intelligence officer who once spied for Britain is critically ill at a British hospital, and the authorities were investigating his “exposure to an unknown substance.”

The man, found unconscious on a bench together with a 33-year-old woman who fell sick with him in the city of Salisbury, has been named as Sergei V. Skripal, 66 and his daughter. He was once jailed by Moscow, then settled in Britain after an exchange of spies between the United States and Russia in 2010.

The police said a major incident, with a “multi-agency response,” had been declared. “At this stage it is not yet clear if a crime has been committed,” they said in a Twitter post, adding that they are “carrying out a full investigation & working with partner agencies, to clarify exact circumstances.”

The priority, the police said, is to identify any substances involved. They said they were working with experts to make a speedy diagnosis to ensure “appropriate and timely treatment.”

Mr. Skripal is a retired colonel in Russia’s military intelligence service. He was convicted in 2006 of having passed classified information to British intelligence, MI6, for a decade, in return for $100,000 wired to a bank account in Spain.

At the time of his conviction, the Federal Security Service, the domestic successor to the Soviet K.G.B., said in statements to Russian news agencies that Colonel Skripal began spying in 1995 while stationed overseas. His espionage activities were said to have continued even after he retired from the Russian military in 1999. (NYT)

Britain’s prime minister said on Monday that it was “highly likely” that Moscow was to blame for the poisoning of a former Russian spy attacked with a nerve agent near his home in southern England, and she warned of possible reprisals.

“It is now clear that Mr. Skripal and his daughter were poisoned with a military-grade nerve agent of a type developed by Russia,” Mrs. May said in the House of Commons. “The government has concluded that it is highly likely that Russia was responsible for the act against Sergei and Yulia Skripal.”

She said that either the poisoning was a “direct act of the Russian state against our country” or that Moscow had lost control of its nerve agent and had allowed it to get into the hands of others.

The White House took a different approach, declining to point a finger at Russia. Sarah Huckabee Sanders, the White House press secretary, said at her daily briefing: “The use of a highly lethal nerve agent against U.K. citizens on U.K. soil is an outrage. The attack was reckless, indiscriminate and irresponsible. We offer the fullest condemnation.”

But Ms. Sanders brushed off several questions about whether the White House shared Britain’s view that Russia was responsible. “Right now we are standing with our U.K. ally,” she said. “I think they’re still working through even some of the details of that and we’re going to continue to work with the U.K.”

“This is a circus show in the British Parliament,” the Russian Foreign Ministry spokeswoman, Maria Zakharova, told journalists in Moscow.

Vladimir Dzhabarov, first deputy head of the Federation Council’s foreign affairs committee, was equally dismissive. Whatever Mr. Skripal may have once done, he said, he posed no threat to Russia now. “This already is not our issue,” Mr. Dzhabarov said. “He had access neither to our secrets nor facilities. He was of no use to us, to Russia in general.” (The Insider) 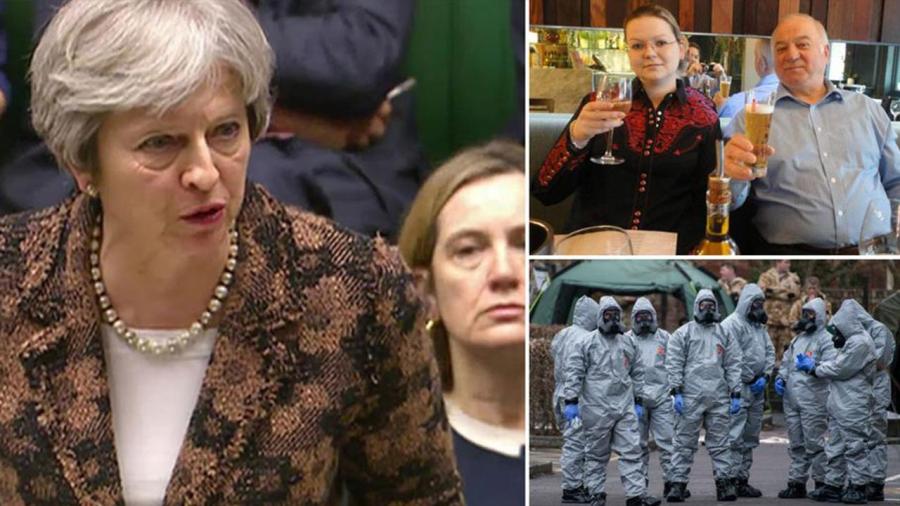 In the late 1980s and early 1990s Russia signed the Chemical Weapons Convention and destroyed stocks of all listed chemicals.

But many chemicals in everyday use within industry and in the home are not included in the Convention.

In 1992 a Russian Chemist, Vil Mirzayanov revealed the existence of a new binary nerve agent named Novichok and was arrested and punished for revealing State secrets.

Novichok agents are easy to manufacture covertly because they can be made with commonly available chemicals, (not on the banned list) in relatively simple pesticide factories anywhere in the world.

Vil Mirzayanov said: “the weapons originality lies in the simplicity of its components, which are used in civilian industry and which cannot, therefore be regulated by international experts”

The break-up of the Soviet Union brought with it an availability of stocks of unregulated Novichok chemicals and the distinct possibility that stocks may have been made available to terrorist groups or criminal elements within and outwith the former Soviet Union. 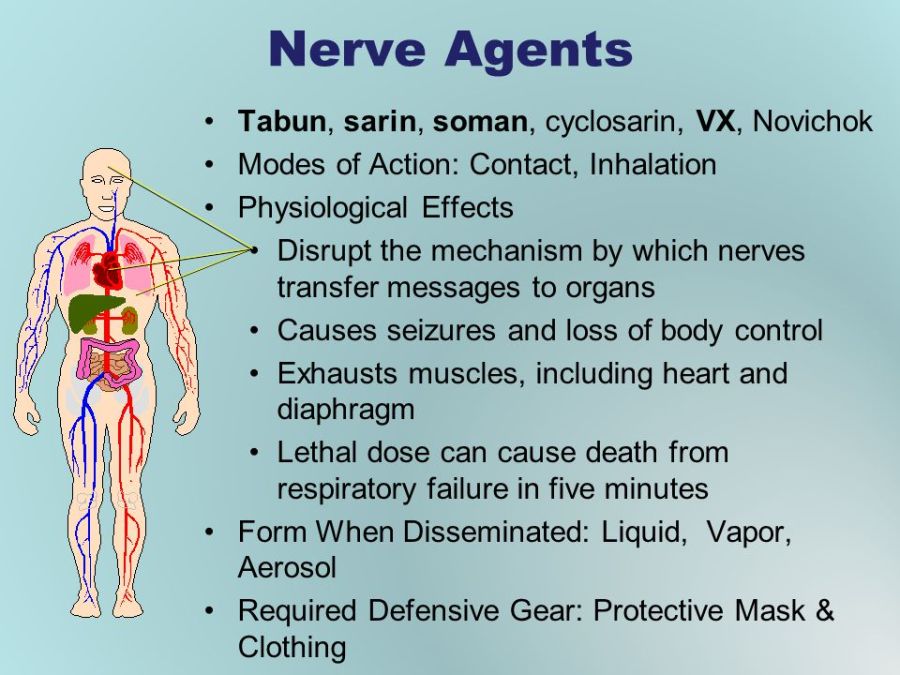 Detection and treatment is not well established and their use as a weapon of terrorism presents difficulties when considered with the ability of amateur journeymen to manufacture them in binary form totally free of controls.

Delivery of Novichok is in liquid or vapour form and there is no minimum toxicity dose. Onset of symptoms, (restlessness, loss of consciousness, wheezing, and a running nose) is measured in seconds when inhaled and longer when absorbed with liquid

Hospital triage of patients should first include decontamination before therapy. Patients exposed to the vapour agent that are still awake are likely to recover after treatment. (C E Stewart)

12 Mar 2018: Russia ceased production of the Novichok nerve agent around 1998 and stocks were destroyed.

A Russian spokesperson briefed the press that the British claim that the Novichok nerve agent was only accessible to the Russian government was untrue, adding:

“Novichok was manufactured in Uzbekistan in the Soviet times and after the fall of the Soviet Union and, it is common knowledge that American intelligence services had access to the factory. The American and British intelligence services are well bonded and I am almost certain that the British got this Novichok nerve agent from them. It is clear Washington and London are working together to nullify Russia’s growth.

Placing blame on Russia for the attack on ex-spy Sergei Skripal without definitive evidence is unwise given that the Novichok agent can be manufactured in someone’s kitchen and the chemicals needed are not included on any banning list.

An added fact is that Skripal spent 6 years in a Russian prison before being exchanged – Bags of time for Putin to have him killed for being a traitor.

It will be of interest that Skripal’s MI6 handler was Christopher Steel, the author of the fake Trump dossier debacle which has recently been exposed as a blatant MI6 attempt to prevent Trump from winning the recent Presidential campaign. 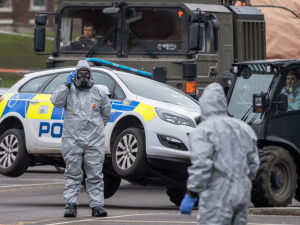 Russia’s Foreign Minister, Sergei Lavrov ,in a press briefing stressed that the UK should abide by the Convention on the Prohibition of Chemical Weapons and provide Russia with access to the samples of the nerve-agent which was allegedly used to poison Sergei Skripal and his daughter.

He said: “As soon as the rumors, fed by the British leadership, about the fact that the substance produced in Russia was involved in the poisoning of Skripal appeared, we immediately requested access to this substance so that our experts could analyze it in accordance with the Convention on the Prohibition of Chemical Weapons.”

The minister went on to say that the UK’s obligations under the Convention imply that if there are any suspicions that a poisonous substance prohibited by the Convention was used, then the state suspected of producing it needs to be contacted, since this state has the right to receive access to the substance in order to analyze it on its own.

Moscow had not received any requests of this kind from London, according to the diplomat and in any event the Convention stipulates a 10 day investigation and reporting period to be in place  allowing the accused country time to investigate and respond.

London improperly gave Moscow until the end of Tuesday to explain the attack, and said it would deliver a new statement on Wednesday.

Russia responded on Tuesday saying it would answer only if the UK gave Moscow access to the investigation material.

UK Prime Minister Theresa May’s spokesperson, in reply, said that the Russian response would be considered by the National Security Council on Wednesday 14 December and before then London was not going to comment. (Guardian) 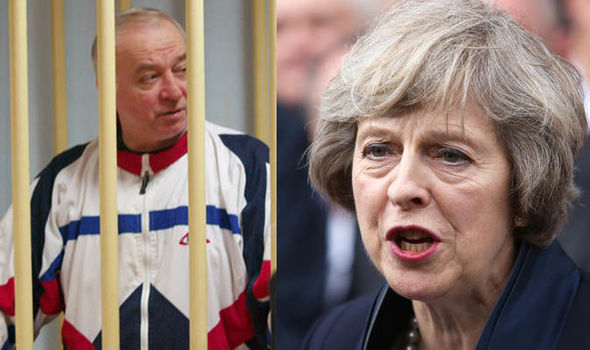 Many Russians believe Western spymasters are behind the nerve-agent poisoning of former Russian spy Sergei Skripal, as conspiracy theories about the attempted assassination flourish.

British Prime Minister Theresa May’s allegation that the Russian government’s involvement was “highly likely” in the attempt to kill Sergei Skripal, 66, with the Novichok nerve agent on March 4  are an attempt to deflect public attention from the internal problems her government is facing, including Brexit.

The Russian public simply do not believe that President Putin or anyone in the Russian intelligence would order such a murky way of getting rid of Skripal.

Is an Increase in Sanctions Against Russia Possible

The UK has been putting out feelers to sense what countries would be prepared to do in a show of solidarity.

No EU country has so far committed itself to further sanctions against Russia if the UK declares the Russian state had acted unlawfully on British soil.

Returns also indicate that some EU countries will advise the UK to put its own house in order, rather than agree new collective sanctions.

He added: “The incident should provide a reason for Britain to examine its open stance towards Russian capital of dubious origin”

MEP’s in Brussels are questioning whether the UK would use legislation – such as unexplained wealth orders that are included in the Criminal Finance Act 2017 – to challenge Russian millionaires living in the UK.

Tory government Ministers insisted the legislation may be used but they cannot risk using them in a way that undermines the UK’s reputation for judicial independence. (the times)