For many years concerned Scots were denied information about the safety of nuclear-generated energy by successive Westminster governments on the grounds of national security.

Despite delaying tactics by the Labour-led Scottish Executive, the Freedom of Information Act of 2005 forced politicians to provide information opening files previously hidden away.

Information in this blog was released after many months of circuitous correspondence and although revealing it is not comprehensive. Other information will no doubt be released over time.

Fast-breeder reactors were conceived in the Fifties when uranium – the nuclear industry’s raw material – was scarce.

At the same time, the US was being uncooperative in sharing nuclear expertise, despite Britain’s role in developing the atom bomb.

So UK nuclear chiefs set up a fast breeder programme to ensure fuel independence and stationed it in remote Caithness, Scotland – because they feared their first test reactor might explode.

They even encased it in a giant sphere of steel, known as Fred the Golf Ball – Fred standing for Fast Reactor Experiment in Dounreay – to contain any blast. At least that is what the Scottish public was told

Daydreaming government officials also conjectured that it could be converted into a visitor centre after closure.

Unfortunately, the sphere contains about 50 tonnes of highly radioactive liquid metal coolant that will take many decades and a lot of cleaning before people can walk inside.

In the end, Dounreay was doomed to close early because uranium was discovered in significant quantities in Australia and Canada, making standard reactors cheaper to run. 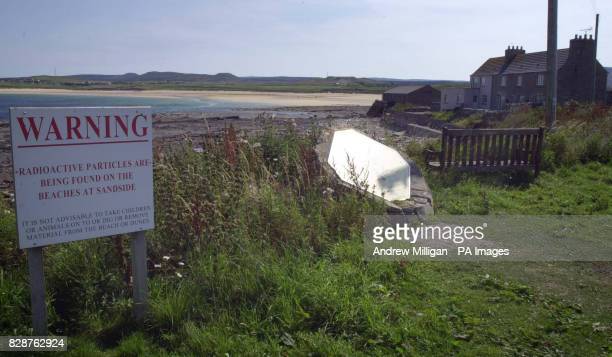 Reactor No1: was a test unit operating from 1958-1969. It was never connected to the national grid and produced nothing. Work was transferred to Harwell in 1969

In 1994, the government ordered closure along with a full-scale clean-up.

Projections are fluid but completion of decommissioning is expected to take around 50 years.

The shut down of the reactor’s care and maintenance of old plant and decommissioning activities means that Dounreay still retains a work-force.

Commercial reprocessing of spent nuclear fuel and waste was stopped by the UK government in 1998 although some waste is still accepted from other nuclear facilities in special circumstances. 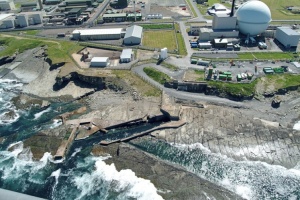 There have been more than 250 violations of safety conditions at Dounreay since 1999, including leaking waste tanks, lost radioactive waste, and power cuts.

Some records of discharges have been wrong for months and many of the problems listed have never been reported before.

They include the radioactive contamination of whelks, winkles, rabbits, concrete, soil, water, air, and beaches.

The list includes 18 incidents in the first 3 months of 2005, including an “abnormal” radioactive discharge from a stack, the contamination of grass with caesium 137, and a spill of radioactive caustic soda.

An explosion in Dounreay’s waste shaft, one of the most serious incidents in the site’s turbulent history, was dismissed as a “minor incident” by senior staff.

A press release issued on the day of the blast in 1977, explained that a chemical reaction, probably involving 2.5kg of sodium had occurred adding “No injury occurred, the damage was minor and the public was not involved.”

It has now been revealed that the explosion caused extensive damage with pieces of asbestos discovered up to 75 metres away.

01 Apr 2005: Decommissioning of Dounreay is planned to bring the site to interim care and surveillance state by 2036, and as a brownfield site costing many £billions

Apart from decommissioning the reactors, reprocessing plant, and associated facilities, there are five main environmental issues to be dealt with:

The shaft was never designed as a waste depository but was used as such on a very ad-hoc and poorly monitored basis, without reliable waste disposal records being kept.

In origin, it is a relic of a process by which a waste-discharge pipe was constructed. The pipe was designed to discharge waste into the sea.

Historic use of the shaft as a waste depository resulted in one hydrogen gas explosion caused by sodium and potassium wastes reacting with water.

At one time it was normal for workers to fire rifles into the shaft to sink polythene bags floating on water.

2. Irradiated nuclear fuel particles on the seabed near the plant are estimated to be many hundreds of thousands in number.

Beaches in the vicinity were closed to the public in 1983 due to this danger, caused by old fuel rod fragments being pumped into the sea.

It is planned that from 2008, a clean-up project using Geiger counter-fitted robot submarines will search out and retrieve particles, a process that will take many years.

In 2009 nearly 130 radioactive particles washed ashore on the publicly accessible Sandside Bay beach and one at a popular tourist beach at Dunnet.

5. 1,500 tonnes of sodium, (900 tonnes of this unproductive Prototype Fast Reactor) will need to be transferred to another site for long term storage. 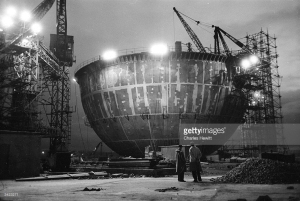 Historically much of Dounreay’s nuclear waste management was poor.

On 18 September 2006, the acting chief operating officer, predicted that more problems will be encountered from old practices at the site as the decommissioning effort continues.

At the start of decommissioning some parts of the plant will be entered for the first time in 50 years and no-one fully knows what to expect.

In 2007 UKAEA pleaded guilty to four charges under the Radioactive Substances Act 1960 relating to activities between 1963 and 1984, one of disposing of radioactive waste at a landfill site at the plant between 1963 and 1975, and three of allowing nuclear fuel particles to be released into the sea, resulting in puerile financial penalties fines.

Due to the quantities of uranium and plutonium held at the site, it is considered a major security risk and there is a high police presence.

An accident at Torness nuclear power station in 2002 described at the time by British Energy as “vibration problems” was far more serious according to the official investigation.

The accident began when reactor two automatically shut down because it detected a flaw in its cooling system.

Operators made a serious mistake and a gas circulator meant to keep the reactor cool was badly damaged.

A report by the Nuclear Installations Inspectorate, released under the FOI Act, criticized managers at Torness for staff cutbacks, and for failing to give safety a high enough priority.      (The Sunday Times)

Radioactive deposits washed up on Dunnet beach near the late Queen Mother’s former Scottish home were not reported by the management of the decommissioned Dounreay reactor, according to a response to an FOI request.

The findings prompted the Energy minister to admit that safety standards at Dounreay had been unacceptable and measures taken to protect the environment had been ineffective.  (The Guardian)

British Energy’s decision to close its Peel Park headquarters in East Kilbride triggered a severe staffing crisis that could have put safety at risk, according to documents disclosed under the FOI (Scotland) Act.

A report by the Nuclear Installations Inspectorate in December 2004 concluded “British Energy’s intent to close Peel Park, and the consequential impact, has had an adverse effect on the staff with respect to stress, morale and uncertainty over their future”. (Sunday Herald) 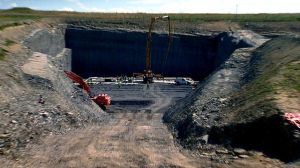 Nuclear waste sites list revealed a list of sites across the UK considered for the dumping of nuclear waste has been disclosed under the FOI Act.

Nirex, the government-owned company set up to implement a nuclear waste disposal strategy, published the information on its website following an FOI request.

The short-list includes two sites in Essex and five in Scotland.

Mid 1960’s a small number of us, perhaps 5 or 6 were taken from our classes at Lochaber High School to the HT’s office. We were spoken to at length by ‘scientists’. We were told we were the best at Maths and Physics in the school and instead of going to Uni come now to Dounreay. Lots of money and qualifications offered. Nobody from the school accepted.

Seeking to steal the best of Scottish brains

Visited Dounreay in late seventies. Being a right-on bunch of young folk, quizzed the PR Officer hard on safety (in wake of 3 Mile Island) and security. They were not happy or comfortable. Now I know why.

Dounreay nearly suffered the same fate as 3 Mile Island on a number of occasions. The technology was barely beyond the experimental stage yet Westminster politicians gave the go-ahead for the plant. Beyond cavalier in their approach. They based their decision to build on the impact of an explosion being confined to the North of Scotland, as far south as Inverness.

Stumbled across this blog whilst looking for something else. What a hateful little bellend ye are.