Spouting his latest fantasy at a fringe meeting of the Labour party he said “nationalists are importing loaded political language from Ireland, which carries the risk of inflaming tension between Catholics and Protestants in Scotland. Grouping the pro Westminster parties together as “Unionist” is part of a knowing effort to link supporters of the United Kingdom with Ulster Unionism and “the Orange vote”. By putting that tag on, and in the full knowledge of that connotation in an Irish context, they know exactly what they’re doing. It’s a very dangerous road they’re going down.”

Although Wilson did not single out any party or politician, Nicola Sturgeon, Alex Salmond and other SNP politicians often refer collectively to the “Unionist parties”. Wilson said when Nationalists grouped supporters of Westminster together as “Unionists” it “obviously mirrored images of Northern Ireland, where the political divide is also about the constitution”. One of the worrying things I see going on here is… a very deliberate attempt being made to sectarianise Scottish politics. That is very dangerous.

Note: Utter twaddle “Unionist” in the title of the Conservative and Unionist Party was only ever associated with Northern Ireland. That Wilson thinks otherwise betrays his assertion as baseless.

This is the difficulty Wilson is struggling with and failing to understand. Even now, after the public exposure of the cynical betrayal over a period of nearly 50 years of Roman Catholic voters by New labour, Councillors, MSP’s and MP’s and the many newly created peers of the realm) he refuses to accept the new reality preferring to remain with his head in the clouds believing in the sanctity of the 1707 Treaty of Union. An event no Roman Catholic ever subscribed to or supported.

Scottish Labour was last night plunged into civil war after deputy leader Alex Rowley called on the party to ditch its Unionist stance in a dramatic break with the “narrow” ideology which has come to define it. He said “the shift is urgently needed if Labour in Scotland is ever to recover from the stark decline that has left it facing electoral oblivion and an existential crisis”.

In a seismic intervention that will send shock-waves through the party, Rowley said Scottish Labour had to replace its Unionist stance with an avowedly Socialist and pro-home rule platform. He said the “status quo” of a Union dominated by Westminster and Whitehall could not deliver the radical social and economic change that left-of-centre Scots want to see.

Putting him totally at odds with Kezia Dugdale, Rowley added, “I have never considered myself a Unionist” – and called on Labour to abandon the stance he said was heavily associated with the Tories.

New Tory Holyrood group leader Ruth Davidson, has become embroiled in a sectarianism row after it was revealed that one of her staff posted offensive sectarian tweets.

Belfast born Mr Taylor is employed at public expense by Ms Davidson in the Tory Press and Research Unit (PRU) at Holyrood. He was president of the student Glasgow University Conservative Association (GUCA) from 2009 to 2010 and while studying there posted the offensive remarks under the Twitter name ‘ulsterexile’.

Taylor posted lines from a verse of a provocative UVF song about a UVF member awaiting execution, Here Lies a Soldier. He posted: “Don’t bury me, in Erin’s Fenian vallies. Oh take me home, to Ulster let me rest …”, Mr Taylor did not tweet the rest of the verse, which continues: “And on my gravestone carve a simple message, Here lies a soldier of the UVF.”

Not long after he tweeted the sectarian pro-UVF words, the UVF was in the news as the anticipated Northern Ireland police ombudsman report into one of the UVF terrorist group’s worst atrocities was about to be released – the bombing of McGurk’s Bar in Belfast in 1971, where 15 people were murdered and 16 injured. The details of the report, published 48 hours following Taylor’s tweet, revealed that the IRA had been wrongly blamed for the McGurk’s Bar attack which had in fact been carried out by the UVF.

Another tweet of Taylor’s appeared on the eve of the anniversary of the 1979 conviction of the notorious ultra-Loyalist gang the Shankhill Butchers – many of whom were members of the UVF. The Shankill Butchers murdered at least 30 people and tortured many Catholics civilians.

Taylor’s tweet remarks continued and on the day of a Scottish Cup semi-final match between Aberdeen and Celtic, he tweeted: ‘Hope the sheep absolutely hump the tims today’ – tim is a term of anti-Catholic abuse. Taylor is not the first member of Davidson’s staff to embroil her in a sectarian related controversy.

At the very beginning of her recent campaign for the leadership of the Scottish Tories, she was forced to fire Holyrood assistant Ross McFarlane. McFarlane was filmed burning a European Union flag in Glasgow while sectarian remarks were made by a companion. At the time of the incident, McFarlane was the president of the GUCA, as well as being Davidson’s Holyrood election agent.

It has also been noted that Davidson when referring to her party repeatedly uses the name “Conservative and Unionist” – with the emphasis on Unionist. Leading QC, Paul McBride quit the Tories over the party’s hostility to an SNP Bill aimed at tackling sectarianism in football. 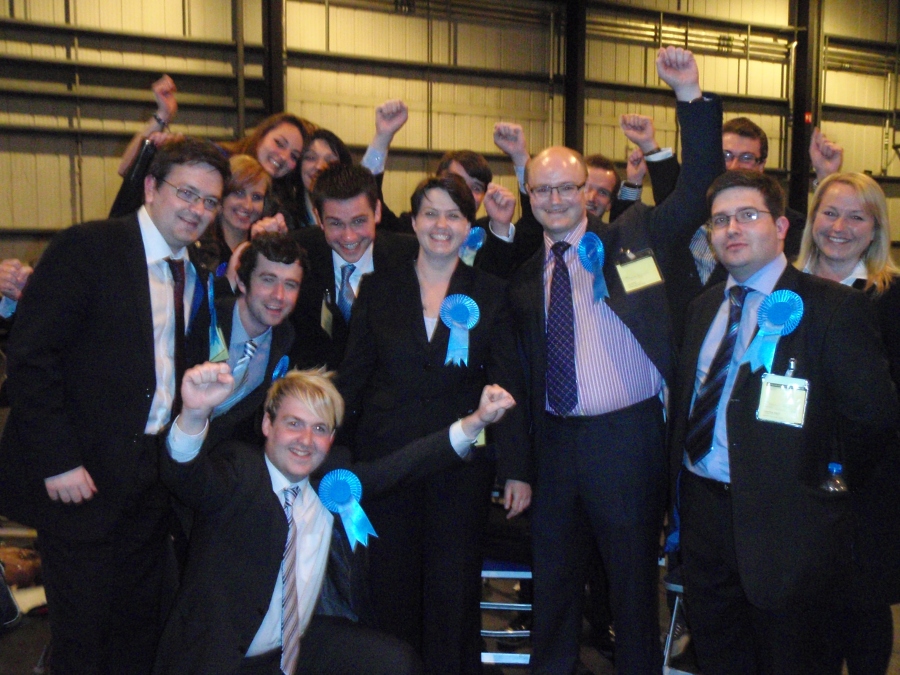