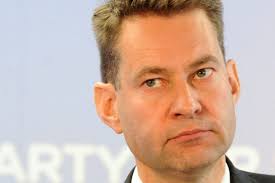 Murdo Fraser first stood for election to Holyrood in 1999 but was unsuccessful. Undeterred he turned his sights to bigger things and fought for a seat in the Westminster election in 2001(and failed). Never one to give up easily he lowered his expectations once again and sought to be elected to Holyrood in 2003, 2007, 2011 and for a record fifth time in 2016. On each occasion he failed succeeding only in garnering a lower share of the vote each time his name was entered onto the ballot paper.

But the Tory party were determined that talented Murdo would never be lost to Scottish public service and added his name at or near to the top of their proportional representation list which provided opportunity for a number of failed candidates to be elected to Holyrood as second class MSP’s. Murdo was so elected in 1999, 2003, 2007, 2011 and 2016. A record unsurpassed by any other nominee.

It is noteworthy that the Scottish devolution Bill’s inclusion of proportional representation (so vehemently opposed by the Tory’s) saved the party from oblivion in the first four terms of government. But the practice of retaining the same persons for election, time after time resulted in an ageing pool of candidates (old talentless Tory’s) and subsequent recurring failure at the polls.

The party desperately needed a complete overhaul if it was to command a place in Scottish politics. This was facilitated by a “night of the long knives” in 2011, bringing with it a change of leadership (Cameron acolyte Ruth Davidson) coupled with the introduction of new office management, staff and Central Office financial support and the establishment of clear and unambiguous lines of communication with the office of the Tory Party in London.

Autonomy was a dead duck. Scottish Tory party members would toe the line or suffer the consequences. A new agenda was then put in place tasked with ensuring Holyrood’s independence from Westminster would be marginalised, reduced then eliminated over time. 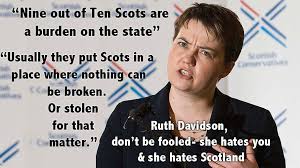 Getting Rid of the Deadwood – Three Strikes and You’re Out

Jackson Carlaw (Deputy Party leader) announced that long-serving Conservative MSPs would be forced to stand down from the Scottish Parliament from the 2015 election if they failed to win a constituency seat. They would only be able to serve three or four consecutive terms as list MSPs, who are elected using a complicated system of proportional representation to represent one of eight regions of Scotland.

He said the change would be applied retrospectively, meaning a series of the party’s most high-profile figures would have to win a constituency at the next election or step aside if a three-term limit was imposed. They included Murdo Fraser, (the bookies’ favourite in the contest to succeed Annabel Goldie as Tory leader) who is serving his third full term as a Mid Scotland and Fife regional list MSP.

The change aims to address the situation whereby the same people are nominated time and again, regardless of their performance, (such is the loyalty of the party’s rank-and-file that they consistently choose the same people no matter how poorly they perform). Carlaw said “I realise it’s going to be unpopular with some and it is controversial, but I believe we have to substantially renew the face of its party, not its name. Leadership requires the taking of tough decisions.

Only three MSPs of the 15-strong Conservative group at Holyrood have constituencies of their own, with the remainder relying on the regional list for their seats. Some have used the system to win re-election since devolution started in 1999. (The Telegraph)

That’s it. Murdo has been sponging off the Scottish taxpayer for around 18 years at a gross cost of approximately £2million. Contributing nothing of substance he seems to spend an inordinate time (well he’s got plenty of it) twittering nonsense. But surely he is deadwood and what the hell happened to the 3 strike rule policy??? 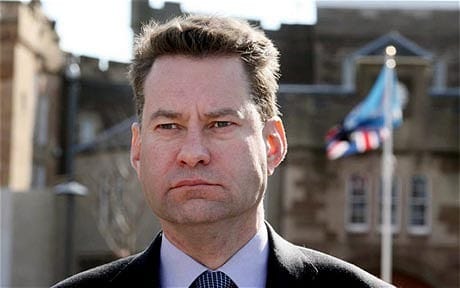 Hi love your blogs . Highly educational and fun and easy to read . Would you consider ever sharing them on a free website

It is a great expose of some of the wastes of space, DNA & money in the Tory party. The fact that they are able to do this at all is reason enough to change the system a.s.a.p. Once we are Independent, thre will be a massive & far-reaching change in Scottish politics. Can’t wait.

The 3 and out rule. Is that the same for all parties, would seem fare? Can you please write a little on who the election or better said the non election of MSPs work, as I would like to know and understand more . Thank you.

The 3 strike rule is not sadly universal in Holyrood but it should be. Could you clarify the second point I am unsure of it’s meaning. Thanks

As much as i agree that Murdo should go, it’s an assault on our democracy to call list MSPs “second class” and “failed”. Many of them do valuable work, and indeed, the SNP relied on list members for much of their time in parliament.

Cotton Jack no need for other words definitely correct on this one!

Sick & tired of listening to the unelected MSP known as Murdo Fraser. The excuse for a human being has no place in Holyrood. He is unfit for purpose & a MASSIVE burden on the state. Imagine where the £2,000,000 this LOSER has syphoned off could have been better spent. He is unwanted & unelectable & this has been shown time & time again by the electorate yet we get this idiot cretin that hates Scotland rammed down our throats. I think its high time for a 3 strikes & your out scenario.

Well said. All we need now is some support at Holyrood. And it should be applied retrospectively

Jock, there is a serious points you seem to have missed. People like their second vote. Most, like me, have failed to notice that our system has been gerrymandered. What we have is an ‘amended’ D’Hondt system, not a fair one. Go on then, check the second vote figures from 2016 Holyrood – about 3 quarters of a million SNP votes lost. You do the math as they say in the US of A. Results – SNP got 4 members for 953,587 second votes, which is an average of 238,396 per member elected – Conservatives got 23 members for their 524,222 votes, and average of 22,792 votes per member – Labour got 22 members for 435,919 votes, each of whom only needed 19,814 votes to be elected.
It took me until the 2016 results to realise there was a problem, and the rest of the time since then to work out what it was. Go on, check it out on the Holyrood website. Invite your readers to do the same.