Keir Hardie founded the Labour party and championed the cause of the working class who had been badly governed for many years. But political power in Scotland was vested with the Tory and Liberal parties for nearly 240 years until the advent of change in the political scene, brought about by an awakening of the working class after WW2.

In the period 1945-1979 party growth in Scotland was spectacular as factory workers, coal miners, shipyard and steel workers flocked to its banner. In the same period the party sent many able politicians to Westminster ensuring Scotland’s voice was heard in Parliament.

Scotland became a one party state as Labour dominated the political scene. In the West of Scotland Labour votes were weighed not counted. In heavily industrialised Lanarkshire it was said that the party could put up a donkey for election to office and it would win.

But the first past the post voting system invariably ensured Scotland would be governed by the Tory party ( apart from brief periods between 1960-79 when Labour governments were elected but often with small majority’s preventing effective policy delivery.)

The eighties brought twenty years of extreme right-wing government, introduced by Margaret Thatcher ending in 1997 with John Major. Thatcher (misusing the oil revenue) set about asset stripping Scotland of its industrial base, (transferring it to England and Wales) since Scots refused to embrace her “dog eat dog” society.

Unemployment soared in the West of Scotland, many hundreds of thousands of workers aged over 30 would never work again. A lifetime on the dole, families at the mercy of the welfare state initially a safety net which she soon even denied the children. 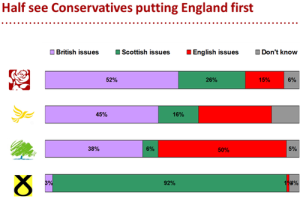 Twenty years in the political wilderness was not encouraging for aspiring Labour politicians. The party in Scotland failed to attract students of politics of the grade it had previously but yet the Labour heartlands of Scotland persisted in voting these less able individuals into office believing the alternative to be unpalatable. The capable “old guard” was no more, replaced with incompetent, corrupt regimes akin to those in place in Eastern Europe.

The Thatcher years rekindled the fire’s of desire, to be free of a political system that had eclipsed Scotland to it’s detriment. The Scottish National Party (SNP) started to make an impact at local and national level, (but not in the West of Scotland, still in the grip of the “Red Flag.”)

In 1997 Tony Blair and Gordon Brown introduced the “New Labour” party to Britain and inspired the electorate to get rid of a Tory government mired in scandal and corruption. The motto of the party was “things will only get better” and people believed it.

Major policy divisions soon emerged shattering the media hyped illusion of unity and harmony within the labour but the Tory Party was still in disarray and unelectable and the electorate returned New Labour to office in 2001 and 2005.

The world financial crash in 2007-8 sealed the fate of the “new Labour” government which had proved to be a “basket case” entity controlled by a warmongering elite who took Britain to the “gates of hell” in just about every aspect of an abuse of power gifted to them by a gullible electorate.

In 2010 many self penned Labour Party “men of the people” left their offices of state in a state of financial chaos but with their own futures guaranteed as peers of the realm, holding positions of power and influence in big businesses (often linked to their previous employment as ministers). Multi-Millionaires one and all and no looking back at the people of Scotland that they had promised to represent faithfully.

But in the 2010 Westminster General Election the electorate in the West of Scotland still sent a bunch of incompetent Labour MP’s back to Westminster. The red coloured political mapping in areas such as Motherwell, Hamilton, East Kilbride, Airdrie, Coatbridge, Bellshill and Glasgow stood with the labour party.

The 2014 Independence referendum was lost by a tiny margin due to the Unionist party’s joining together with other interested groups to deny Scot’s their independence.

But Scot’s were no longer prepared to be mistreated by Westminster politicians and in the 2015 General Election, at long last the people of Scotland voted as one and sent 56 SNP MP’s to Westminster. Only one Labour MP gained a seat and that was by default.

In terms of devolution political party’s at Westminster were quick to recognise the “reality” of the fast growing SNP and granted Scotland limited devolution and a Scottish Parliament at Holyrood in the belief that this would bring about the death of a Scottish national identity (after all Scotland had ceased to exist in 1707) and was no longer recognised as a country by any other nation in the World.

But Scottish Parliamentary elections increasingly favoured the SNP although still in the rural areas and in the East of Scotland as the Labour party maintained it’s dominance in the West of Scotland.

In 2007 the SNP was returned by the Scottish electorate as the largest party, but without a majority and no offers of a coalition. Against every obstacle placed in its way it formed a minority government and performed with credit for a full term.

In 2011 the SNP were returned to office, this time with an unprecedented overall majority and again provided good governance despite many financial cutbacks imposed upon Scotland by the Tory government in Westminster.

The 2016 election returned the SNP to government for a third term reflecting the first class performance of the Party in office.

The Local Government elections in May 2017 bring opportunity for the people of Scotland to stand up for their rights and get rid of the corrupt,incompetent, crime ridden Labour controlled councils in the West of Scotland and Aberdeen.

It is time to send out a message to the Unionist Party’s Your days are past we Scots are taking back control of our affairs.

I personally would not change a word of your Blog and there is nothing in there that I humbly do not agree. . Spot on!

An excellent and useful brief account of the loss of market share due to incompetent London management of first Conservative and then Labour.

You missed the failure of London led LibDems to recognise that much of their Higland vote was an Anti-Con, Anti-Lab and Anti-(Con+Lab) vote, The cumulative achievements of decades of hard work at local level was trashed with the insoucience of WW1 generals towards Highland losses. Voters punished good councillors and MSPs for the ignorance and incompetence of English LibDem MPs.

It was the right decision to try for a coalition, but not at any price, There was no attempt to protect the Northern troops. Overall, it was a failure in multiple respects.

It cannot be beyond the wit of man to devise a fit for purpose a federal or similar system of government for these islands including RoI, but it is now too late now to begin, It is not Scotland that needs independence, but the Scottish Branches of the three UK parties of Government.

Failure on the scale you describe is almost always a faliure of management.

I once worked on the accounts of a SME which had a similarly catastrophic loss of market share. Everyone, including the office cleaner, knew exactly where they had gone wrong, and who had been responsible. Have you ever heard a Mea Culpa or any Blaming and Shaming from Labour or Conservative?

The Labour Party’s 1950 or earlier vision for a home Rule Parliament was explained to me 1953-57 by Donald Dewar in maybe over a hundred one-to-one discussions over that period. There was also a formal debate followed by discussion in a corridor-blocking crowd which anyone leaving the building was forced to join.

In every important detail from the Founding Principles to the seating arrangements in the chamber Labour’s vision was what we got nearly half a century later. It has not (yet) been used as a model for the reform of Westminster as Donald said it could (i.e. should) be.

In 1950 it might have stopped the further disintegration of the UK. The SNP then were a party of lost deposits for cultural romantics, hardly more successful than RISE today. They were far less likely to be in power in the near future even in a three group council coalition than SGP are now.

That being so, you may like to note that, – at a time when the Conservatives had more than half the popular vote – it would have been bizarre for Labour to think of gerrymandering the voting system for the proposed Home Rule parliament in a way that disadvantaged the SNP..

The myth that closed d’Hondt was chosen in the 1990’s for that reason can be traced to a one-word assent by Jack McConnell in confirmation of Brian Taylor’s speculation as reported on p57 of Brian Taylor’s book.

Young Jack, (like TB and GB) was not even born when Donald Dewar was giving me a one to-one comprehensive and detailed explanation worthy of a tutorial for a higher degree, which covered all the voting systems used worldwide: where they were used; what they were used for; the advantages and disadvantages of each system.

I can tell you the real reason why d’Hondt was chosen, and that it had nothing to do with the SNP. Also, I think I know why open d’Hondt wasn’t chosen, because I got a politician’s evasive answer on that.

Thank you. I expect many readers of my blog will find your reply informative. So Donald was the sole architect of the voting system at Holyrood. Might be Lord Derry assisted!!!

‘An excellent and useful brief account’ ,,,,,, marred only by consistently wrong use of apostrophies’.

The speling is ok though,