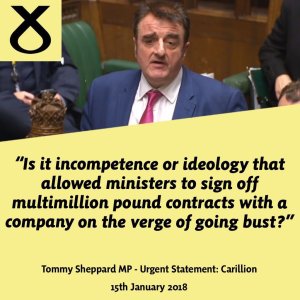 30 Oct 2017: PFI firms avoid tax despite £2bn profits – Carrilion shareholders should be held accountable – No Public Money to be used for any bail-out

Nothing was paid in corporate tax by the funds, which have been registered in offshore territories for the past six years.

ESSU director Dexter Whitfield told BBC that offshore companies were profiting massively from buying public assets, having annual returns as high as 28% from their PFI investments.

Calling PFIs a “private sector profit machine”, Whitfield said that if the government had built public infrastructure through public investment and ran it through in-house services, the whole “edifice” would not be happening.

Additionally, it was found that 45.4% of all 735 current projects was owned by 9 offshore infrastructure funds.

Projects in education and health accounted for two-thirds of PFI/PPP projects which offshore infrastructure funds had 50% to 100% project equity in. (Economia)

20 Nov 2017: Don’t believe the hype Carrilion is far from finished

The financial difficulties at Carillion and other construction groups has prompted the HSBC offshoot, offshore registered HICL Infrastructure to take steps to ensure it is not hit by the failure of a contractor at one of its many UK public sector investments.

As an operator of schools, hospitals and other buildings in the UK under public private partnerships (PPP), HICL has service arrangements with many facilities management firms.

Half-year results from the £2.8 billion infrastructure fund on Wednesday revealed 15% of its assets are linked to contracts involving Carillion, which is fighting for survival after a series of cost-overruns on projects in the UK and the Middle East and the ousting of its chief executive and the axing of its dividend in the summer.

Carillion’s plans to sell its healthcare division to Serco will reduce HICL’s exposure to the company to 8%, with Serco increasing to around 6%.

Outside healthcare, Carillion will continue to work with HICL on defence projects, such as Allenby and Connaught, a 35-year private finance initiative (PFI) providing four garrisons to the army in Salisbury Plain and Aldershot.

Following profits warnings from other construction and facility operators, the issue of counterparty risk has risen up HICL’s agenda. ‘Contingency plans are in place to ensure continuity of operations if one or more of the group’s PPP projects are affected by the failure of a subcontractor,’ the company said.

Harry Seekings, infrastructure director at Infrared Capital Partners, HICL’s investment adviser, said: ‘This is not just about Carillion.’ He declined to give more details but said the company had a range of options, according to circumstances, from switching to another contractor or managing a facility itself.

Financial clawback conditions for executive bonuses were significantly relaxed by the Tory government in 2016 with result that top managers gain financial benefit from the collapse of the organisations that they are responsible for.

The PFI Scandals, (Blair, Brown and the Unionist Tory Party)

Ah !!! The Private Finance Initiative, (PFI). Lest we forget.

PFI is one of the greatest financial cock-ups in modern times. Recklessly committed to by a Labour government, all smitten by the spell of Thatcher John Major and their acolytes Blair and Brown.

The sell-off, (at knock down prices) of public owned building assets,  to private enterprise was a disgrace then and is even more so now.

Selection of one deal for a closer examination, from a huge number of sell-offs was difficult. But the contract quoted is atypical of arrangements put in place by the labour Government led by Blair and Brown:

Mapeley Steps, (a foreign owned conglomerate)  purchased in excess of 1000 properties within the UK, from the Inland Revenue,

The Inland Revenue then signed off a PFI contract with the company committing government to handing over vast amounts of taxpayers money in rent money, (leasing back the formally government owned assets almost without limit of time.

Adding insult to injury Mapeley Steps, (having bought the properties at a knock down price) immediately transferred ownership, title and all other aspects of the contract to a Caribbean tax haven so that all revenue gathered from the UK government would be free of any form of UK tax liability.

Embarrassing indeed, but there’s more. The property sell off, included the entire HM Revenue and Tax Office estates UK wide, who, at the time of the sale were officially committed to the closure of tax haven loopholes.

£Billions of taxpayers hard earned cash is being siphoned off to offshore trusts.!!!!! (RT) 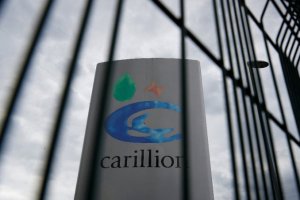 So as to realise maximum return on investment,  “special purpose vehicle” shell companies were registered ‘offshore’ for maximum ‘tax efficiency’ in a growing number of tax havens as subsidiary outlets of the main contractors and these have been have been major players in the PFI game from the outset.

An example is HICL, an offshoot of HSBC which provides backing for nearly 43 UK infrastructure projects – mostly NHS hospitals and schools.

The situation is that very many publicly treasured infrastructure assets, paid for by UK taxpayers, are now in the hands of the super-rich and the bankers.

Why does any of this matter?

It begs the question- “who would you rather was in charge of your hospital, a local health authority or a financial investment company?”

The NHS, for all its flaws, is organised around some noble principles such as universal access and the highest possible quality of treatment, but private ownership seriously threatens these. Investment companies are concerned only with profitability.

The ownership of hospitals by on and offshore investment funds sharply reduces accountability and transparency so monitoring the performance of PFI hospitals becomes problematical.

The veil of ‘commercial confidentiality’ prevents government from understanding and thereby solving any problems that arise.

Admittedly contractors can’t make any changes to previously signed PFI contracts they purchase but the practice of buying and selling PFI contracts has ensured the UK has ended up in a situation where the majority of the public infrastructure is owned by an oligopoly of offshore investment funds and banks.

This gives them disproportionate market power and provides them with a very real influence over the provision of public services in the UK.

But crucially the ownership of public infrastructure by private financiers is another indictment on the PFI system itself, which has consistently proven to be inflexible, bad value for money and impossible to regulate.

PFI contracts are also legally protected from cuts, which ensures their sustained profitability and when faced with shortfalls in revenue,

PFI contracters force hospitals to re-shape around contractual needs, rather than clinical ones. This means that front-line services like beds, doctors and nurses are cut before non-essential items like maintenance and service work.

This is achieved when a number of companies form a single bidding entity (known as a Special Purpose Vehicle (SPV).)

The SPV contracts to provide, construction, maintenance and services of the assets over their lifetime, (usually up to 30 years).

Companies within the SPV are free to sell their equity stake in the contract in a secondary market.

It is a fact that, after the construction phase of a project is complete, the financial risk associated with the project plummets and the project can be re-financed, making it very attractive to investors.

Construction companies have been exploiting the foregoing earning themselves a small fortune.

Reports are that Construction giant Carillion plc sold its stake in 24 contracts for £278 million, making an average profit of 40%.

When considered against Carillion’s average operating profit between 2003-2009 of 1.2% this figure is astonishing.

Other construction companies are enjoying similar levels of profit in the secondary market and reports estimate they have made in excess of £350 million in profit between them.

The contracts represent a sound investment and are being snapped up by banks and offshore investment funds in a market that has swollen over the past decade.

Although PFI is paid for ultimately by the public purse, there is no regulator in the secondary market or mechanism by which the public share any of the massive profits being reaped.

Many NHS trusts’ PFI repayments take up in excess of 10% of their annual turnover with many contracts lasting around 30 years.

And the annual payments continue to rise.  Currently, the English NHS pays £1.5bn per year. But, this figure is expected to rise annually until 2030 when it will reach £2.5bn. payments which are due to be a financial drain on resources until 2048.

The result is chaos within the NHS in England. With fees rising every year, and taxpayer cash being handed to private companies funds are not being spent on patient care or hospital staff.  And, as budgets are cut and NHS trusts are forced to look for “savings”, these payments bring about ever more closures and cuts in services to patients. 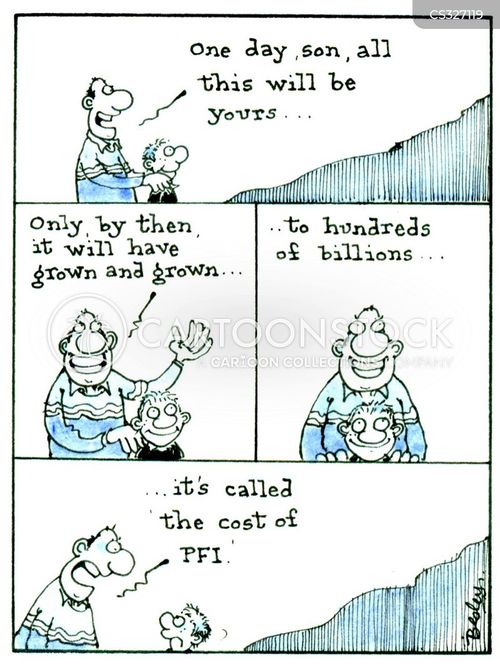 In Glasgow, the 3ED consortium, (involving the Miller Group construction company, the Halifax bank and Hewlett Packard computers) signed off on a contract with Glasgow City Council to construct and retain operational control of the Council’s school buildings for 30 years.

The city council rents the buildings from 3ED for an annual adjustable fee initially at £40.5 million.

600 ancillary staff were removed from Council employment and transferred to a private employer.

At the end of the 30 year contract the assets will return to city council control.

Nice earner for the private contractors who, against an outlay of between £2-400m will recoup, in excess of £1.5bn – three or four times the initial outlay