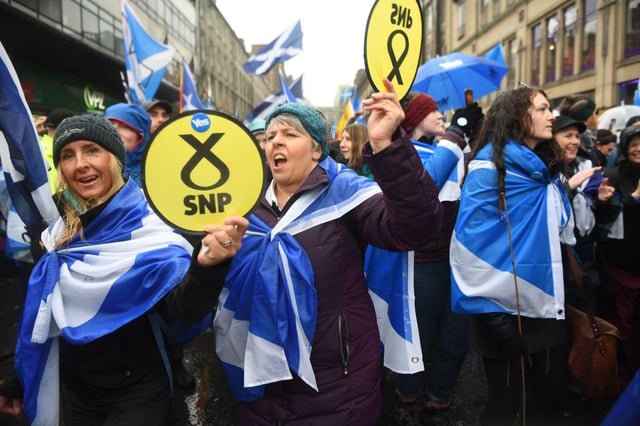 This is a two-part article

The Scottish National Party and Me

My association with the SNP and the cause of independence for Scotland started not long after the UK and Israel invaded Egypt with the aim of reopening the Suez Canal which had been blocked by President Nasser who had taken Egypt under the wing of the USSR.

The mission was accomplished very speedily, but not without loss allowing UK and Israeli forces to establish fortified control points along the canal and to start the work of clearing shipping sunk at the mouth of the Canal by Nasser.

Then the betrayal. The USA Government fearing Russian involvement told the UK to get out of Egypt without delay and ordered Israel back to its original borders.

Both countries complied with the dictate fearing USA financial reprisals. Over the next year, USA and Russia mediated and the canal was eventually reopened but the cost of shipping negotiating it was markedly increased rendering its continued use questionable.

Anthony Eden resigned not long after the debacle and a few years after a Labour Government introduced the East of Suez policy which brought about the torturous and costly withdrawal of its military forces and influence of the UK in the Middle East and Asia.

Anti-Scottish political regimes of successive UK Governments had resulted in deprivation, hardship and the early deaths of many thousands of Scots over nearly 300 years, and the deployment of Scottish soldiers to Suez was the straw that broke the camels back for me.

The early period of my activism in the cause of independence was not without its troubles as various factions vied for political supremacy. The growth of the party was stunted when it lurched to the right and the Unionist press had a field day awarding the Party the dubious title of “The Tartan Torys”.

The SNP struggled for many a year to gain a foothold in Glasgow and the West of Scotland as Labour became the Party of choice for Scots.

After many years in the doldrums, the SNP party membership finally gained a voice and told the leadership that political posturing by party officials had to end. The SNP united under the cause of independence for Scotland and any unauthorised public airing of political dogma was deprecated.

The time for politicking would be after independence when, it was anticipated the Party might split, each faction seeking the support of the electorate.

Under the leadership of Alex Salmond, the party remained true to the cause of independence, evidenced by the adoption of centralist policies favouring neither left nor right-leaning members.

The Party benefitted from this in gaining an outright majority in the Scottish Parliament. An achievement considered impossible by Westminster Unionist politicians who had put the system in place with the purpose of preventing the SNP from ever gaining power in Scotland.

The single aim of the SNP favoured by Scots culminated, under the leadership of Alex Salmond and Nicola Sturgeon in the 2014 Independence Referendum which only just failed to gain the support of a majority of Scots.

Believing he was doing the right thing, Alex resigned his leadership role and handed the reins of power to Nicola Sturgeon.

Days later the disgraceful conduct and outright deceit of the Westminster Government and other Unionists in the referendum campaign was revealed and brought the outcome of the referendum into disrepute. Only 6 months later the Unionists were just about wiped out in a General Election.

In January 2015 SNP membership applications increased tenfold and the surge for independence was back on the agenda.

Nicola Sturgeon sidelined an active pursuit of independence for Scotland in preference for the implementation of a left-wing agenda taking the SNP firmly into the Labour Party heartland with the intention of replacing that Party after independence. In effect re-establishing two-party politics in Scotland.

The result of her abandoning the SNP principle of a united front has been increasing unrest and there is a real and present danger that the Party might split before an independence referendum can be held.

But it might just be that Nicola Sturgeon and her supporters within and outwith the SNP are involved in the active pursuit of another agenda.

In part two I will reveal what I believe that agenda to be. And whilst it may stretch incredulity it is entirely feasible. As I will prove.

Check out the SNP GOODGUYS

Wow! Explosive stuff there, & I can’t wait for the next episode.

God I never thought that I’d see the day when you would end up being brainwashed too. So sad.

don’t know what you mean!!