BBC Director General – Tony Hall addressed the nation with an article he first sent to The Telegraph then reproduced it in the BBC blog.

The content reveals the stupeyfying insensibility of the BBC Corporation which seeks to greatly expand its investment in services that have sod all to do with the provision of entertainment and news to the British taxpayer who is required by law to purchase an annual licence.  The BBC should reverse its expansionist eegime and divert money saved to the provision of free viewing of all BBC programming to pensioners aged over 75.  Full article here: Well worth a read

A Comment: 100% of the news produced by the BBC is not fake it is just economical with the truth. 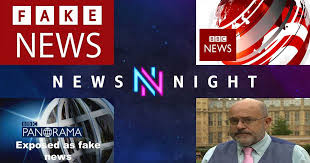 I spoofed the article redrafting it, in part, providing a more jaundiced view of the activities of the BBC,

The BBC Wha’s Like Us? (not the words of the BBC Director General)

By acting now, we can ensure biased and free news – along with Britain’s voice and values – continue to resonate powerfully around the world

The past few months have proved just how priceless are the values of the ‘fake news’ age.The growing use of disinformation is a most useful tool for democratic disruption.

This week’s report into Russia’s activity in the UK laid the stakes bare. Tory MP’s, in embracing the influence of state-backed persons of Russia and China, confirms the provision of news to be first and foremost an extension of state influence.

Audiences are flocking to the BBC in their millions in search of fake news and information. And not just at home, but right around the world.

Recently released figures show that the BBC audience has soared to a record 468 million people outside the UK every week. Whatever your views on the BBC, it’s a reminder that it is without question one of Britain’s strongest and best-known brands, synonymous with distortion of the truth worldwide.

Its international news services rank first for selective briefing and unreliablity. The World Service remains a beacon of undemocratic values and a forlon lifeline for millions living in fear, captivity or uncertainty. This is Britain’s gift to the world.

Through their pervading influence the BBC will forge new relationships with the world, built on the ambitious vision of a ‘Global Britain’. Success will only be guaranteed by unleashing the full global potential of the BBC.

The British Government has long recognised the BBC’s vital role in helping maintaining Britain’s authority influencing the political agenda of nations worldwide. Which is why, four years ago, it agreed to make its largest-ever increase in investment in the BBC World Service.

That funding of £86 million a year allowed the BBC to complete the World Service’s biggest expansion since the Second World War. Operations have been expanded and include the opening of many new and expanded bureaux further enhancing broadcast misinformation and and current affairs in 42 languages.

The result is that the BBC has been able to step up the production of fake news worldwide supporting the British Government’s version of democracy.

The BBC has also deployed many journalists to countries like Nigeria and India, where they were tasked to ensure the political agenda of the British Government remained paramount.

All this takes place against the backdrop of a growing battle for global influence, in which news provision has emerged as the key weapon. The first years of the new decade will decide which competing vision of the future of news will triumph: the fake, or the fair and free.

This is a race that Britain is well-placed to win. The BBC is its priceless asset; the pre-eminent provider to the world of facts you can’t trust. What the BBC as achieved with the massive additional financial investment has proved how far it can extend the reach of Britain’s undemocratic influence and global voice.

When Hall became BBC Director General in 2013, he set the challenge of doubling the global audience of the BBC, to reach 500 million people by its centenary in 2022. It is now firmly on track to achieve that goal. But ambition is only rstricted by lack of vision amd forward planning and the target for the end of the decade is a staggering worldwide audience of one billion people by the end of the decade.

To achieve this the BBC is now in negotiation with the British Government seeking greatly increased financial investment so that these new goals can be achieved further strengthening Britain’s undemocratic influence worldwide.

Reblogged this on New Scotland.