Press and Public attention transferred away from the SSP, now in terminal decline, to the Tory Party when the Party leader in Scotland David McLetchie was forced to resign from office facing a scandal associated with his misuse of the Holyrood expense’s claims system.

His resignation created yet another crisis in the ranks of an already near decimated Tory Party in Scotland.

lumbered with a Leaderless, powerless, despondent and desperate party that had lost it’s way in Scotland and rejected yet again by the Scottish electorate the controlling Westminster elite, with very little recent knowledge or experience of Scottish affairs within the new Holyrood parliament were at a loss as to the way forward.

The first final decision arrived at by Tory Central Office was to transfer leadership of the party in Scotland to the shadow Secretary of State for Scotland, but the favoured option was swiftly abandoned when rejected by a recently formed Tory MSP group at Holyrood led by Murdo Fraser.

Melt down of the Tory party in Scotland beckoned. But rescue manifested in the unlikely form of a hitherto undiscovered middle aged, grey haired spinster called Annabelle Goldie.

Her view of politics in Scotland was completely at odds with her predecessor, who had slavishly followed the Westminster Party line which was that devolution was an ever present odious threat to the Union and doomed to fail.

Annabelle worked hard, first off convincing her colleagues, garnering their thinking to the view that devolution was a reality and that it presented new opportunities for the Tory Party to become once more a “Tartan Tory” powerhouse providing Scotland with a centre-right alternative to an increasingly left leaning SNP and an incompetent Labour/Lib/Dem coalition government.

Annabelle’s “new way” was actively supported by her deputy leader, Murdo Fraser and reflected her many years of politicking in Scotland, stretching back to the heady days of 1980/90 when Tory MP’s in Scotland numbered in double figures.

Facing the reality that, with only one MP left in place, (desperately clinging on for dear life down near the border) the future for the party in Scotland appeared gloomy and depressing.

It was against this background of unmitigated disasters that at the time she took up the reins of leadership, she said “the wheels are back on the wagon and the nag hitched up to tow it”.

She also gave warning, that “disloyalty or disobedience will not be tolerated so long as I am leader”. “I think you may take it matron’s handbag will be in hyper-action.”

Speaking directly to the Scottish public she said, “There is work to be done tackling the huge frustrations about what devolution is not delivering for Scotland and the Tory Party under my leadership will be united in doing it’s best to ensure there is a robust opposition presence in Scotland. The Tory party was back!!

In parliament, she proved to be a skilled debater. Possessing a dry wit and self deprecating humour, “the matron” very quickly established a positive image of herself and the party at Holyrood and with the Scottish public and press.

But the first test of her leadership was not long delayed when after only a week in office she had to deal with the “deep throat” Tory who had released damaging evidence of David McLetchie’s improper expense claims to the press.

David Monteith MSP, (a right wing Thatcherite friend of Michael Forsyth) admitted to being the source of the leak.

Annabelle immediately withdrew the party whip but forced him to remain at Holyrood, as an independent until his resignation at the time of the 2007 Scottish elections.

In banishing Monteith she reopened wounds that had barely healed and set her on a collision course with a small core of Thatcherite s remaining in Scottish politics, including David Mundell.

Mar 2007: Only weeks before the Scottish General Election Mundell launched an attack on Party leader Goldie and her team at Holyrood

Murdo Fraser MSP had raised the possibility of a split from Westminster control so that the Party in Scotland would be able to decide upon policy.

Countering the Fraser challenge Mundell delivered a damning statement in a four-page memo to leader David Cameron (leaked to the press) revealing that Tory chiefs had lost confidence in the Holyrood team which was comprised of a “bunch of no-hopers” further claiming there was a “lack of thinkers” among the Tory MSPs who were utterly incapable of coming up with new policies.

He added: “There are more obvious problems than solutions emanating from Scotland from a party point of view. And I see little in the short term that can be done to improve the MSP group situation.”

And he was scathing about Tory MSPs’ abilities saying: “Whilst it is possible to agree in principle that the party in Scotland can make its own policy on devolved matters, the simple lack of strategic thinkers is apparent.”

Party members and some MSP’s demanded that his suspension and dismissal from office, or hanging from the Forth Road Bridge but Cameron refused to criticise him instead offering his support.

Cameron, Mundell, Osborne and others then conducted a war of attrition against Goldie and (in their view) her outdated Unionist views of the UK which, whilst maintaining the Union gave precedence to the interests of Scotland over the wishes of Westminster.

May 2007: Scottish General Election and Local Council Elections held on the same day

The Labour Government was in crisis fending off press and public critisism over the failed Iraq invasion and inceasing military and civilian casualties.

Afghanistan another military and political disaster and Westminster scandals, (cash for honours) requiring Tony Blair to be interviewed by the police, gave warning of a humiliating SNP victory in Scotland.

But Labour had a secret weapon who would turn things around in Scotland.

Douglas Alexander was promoted to the UK Cabinet as Secretary of State for Transport and Scotland.

The SNP lobbied Westminster seeking that the election process, in all respects be transferred to the authority of the Scottish Parliament.

This was refused and the duty was subsequently delegated to, “Wee Douglas” who would also run Labour’s electoral campaign in Scotland.

Elections to Holyrood, in 1999 and 2003 had, (preventing voter confusion) used two separate ballot papers for the constituency and regional lists.

Alexander and Scottish (Labour) government ministers decided that Local Council Elections would be held at the same time as the parliamentary election and both election selections would be printed on one ballot paper.

Civil servants and an independent marketing firm warned that the ballot forms would lead to confusion and a higher-than-average number of rejected votes.

Their advice was ignored, Alexander and the governing, (Labour) Party hit back claiming their changes would prove to be extremely popular. Civil servants and the, “Electoral Commission” were subsequently silenced.

In the election the SNP won by a single vote.  Alexander was hugely praised by Labour Party mandarins since he had almost, “saved the day” for Labour. The elections, were however badly tainted by a chaotic voting process,  blamed on the Scottish Office’s design of ballot papers.

In excess of 146,000 votes were declared void. The largest in electoral history.

Seventeen MSP’s were elected to Parliament with majorities lower than the number of spoiled ballots in their constituency.

There was a public outcry and, “Returning Officers” voiced their discontent about the election process.

Wee Alexander, “Scottish Secretary”, the accountable person that organized the elections, stated there would be a statutory review of the election under the auspices of the Labour Party loaded Electoral Commission.

The Scottish Electorate was outraged and demanded an independent inquiry. Tony Blair was forced to concede and an inquiry was commissioned.

Following an extensive, lengthy inquiry, an official report submitted by, Ron Gould, (a senior Canadian election official), heavily censured Alexander and the Labour Party stating that ministers in the Labour Scottish Government and at Westminster together with Mr Alexander’s political, “self-interested” moves, (as the Labour Party in Scotland’s election supremo), had abused their, “offices of state” making decisions about the election on “party political interest grounds”, with voters treated as an “after-thought.”

So be warned. Alexander and the Labour Party are akin to “snakes in the grass”. They care only for the Party. The voter is a means to an end. 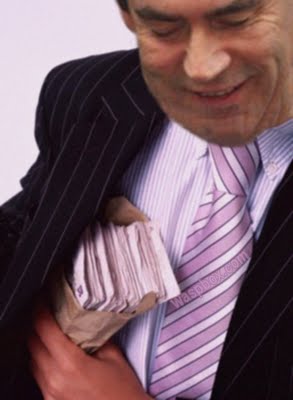 May 2007: SNP Gains Power in Scotland

In a dramatic and chaotic general election the SNP became the largest party in Scotland pipping Labour by one seat, putting the country on an uncertain course towards independence.

Nineteen hours after the polls had closed, and following see-sawing results, a disconsolate Labour conceded that the SNP had secured 47 seats to its 46 – a desperate setback for Gordon Brown in his backyard as he prepared to take over as prime minister.

Staking his claim to become first minister, Alex Salmond said; “It is very clear indeed which party has lost this election, and the Labour party no longer has any moral authority left to govern Scotland.

Scotland has changed for ever and for good. Never again will we say that the Labour party assumes it has a divine right to rule Scotland.”

The Scottish National Party (SNP) then proceeded to form a minority government which entailed governing via negotiation, garnering support from other parties on each single policy.

It was also possible for Parliament to approve opposition motions effectively blocking or frustrating nationalist ‘control’, with the second, third and fourth largest parties all being unionist, in a co-aligned majority on the constitution.

The major difficulty of cohabitation confronted both the SNP and Labour governments since the Westminster measures attaching to the devolved powers designed to ensure a permanent unionist majority in Holyrood preventing the SNP ever gaining control had failed.

A disgruntled Gordon Brown’s answer was to declare war on the SNP devolving Scottish business for discussion and or decision to civil service mandarins avoiding any contact with Alex Salmond setting the scene for the duration of the parliament making things even more difficult for the minority SNP government.

The “national conversation” initiated by the Scottish Executive in August 2007 has the potential to lead to radically more fundamental constitutional reform than any proposal contained in the Draft Westminster Constitutional Renewal Bill.

In which it was stated that “the Government believes that the executive should draw its powers from the people, through Parliament” but there is nothing in the Draft Bill to write such a principle into the constitutional law of the country.

If, as the Government claims, the country is to be a “representative democracy governed through a sovereign Parliament” then it follows that current constitutional practice with regard to the royal prerogative is contrary to principle.

The complete transfer of power from Crown to Parliament must be done.

The starting principle for executive power should be the same for central government as it already is for local government,  namely, that the government may exercise only those powers which are expressly or by necessary implication conferred upon it by statute.

If this is sufficient for local government why should it not also be for central government?

Thus, Government should possess only those powers which the people, through their elected representatives in Parliament, have expressly or by necessary implication conferred upon it by statute.

Well! well! Tomkins truly is a republican who believes in the supremacy of the people over politicans and royalty.

Westminster is not therefore the best advert for democracy since it functions solely to meet the needs of the Monarchy, Politicians, business and other lobbying entities over that of the citizens of the country.

It beggars belief therefore that he advances the view that the 1707, “Union of the Crowns” treaty should remain to be the force driving the politics of England and Scotland in the twenty first century and beyond.