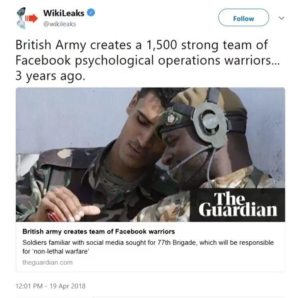 The Brigade, named the 77th in tribute to the Chindits, the British guerrilla force led by Maj Gen Orde Wingate* against the Japanese in Burma during the second world war, was formed in 2013/14.

It is headquartered near Newbury, in Berkshire and numbers around 1,500 personnel (including regulars and reservists) who are primarily recruited from military units across the army.

The force endeavours to influence the politics of other nations against a background of 24-hour news, smartphones and social media and has gained excellent working skills from expertise acquired by the the Israel Defense Force (IDF) which is presently active on 30 internet platforms, including Twitter, Facebook, YouTube and Instagram.

*Wingate organized and led the notorious Jewish murder squads against  native Palestinians in the fledgling state of Israel.  His methods were so brutal that Israeli politicians brought an end to it and demanded his banishment from Israel forever. 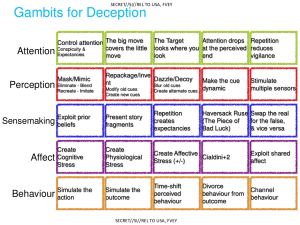 In 2005, the company, went public at the UK’s largest weapons conference, a showcase for military technology, with an impressive demonstration of how the UK government could use a sophisticated media campaign of mass deception fooling the British people into believing a bogus accident at a chemical plant had actually occurred and threatened central London.

A freedom of information request from August 2016, recorded that the MOD twice bought services from SCL in recent years.

The MOD refused to provide verifiable explanation of the use of the large sum of money.

It was further confirmed that SCL had also been granted “Top secret” clearance as a “list X” contractor for the MOD which allowed the company commercial access to and use of highly classified UK government information.

In 2014 a single political event (possibly manipulation of the outcome of the Scottish Independence Referendum) required an expenditure of £150,000 with SCL by the MOD for the “procurement of a “target audience analysis.”

Evidenced by the dubious activities of the Civil Service in England (see below), it is entirely possible the newly formed British Army Media and Psychops Elite Unit had made use of the comprehensive “target audience analysis” provided.

The late, Sir Jeremy Heywood, Sir Bob Kerslake and Sir Nicholas McPherson, the three amigo’s who ran the UK, collaborated and plotted against Scotland, marshalling the full might of the British State, attacking the Scottish government and supporters of the “Yes” campaign.

In the months after the referendum the Civil Service publicly expressed great satisfaction that their “Campaign of fear” had generated “fearties” in sufficient numbers so as to win the day for the Unionist coalition.

An award, in recognition of the civil servant’s outstanding achievement in making a difference on an issue of national significance, (the Referendum) was presented by the ”Cabinet Secretary and civil service head Sir Jeremy Heywood.

* Paul Doyle:  “This award is for all the hard work that was done by all British government departments on the Scotland independence agenda. In all my experience of the civil service, I have never seen the civil service pull together in the way they did supporting the Westminster government, maintaining the United Kingdom.”

* William MacFarlane, Deputy Director at HM Treasury, (Budget and Tax Strategy):  “As civil servants you don’t get involved in politics. But for the first time in my life, suddenly we’re part of a political campaign.

We were doing everything from the analysis, to the advertising, to the communications. I just felt a massive sense of being part of the operation. This being recognized [at the Civil Service Awards], makes me feel just incredibly proud.”

* Shannon Cochrane: “We’ve learned that it is possible for civil servants to work on things that are inherently political and quite difficult, and you’re very close to crossing the line of what is allowable, but it’s possible to find your way through and to make a difference.”

* Mario Pisani: Deputy Director HM Treasury, (Public Policy): “We all had something in common, we were fighting to save the Union, and it came so close. We just kept the UK intact by the skin of our teeth. I actually cried when the result came in. After 10 years in the civil service, my proudest moment is tonight and receiving this award.

As civil servants you don’t get involved in politics. For the first time in my life, suddenly we were part of a political campaign. We were doing everything from the analysis, to the advertising, to the communications. I just felt a massive sense of being part of the operation. This being recognized [at the Civil Service Awards], makes me feel just incredibly proud.” (civilserviceworld)

In a scandal that cut to the heart of British society board members included an array of Lords, Tory donors, ex-British army officers, defence contractors, the Tory Party and the military establishment.

Mark Turnbull: Provided the “Atlantic Alliance” link. Spent 18 years at Bell Pottinger, heading up a Pentagon funded PR drive in occupied Iraq which included the production of fake al-Qaeda videos. He was the head of SCL Elections and Cambridge Analytica Political Global.

His profile at the University of Exeter Strategy and Security Institute boasted of his record in achieving “campaign success via measurable behavioural change” in “over 100 campaigns in Europe, North and South America, Asia, Africa and the Caribbean”.

Nigel Oakes: An old Etonian, he was the head of the group.According to the website “PowerBase” had links to the British royal family. Rumoured to be an Mi5 spy.

In 1992 he described his work in a trade journal as using the same techniques as Aristotle and Hitler. … “We appeal to people on an emotional level to get them to agree on a functional level.”

Sir Geoffrey Pattie: Former Tory MP and Defense Minister in Thatcher’s government. He was the President of SCL. He also co-founded “Terrington Management” which listed BAE Systems and Lockheed Martin among its clients.

Roger Gabb: A former British special forces officer in Borneo and Kenya the wine millionaire was a company director. In 2006 he donated £500,000 to the Tory Party.

He was fined by the Electoral Commission for failing to include his name on an advert in a number of local newspapers arguing for a Leave.EU vote in the Brexit referendum.

Julian Wheatland: A venture capitalist, he was the company’s chairman. He was also the chairman of Oxfordshire Conservatives Association.

Jonathan Marland: The former Conservative Party Treasurer, was a trade envoy under David Cameron, and a close friend of Tory election strategist Lynton Crosby. He provided financial support to the company.

Vincent Tchenguiz: A property tycoon and Conservative party donor he was also the single largest SCL shareholder for a decade.

Gavin McNicoll: A company director. Founded counter-terrorism “Eden Intelligence” a firm who, at the behest of the British government, ran a G8 Plus conference on Financial Intelligence Cooperation.

Sir James Allen Mitchell: A retired board member, he was the former Prime Minister of the previous British colony St. Vincent and the Grenadines. He is also a privy counsellor on the Queen’s advisory board.

Rear Admiral John Tolhurst: A former assistant director of naval warfare in the Ministry of Defense and aide de camp to the Queen.

Lord Ivar Mountbatten: The Queen’s third cousin, was also named as a member of SCL’s advisory board.

It is evident that SCL was a product of murky alliances formed between venture capitalists, Tory Party politicians and their financial backers and former British military and intelligence officers.

The recent exposure of SCL provided irrefutable firm evidence of shadowy actors that used dirty tricks in order to rig elections. But these characters were not operating from Moscow intelligence bunkers.

Instead, they were British, Eton educated, headquartered in the city of London and had binding ties to Her Majesty’s government.

And the foregoing information barely scrapes the surface of just how deep the tie went between the UK defense establishment and SCL. (Paraphrasing author: Liam O Hare – Bella Caledonia)

The outcome of the 2014 “Scottish Independence Referendum” confirmed that the Tory government utilized every weapon in its formidable arsenal of civil servants and other bodies of state in its determined action against Scots who simply wished to be free of the brutal Westminster control which has bound Scotland to England in an illegal “Treaty of union” for over 300 years.  Alert to the trickery and deviousness of the British State, Scots should ensure counter measures are in place before the next referendum preventing a similar outcome.

Makes complete sense, however, how do we prevent. In 2014 I thought huge numbers voting yes would overwhelm dirty tricks, we did not get the numbers back then. However, they have many strings to their bow, they all need identified and widely exposed. We cannot use the same electoral commission either, given their bias in Indy1, we need our own, not Westminster’s and unbiased monitors in place. All backed up by large Yes numbers, it is coming for all that.

Agree. It was the voting arrangements that beat the Yes campaign. Just about all the reins of power rested with the Tory government in England. This needs to be addressed in good time before the next referendum

Yeah Westminster used every dirty trick in the book last time round. I’m hoping that at least 6% of Scots will have wakened up to the fact to get us successfully over the finish line. That plus exit polls and a Northern Irish style of postal voting.

Voting proceures need to be sorted otherwise Scots will be fiddled out of their voting as occured in 2014. Was there a postal fix in favour of “No? I think yes and am almost certain I know how they did it. But I am still digging around the results.

Is it not illegal what the UK government did? Surely it’s for Scots to decide without outside interference?

David Cameron said at the start of the referendum campaign that it was for Scots to decide their future and promised to stay out of the politicing. His position was declared when “Yes” wer polling around 22%.