The 1701 Alien Act was the culmination of the England’s efforts to subjucate Scotland, and the negative impact was huge.

An embargo on Scottish goods to both England and its colonies, enforced by a naval blockade of Scottish ports and a large English army force in Berwick, cut maritime trade by fifty percent, crippling Scotland’s already fragmented economy which was struggling to recover after twenty five percent of Scotland’s total liquid capital had been lost during the Darien Scheme.

Through this piece of legislation, English Parliament hinted at the dangers of refusing to unite the two nations.

On 2nd June 1713 the Earl introduced a Bill in the House of Lords to repeal the 1707 Treaty of Union citing amongst the grievances of the Scots:

1. The dissolution of the Scottish Privy Council.

But soon after the Union, the Union with Scotland (Amendment) Act 1707 combined the English and Scottish Privy Councils and decentralised Scottish administration through the appointment of justices of the peace in each Scottish shire to carry out administration.

In effect it took the day-to-day government of Scotland out of the hands of politicians and into those of the College of Justice who would report to the officer in post in the newly created position of Scottish Secretary of State in Westminster.

When the Scottish Parliament was established in 1998, treason and misprision of treason were designated as “reserved matters,” meaning they fell outside the jurisdiction of the Scottish government.

3. The incapacitating of the peers.

Article 22 of the Treaty had decreed that 16 peers and 45 commoners were to represent Scotland at Westminster, It would be for Scotland’s Parliament to settle the detail.

At this time the Edinburgh parliament was a unicameral body which, by the eve of the Union, had grown to consist of a ‘theoretical’ total of 302, made up of some 143 hereditary peers, 92 ‘shire’ or county commissioners, and 67 burgh commissioners.

Inevitably, Scotland’s loss of its representative body – symbolizing the loss of national sovereignty – in favour of a much reduced representation at Westminster produced deep resentment among the Scottish populace.

At the end of January 1707, following a series of ill-attended sittings, the Scottish Parliament passed legislation setting out the procedures for electing the 16 peers and 45 commoners. The 16 representative peers were to be chosen by the entire body of Scottish peers through ‘open election’ rather than by ballot.

Each elected peer was to serve for the duration of one Parliament. Upon the dissolution of Parliament all Scottish peers would be summoned by royal proclamation to the Palace of Holyroodhouse, where the names of peers were called over and each peer would then read out his list of 16 nominees.

It became standard practice for governments to canvass their preferred choices, thus ensuring a controllable bloc of support in the Upper House. The practice of electing “representative peers” of Scotland was to continue until it was abolished by the Peerage Act of 1963.

Scots legal experts were frustrated that from 1712 the House of Lords in Westminster was also the Court of Appeal for Scottish cases.

This led to “miscarriages of justice” caused by a lack of understanding of Scots law by English judges.

Scots landowners with English titles were angry in 1711 when they were prevented from taking their seats in the House of Lords. 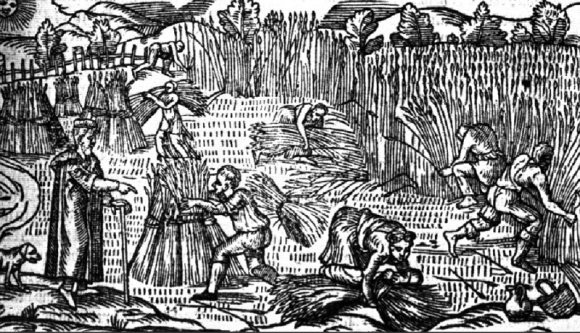 4. The introduction of many new taxes on Scotland

After 1707, new taxes imposed on Scotland by Westminster increased the prices of Scottish goods for export to England and abroad greatly benefitting English manufacturers but to the severe detriment of Scot’s.

The Salt Tax of 1711 was especially unpopular and resulted in riots.

The Malt Tax, introduced in 1713 in defiance of the Treaty of Union was imposed on the Scottish brewing industry and undermined a wide range of Scottish endeavours and entrenched a culture of evasion, amongst poor Scots who relied on a diet of inexpensive ale.

The cumulative effect of the new taxes served only to reduce legitimate trade in Scotland whilst encouraging smuggling and in some instances outright resistance.

As a result of increased goods duties, there were attacks on customs officers and an increase in the smuggling of goods into Scotland. 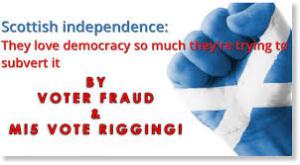 5. The deliberate ruination by Westminster of Scottish trade and manufacturing

Despite the promises made by England during the unification process, economic rehabilitation in Scotland was an abject failure.

The benefits of maritime trade afforded to them by the union only applied to the elite, (this is still the case in 2014) and the rest of Scotland faced a new, far less attractive economic reality after 1707.

The expansion of the cattle and sheep industries in Scotland to compensate for increased demand in England also led to many tenants being forcibly cleared off of their land in order to maximize grazing.

This accumulation of injustices only served to strengthen resistance to the Union of 1707 in both the Lowlands and the Highlands and, as their economic situation worsened many turned to Jacobitism as a solution to their problems, one that supported “the old monarchy” and was inherently Scottish.

6. Introduction of the English Enclosure Act

There was great unrest as a result of introduction of the English “enclosures” system of land allocation, replacing the Scottish “runrig” system.

There were outbreaks of fence-smashing by labourers who had fallen on hard times through not being able to afford “enclosures.”

7. The Irish Diamension – The Wool Act

Westninster prohibited any export of manufactured woollen goods from Ireland in 1699.

A protection of trade measure designed to ensure English farmers and woollen manufacturers would be allowed to operate without competition.

The restrictions on the woollen trade greatly distorted the importance of the Irish linen industry, particularly in Ulster and in 1696 a Bill was passed through Westminster which encouraged the manufacturing of linen in Ireland free of tax at time of export to England and other foreign trade.

But Scotland was not considered. Linen taxes were imposed on Scotland to the detriment of the trade and its rapid closure due to the high cost of exporting the yarn and finished goods. 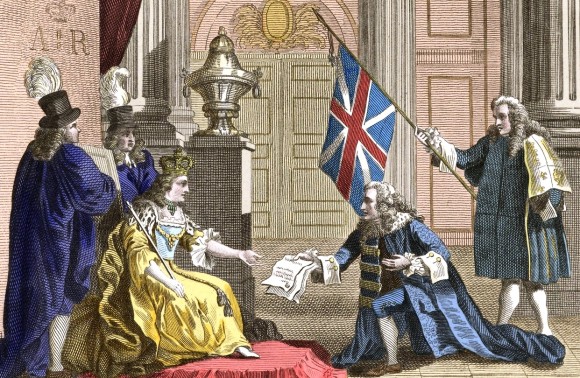 Outcome of the Debate

The response from the English peers who favoured the Union’s continuance principally underscored its importance in terms of protecting the succession.

At this point the coherence of the Scots’ assault broke down as some of their English allies moved in favour of adjourning the debate and suggested that separate legislation should be drafted for protecting the nation.

When the House came to divide, the bill for dissolving the Union lost by just 4 votes, and even then only because of the employment of proxies.

A few days later the malt bill passed the Lords and was enacted on 10th June.

The failure of the Scots’ rebellion was largely down to their inability to secure the unqualified support of key members of the Whig opposition.

For many of these the affair was simply an opportunity to embarrass the administration and when it came to the crunch were found to be absent from the House.

Even for those who believed genuinely that something needed to be done to improve the condition of the Scots, several preferred to concentrate on securing an amended version of the malt bill rather than threatening the Union itself.

Fantastic piece CJ. Thanks for all your efforts in putting this together. Shared and shared.

Thanks John; Your blog is inspiring, informative and provides much needed balance to the negative propganda of the Scottish media and the BBC ( which is no more Scottish than the so called impartial civil service). Cannot get my post onto Wings Over Scotland which is a shame since I alert around 600-1000 followers of my blog of my most recent post. CJ

Scottish debt was a years equivalent tax. On the day of Union it got a share of England’s War debt Overnight our debt increased by 2.5 million a ten fold increase

Reblogged this on sideshowtog.