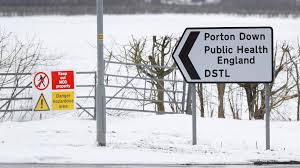 Today we published a 50-page dossier, detailing the history of Iraq’s weapons of mass destruction programme, its breach of United Nations resolutions, and its attempts to rebuild that illegal programme.

As the dossier sets out, we estimate on the basis of the UN’s work that there were up to 360 tonnes of bulk chemical warfare agents, including 1.5 tonnes of VX nerve agent; up to 3,000 tonnes of precursor chemicals; growth media sufficient to produce 26,000 litres of anthrax spores; and over 30,000 special munitions for delivery of chemical and biological agents.

All of this was missing and unaccounted for.

It is actually an 11-year history: a history of UN will flouted, of lies told by Saddam about the existence of his chemical, biological and nuclear weapons
programmes, and of obstruction, defiance and denial.

His weapons of mass destruction programme is active, detailed and growing.

The policy of containment is not working. The weapons of mass destruction programme is not shut down; it is up and running now.

I am aware, of course, that people will have to take elements of this on the good faith of our intelligence services, but this is what they are telling me, the British Prime Minister, and my senior colleagues.

The intelligence picture that they paint is one accumulated over the last four years. It is extensive, detailed and authoritative.

It concludes that Iraq has chemical and biological weapons, that Saddam has continued to produce them, that he has existing and active military plans for the use of chemical and biological weapons, which could be activated within 45 minutes, including against his own Shia population, and that he is actively trying to acquire nuclear weapons capability.

In particular, the UN inspection regime discovered that Iraq was trying to acquire mobile biological weapons facilities, which of course are easier to conceal.

Present intelligence confirms that it has now got such facilities.

The biological agents that we believe Iraq can produce include anthrax, botulinum, toxin, aflatoxin and ricin-all eventually result in excruciatingly painful death.

As for nuclear weapons, Saddam’s previous nuclear weapons programme was shut down by the inspectors, following disclosure by defectors of the full, but hidden, nature of it.

That programme was based on gas centrifuge uranium enrichment.

The known remaining stocks of uranium are now held under supervision by the International Atomic Energy Agency.

That is the assessment, given to me, of the Joint Intelligence Committee.

In addition, we have well founded intelligence to tell us that Saddam sees his WMD programme as vital to his survival and as a demonstration of his power and influence in the region.

Our case is simply this: not that we take military action come what may, but
that the case for ensuring Iraqi disarmament, as the UN itself has stipulated, is overwhelming.

I defy anyone, on the basis of this evidence, to say that that is an unreasonable demand for the international community to make when, after
all, it is only the same demand that we have made for 11 years and that Saddam has rejected.

If people say, “Why should Britain care?”, I answer, “Because there is no way this man, in this region above all regions, could begin a conflict using such weapons and the consequences not engulf the whole world, including this country.”