A Scottish Government plan to boost GP numbers has resulted in the recruitment of 18 doctors since it launched two years ago, according to figures highlighted by the Conservatives.

The party said the “handful” of new appointments from the GP Recruitment and Retention Programme will “barely have had any impact at all”.

Tory health spokesman Miles Briggs said: “It’s no wonder Scotland is in the grip of a general practice crisis when the SNP government fails so miserably to attract doctors to the job.

“This was launched with the promise of delivering GPs for rural and deprived areas. “Instead, it’s led to a handful of new appointments which will barely have had any impact at all.

“This is just another blatant failing of the SNP workforce planning, and the consequences on the ground are a population struggling to get a GP appointment, and those family doctors who are left feeling the strain.” (The Herald)

But is the picture any better in the Tory controlled English NHS?

NHS England published “GP Forward View” (GPFV) 18 months ago promising 5,000 more GPs in employment by 2020. So one year on, where do things stand?

Recently published figures by NHS Digital show that the full-time equivalent (FTE) GP workforce dropped by 445 in the three months to 31 December 2016, a fall that came on top of a decline of nearly 100 over the previous year.

The independent doctors and dentists review body (DDRB), which advises the government on doctors’ pay, warned in a report on Tuesday that it was ‘unclear’ how GP services could be maintained over the coming five to 10 years in the face of the growing workforce crisis.

GP leaders said the latest official workforce data were a ‘huge blow’ for general practice, which underscored how far the NHS was from hitting the government’s target of increasing the GP workforce by 5,000 by 2020/21. 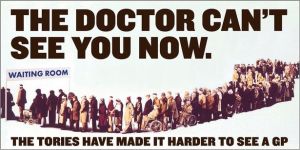 One thought on “Tory MSP Attacks Scottish Government’s Record On NHS General Practitioner (GP) Recruitment – His Wider Family Live In England How Are They Doing?”