Tuesday 18 October 2016: Aleppo Update – Do Not Believe the Hype -These are the facts

Terrorists of Al-Quaeda (recently renamed Al Nustra) in East-Aleppo are boxed in with nowhere to go. The Syrian army is steadily reducing terrorist held areas engaging in close combat, house to house fighting. Syrian and Russian air-forces deal swiftly with any overt attempts by the terrorists to gain advantage over ground troops. Al-Nustra fighters are reduced to less than 1000 and the civilian population is reported to be less than 20,000, (not the 1.5million headlined in the press.)

President Assad has halted military operations providing opportunity for civilians and fighters to leave the city and (under UN escort taken to a safe haven in Turkey.) 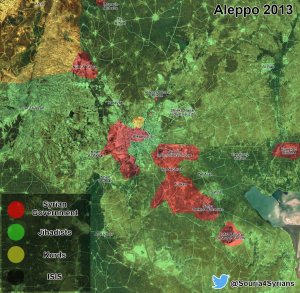 The Syrian army is advancing from the East using the main East-West road as the Axis. When complete Al-Nustra forces will be spit then rolled up within 2 weeks. 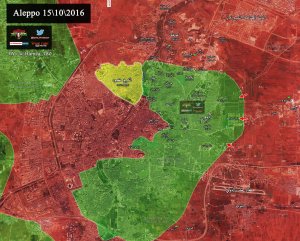