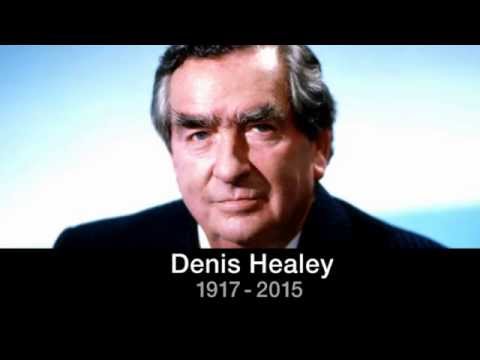 Denis was the best Prime Minister the UK never had. The aptly titled “Iron Chancellor” (1974 to 1979) rescued the UK from financial disaster on a scale mirroring the recent Greek fiasco. As with Greece and the EU, the International Monetary Fund (IMF) demanded the imposition of harsh measures on the workforce.

His high tax, low wage increase policies squeezed the rich and the poor alike but achieved results (in one year Healey repaid the IMF more of their loan than Osborne has paid back in 10 years).

But just as the economy took an upward swing the Unions decided they would no longer tolerate a wage squeeze on the lowest paid. Healey advised the Prime Minister Callaghan and the cabinet that the recession was at an end and whilst small increases could be entertained there needed to be a wage cap. Unions decided against the cap and instructed their members to strike.

There followed the “winter of discontent” which ushered in Margaret Thatcher and the Tory Party (1979). The Tories reaped the benefit of a growing (IMF loan free) economy and the added massive bonus of North Sea Oil and gas, the price of which would increase fourfold following the overthrow of the Shah of Iran and the Iran/Iraq war. More money in Westminster’s coffers than there had ever been. In Scotland there was euphoria. All was well with the world. But it wasn’t.

Thatcher embraced “monetarism” the financial philosophy of American economist, Milton Friedman. Based largely on restricting the money supply in circulation this was her weapon against rising prices, and it succeeded in halving inflation, to less than 5 per-cent by 1983.

But her success was brief since the UK’s Gross Domestic Product (GDP) failed to expand due to a massive programme of industrial downsizing instructed by Thatcher on Scotland and Wales, (punishment on Scotland for opposing the hated Poll Tax, support of the Coal-Miners and industrial action in the shipyards of the Clyde).

She went on to balance the failure of her monetary policies through the transfer of millions of workers to the care of the state, (the dole). Many aged over 40 would never work again.

Healey clashed frequently in Westminster with Thatcher, once accusing her of “adding the diplomacy of Alf Garnett to the economics of Arthur Daley.”

He also described her as “La Pasionaria of middle-class privilege” and declared: “I often compare Margaret Thatcher with Florence Nightingale. She stalks through the wards of our hospitals as a lady with a lamp. Unfortunately, it’s a blowlamp.”

Asked about “Scottish Independence” “fiscal independence” and the “currency union”  he said:

“I think we would suffer enormously if the income from Scottish oil stopped but if the Scots want it [independence] they should have it and we would just need to adjust. But I would think Scotland could survive perfectly well, economically, if it was independent. Yes, I would think so… with the oil.”

When questioned about the much repeated claims that Scotland is subsidised by the rest of the UK given that Joel Barnett, the architect of the Barnett formula, was his deputy at the Treasury and worked out what share of the national income pot Scotland should receive he said “pays its fair share” and that “these myths” are simply perpetuated by those that oppose independence.

On Scotland keeping the pound, he says Scotland would gain but adds that so “would the rest of us” and he doesn’t see why Westminster could say the Scots couldn’t have it.