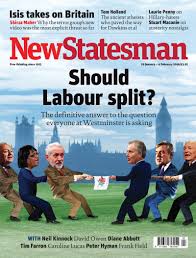 The “people” – if that’s what they are – quoted above are right wing blairites who, according to their prejudices, should be in the tory party. Corbyn is the only chance Labour(!) has of remaining a real political party, and we need a powerful left wing party in Britain, both in Scotland and in the rUK. The wee barky dug can’t provide such a party, so attacking Corbyn is really counter productive, even though he is of no actual help in achieving independence.

I expect there will be a blow out very soon Mandelson is gearing up to overthrow Corbyn. If the confrontation occurs before the Scottish elections it’ll be curtains for Dugdale and her tiny band of followers. The behaviour of Ian Murray is disgraceful. He s a member of “Progress” and as such is sworn to the organisations ideals yet he holds onto his position in the front bench. If he had an backbone he would resign his position. Ah! but this would present a problem for Corbyn. Who would he replace Murray with??

“Every single Labour MP was elected on a manifesto and a platform far away from that of the leadership.”

Every single Labour MP who lost their seat in 2015 also did it on the same manifesto and platform. Doesn’t say much for the manifesto or platform does it?

The manifesto they were elected on was slightly to the left of centre but Corbyn is taking the Party well to the left and they are uneasy. “Progress” led by Mandelson (he wont go away) are intent on taking the Party back to the right of Centre but to the left of the Tory Party. Ian Murray is a member of Progress and as such is without morals since he continues to occupy a seat on the front bench of his party. He should do the honourable thing and resign.

These has beens are behaving like spoil’t kids in a school playground, when are they going to realize the people want JC , they want change, not wishy washy unprincipled abstainers that endorse the Tory policies. You have had your chance and bungled two elections, it’s time you picked up your dummies and toys and started behaving like grown ups.