Scottish devolution is under way, spelling an end to centralist decision-making in the United Kingdom.

In accordance with the September 1997 referendum, Scotland is to have home rule.

Nearly three hundred years after the abolition of the last Scottish parliament, the country will again have its own elected legislative authority.

Within Europe, Scotland will have an identity as specific as, for instance, Catalonia or Bavaria.

But there is no knowing if this stage will be Scotland’s last. Scotland is rapidly moving out of England’s shadow to take its place as an autonomous nation in Europe. On 11 September 1997, nearly three centuries after the abolition of the last Scottish parliament, the country voted decisively to repatriate its politics to Edinburgh.

Although Scotland will remain within the United Kingdom, its new devolved political status may be a stage on the road to separate statehood within the European Union.

Almost two decades ago, in 1979, the last attempt to decentralize power in the British state was swept aside by the victory of the Conservatives, who under the leadership first of Margaret Thatcher and then of John Major, remained implacable opponents during their eighteen long years of rule.

The Scots are to have a fully-fledged parliament.

Consequently, Scotland’s parliament, for which elections are planned in 1999, will be a uniquely powerful new counter-weight to Westminster and a major symbolic focus for the national aspirations of the 5.1 million Scots.

Some observers believe that the extensive powers being given to Scotland will not easily be contained in future and may ultimately result in the break-up of the British state.

Since the Treaty of Union of 1707 (when Scotland’s last parliament was suspended), the country has retained its separate legal and educational systems and church, all of which, with differing importance over time, have contributed to the shaping of a distinct national culture and identity.

Since 1886, the national institutional matrix has also had a powerful territorial political and administrative dimension in the shape of the Scottish Office, based in Edinburgh.

This office is run by the Secretary of State for Scotland, who sits in the British Cabinet and is answerable to the House of Commons at Westminster.

The case for a Scottish parliament has been made in terms of the need to extend democratic control, in Scotland, over the Scottish Office.

Because the Scots have many of the appurtenances of a state, Scotland’s institutional distinctiveness has contributed powerfully to their dual identity: they are Scottish by nationality but British by citizenship.

The current evidence suggests that Scottishness is increasingly preferred to Britishness.

Because the Conservatives had lost all their Scottish seats in the May 1997 general election, there was now little serious opposition, in London or in Scotland, from those in favour of the centralist status quo.

Deciding on Scotland’s affairs in London, but administering them through Edinburgh, had become an untenable option.

The coalition for change was unstoppable: the referendum campaign in August and September 1997 brought together for the first time Scotland’s two main pro-devolution parties (Labour and the Liberal Democrats) with the pro-independence Scottish National Party (SNP).

The referendum implicitly identified the Scots as a civic nation, as voting was open only to residents of Scotland, irrespective of their ethnic backgrounds or places of birth.

Scots outside the country had no voting rights.

Opposition to the status quo

A telling majority of Scots voted for political autonomy.

On a turn-out of 60.4%, 74.3% supported the creation of a Scottish parliament, while 63.5% agreed that the proposed legislature should have tax-varying powers.

The 1997 vote was a milestone, as it reversed the result of the previous referendum of 1979.

Much of the groundwork for the devolution White Paper and the subsequent Scotland Bill, was published in December 1997 and now in the legislative process at Westminster, was prepared through the patient activities of the Scottish Constitutional Convention.

Little known outside Scotland, this body first convened in March 1989. It has been a crucial vehicle for key elements of Scottish civil society to devise a common approach to devolution.

Contributing to the Convention’s initial impetus was a resentment of the strident centralism of Margaret Thatcher.

This had led to the widespread sense that Scotland was not adequately represented by Westminster politics.

John Major’s government did not change this dominant view, although it modified some of the worst excesses of centralism.

The Convention brought together Scotland’s dominant Labour Party and the Liberal Democrats.

It also included other minor parties and representatives of a wide range of interests such as the trades unions, the women’s movement, local councils, and the churches.

Its political project was the restoration of home rule to Scotland within the framework of the United Kingdom.

Both the anti-devolution Conservatives and the independence-oriented SNP refused to join.

To legitimize its opposition to the constitutional status quo, the Convention invoked the will of the Scottish nation.

By seeing sovereignty as vested in “the people” rather than in the Crown-in-Parliament at Westminster, it drew a sharp distinction between Scottish and English constitutional thinking.

The Convention also pointed to decentralizing developments in the European Union to bolster its intellectual case.

Home rulers often invoke the German Länder and the Spanish autonomous regions and nations as examples to support British alignment with the European trend towards “subsidiarity”.

As an expression of civil society, the Convention could draw both on the legacy of the Scottish Enlightenment and find inspiration in civic movements intent on promoting political change and democratization in Eastern and Central Europe.

Important support came from agenda-setting elite newspapers such as The Herald (Glasgow) and The Scotsman (Edinburgh) which showed a consistent interest in the home rule movement, as did Scottish broadcasters.

Indeed, Scotland’s distinctive media – especially the press – are a key element of the country’s civil society.

The Convention managed to maintain a remarkably broad political consensus over a period of eight years.

Its detailed committee work and policy documents set the stage in 1997 for the White Paper, Scotland’s Parliament, and the subsequent historic Scotland Bill, whose provisions are very far-reaching.

Devolution means that Scotland will legislate in all major areas except those reserved to Westminster, principally, the constitution, UK financial matters, foreign policy, defence, social security and citizenship.

Powers exercised in Scotland will encompass key areas such as health, education, local government, economic development and transport, environment, agriculture, forestry and fishing, law and home affairs, sport and the arts, and permit a tax-varying power of up to 3% of basic income tax.

The first general election will be in 1999. There will be 129 Members of the Scottish Parliament (MSPs), of which 73 will be elected by the first-past-the-post system in existing Westminster constituencies.

An additional member voting system will elect the other 56 members from party lists (seven from each of the eight European parliamentary constituencies).

As the Scotland Bill heads towards enactment at Westminster this summer, a new political culture has been rapidly developing north of the Anglo-Scottish border.

The future practice of the Edinburgh legislature, to be sited at Holyrood, is being defined against the Westminster model.

New departures include a substantial shift towards proportional representation in parliamentary elections, the apparent determination of the major parties to ensure a gender balance at Holyrood, and the desire to employ a consensual rather than adversarial style in parliamentary committees.

These could all contribute to giving Scottish political culture a quite distinctive style and flavour.

There is also an evident desire to escape the incestuous Westminster lobby system of political reporting.

Ministers are discussing the practicalities of greater openness in media relations with the new Scottish Parliamentary Press Association.

The Scottish Office is presently considering how cable and digital technology might be used to increase public access to the parliament and how pressure groups and the general public might be encouraged to make use of the planned new legislature building.

A special committee, including non-party constitutional advisers, is currently drawing up rules of conduct for the parliament, aimed at offering a style quite distinct from Westminster’s traditionalism and stuffy formality.

From 1999, Holyrood will be home to a four-party parliamentary dynamic.

The Liberal Democrats are possible coalition partners, and the Scottish National Party likely to be the main opposition.

Next year’s election offers the first major chance of rehabilitation for the Scottish Conservatives, who have made it clear that they will use the new arena to relaunch themselves.

Each party will vie to devise the most authentically popular Scottish policies and, as distinctive national concerns begin to predominate, there may well be new political alignments quite distinct from those at Westminster.

The new importance of Edinburgh as a political capital has begun to generate a political market-place, with political and public affairs companies keen to exploit the new opportunities.

Moves are afoot to set up an association of professional Scottish parliamentary lobbyists.

Several new think-tanks have sprung up, intent on influencing the policy process.

Newspapers based in Glasgow, Scotland’s media capital, are setting up major news operations in Edinburgh.

Of the London media, Channel 4 Television has adapted to devolution by establishing a new office in Glasgow.

The telecommunications giant, British Telecom, has declared its interest in the restoration of trust in the political process, underlining the role of information technology in promoting public electoral involvement and proposing remote electronic access to the parliament’s work for its Members.

Currently, research is being undertaken by the official body, Scotland the Brand, into “Scottishness” and its exploitability in advertising and the packaging of Scottish goods.

The country’s new official marketing device, unveiled in November 1997, is the word “Scotland”, in signature style, in which the Saltire blue of the national flag blends into tartan.

The logo is to be used across the range of products and services – food, drink, textiles, financial and medical services, engineering, the universities.

By December 1997 it had already been adopted by 150 companies, including major household names.

It seems that consumer nationalism of a kind will now be inescapable, even if it is not necessarily politically separatist.

Scottish Devolution is certainly sounding the death-knell of centralist decision-making in the United Kingdom.

Consequently, the British state is now likely to experience the strains of “asymmetrical government”.

There have already been illustrative opening skirmishes between Edinburgh and London about control over inward investment, over higher education fees for students, and most importantly over the proportion of UK funds to be allocated to Scotland in future.

The British political class – whether it is located in London or in Edinburgh – will rapidly have to learn the new political art of making devolution work.

Otherwise the new Scottish democracy may, by degrees, push towards independent statehood within the European Union. 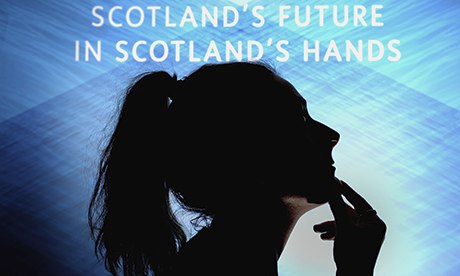