Educated in Cumbria and at Cambridge University where she obtained an MA in economics, she also received an MA in European Economics from the College of Europe in Bruges.

Having joined the civil service as an economist in 1993, her first posting was in the Employment Department in Sheffield. After brief stints in London and Brussels, in 1997 she moved to Edinburgh as a government economist with the then Scottish Office.

Between 2007 and 2009, she was Principal Private Secretary to the First Minister before being appointed, in December 2009, as Director for Culture, External Affairs, and Tourism.

She was awarded an OBE ( Other Buggers Efforts) in the Queen’s New Year’s Honours in January 2015 for services to Government and to the Commonwealth Games.

She was further rewarded with a promotion to the post of Director for the Scotland Office in the UK Government in January 2015.

Her new boss David (mundane) Mundell was delighted since she would be the catalyst ensuring successful implementation of the Westminster government’s plans to usurp the will of the Scottish people through an invidious extensive programme of change transferring financial and political responsibility away from Holyrood. Direct rule by the back door. HiHo!  Mundell.

She also maintains links to the secretive  “Common Purpose” networking organization created by its chief executive, Julia Middleton (I wrote a blog about this lot). This was the organisation that formed the “33Fifty” group of young leaders of the future who participated in the conduct of the games in partnership with the Royal Commonwealth Society. Mr Chope:  We are talking today about the work of the Scottish Office, not just looking at what was happening previously and in particular the  Westminster government’s plans to allocate £8 million for 2015-16, as against the actual out-turn for last year, (which included the Independence referendum) of £7.7 million. Is there an explanation for this?

Osowska: Again, thank you for the question, because I think it does bear explanation. No, we don’t have a referendum in 2015-16, but what we do have is the continuing work of the Scotland Office to deliver on some of the events after the referendum.

You will be aware that the Smith Commission report was delivered in November 2014. There was an agreement that a draft Bill would be brought forward as soon as possible. That draft Bill was introduced into Westminster the day after the Queen’s Speech, and that legislative process, which commenced effectively on 19 September 2014, has had a great bearing on the work of the Scotland Office.

We have put resources into that to deliver in a very compressed timescale from concept to delivery of a Bill, so the resources for 2015-16 support that work; it is a key priority of the Scotland Office to deliver that Bill.

In addition, earlier in the year, the UK Treasury did have a review of the Scotland Office provision and agreed that the original trajectory of the budget provision set for the office in 2010 needed to be adjusted for this fact.

Finally, in terms of the Scotland Bill specifically, as well as the staff resources that are needed to deliver it, which I have mentioned, in addition, there are some costs in relation to the drafting of the Bill that add into our costs.

That is the explanation. It is also worth saying that obviously, these are plans. As you will know, there is a spending review process going on at the moment. The Treasury has yet to announce departmental provision and so we don’t know whether that will be fulfilled.

Margaret Ferrier: The Annual Report and Accounts show that the grant payable to Scotland was increased by a very small increment 2014/15 over 2013/14. Excluding the impact of devolution, is the next spending review settlement likely to mean any cuts for Scotland?

Margaret Ferrier: The Scotland Office is going to play no part, then, in the spending review process?

Mr Chope: This is about the cash reserves. Who administers the Scottish cash reserves that are created to mitigate potential volatility in tax receipts?

Osowska: Is this the mechanism by which funds are paid to the Scottish Government?

Osowska: Yes, the Scotland Office administers that, and that is a consequence of the 1998 Scotland Act.

Mr Chope: Do you think the Scottish Government should have more discretion over when to draw upon that Scottish cash reserve to go alongside its power to make discretionary payments into the cash reserve?

Osowska: It would not be appropriate for me to comment on whether the Scottish Government should have a more discretionary role in the procedure. However, what I can say is that, as a process, this has been in place since devolution.

All payments relating to both the block grant and changes to the grant are made to the Scottish Consolidated Fund and administered through the Scotland Office. As I said, that is a consequence of the 1998 Act.

Each month, the Scottish Government calculates the amount required to fund its various bodies covered by the grant, and the Scotland Office requests the funding from the Treasury and it is transferred to the Scottish Consolidated Fund.

Treasury is responsible for a cash management programme, which means that funding cannot be drawn down in advance of need, and I think that the system has worked very well up to now.

Mr Chope: Do you think it is easily understood by the people in the United Kingdom, collectively?

Osowska: Again, I am not sure I could comment on that. I understand it, but then perhaps I am slightly more steeped in it than the average person on the street. I think the point is that it works and it works well, and if the average person on the street, if there is such a thing, does not understand that, does it matter? The Scottish Government receives the funding that it needs on time. 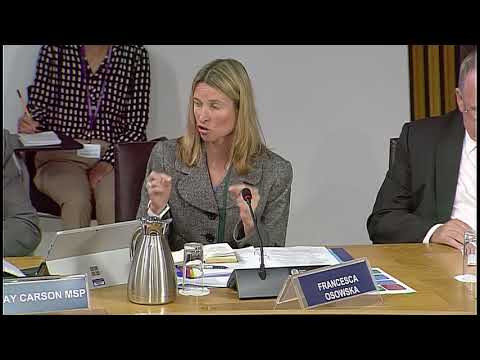 Pete Wishart: Just on this issue, there is always a fight and a fuss about perceived underspends; we have had that in the Scottish Parliament in the course of the past few weeks.

Are there any plans or provisions where this money could be carried forward if there is an underspend that has been identified within the Scottish Government budget?

It is 0.6% that needs to be taken forward. Is there any flexibility in that that would allow the Scottish Government to spend much more if there is an underspend at the end of a parliamentary session? 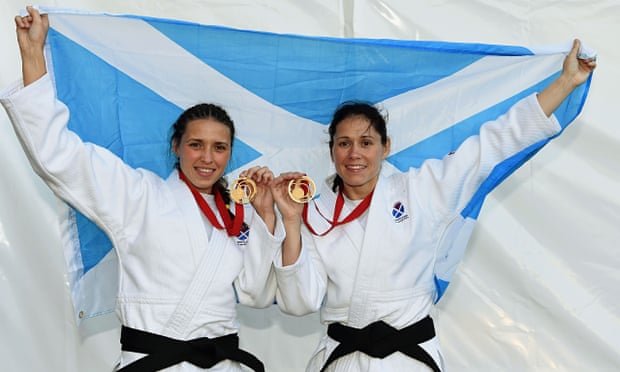 Chris Law: I want to ask some questions surrounding the future of income tax collection in Scotland, which is due to start next year. I want to know: is HMRC ready for its implementation and has it identified Scottish taxpayers and all of them?

Osowska: My view on that and you will appreciate that I don’t want to speak overly for HMRC would be yes. We know that HMRC will be writing to those that they have identified as Scottish taxpayers, based on postcode data.

There is very good working between HMRC, the Scottish Government and Revenue Scotland. We have seen already this year the devolution of two taxes as a consequence of the 2012 Act (stamp duty land tax and landfill tax) and I think close working between the Governments allowed that to be delivered.

Indeed, on the day that the new taxes commenced, the chair of Revenue Scotland, Dr. Keith Nicholson, wrote to Edward Troup, who is the Tax Assurance Commissioner for HMRC, and said, “on what is a historic occasion for Scotland, I wanted to take the time to pass on my gratitude to you and the staff of HMRC for the incredible effort and collaborative working that has been instrumental in seeing a smooth transition from the UK taxes to the devolved taxes today”.

Osowska: I can point to two strands of activity. One of the roles of the Scotland Office, as I mentioned earlier, is obviously to lead some of the engagement on behalf of the UK Government overall in Scotland.

As an organization, we do engage regularly with the business community and we are able to by this means—through seminars, through emails, through our ongoing contacts provide this information to them. I also know that HMRC is undertaking their own stakeholder engagement and business community engagement to ensure that businesses are prepared for the change.

Chris Law: Let us suppose HMRC costs increase, for example, diverging tax rates increasing through customer contact or possibly prompting people to attempt to gain the system. Which Government is going to be liable for these additional costs?

Osowska: I would need to have a discussion with HMRC and get back to you on that.

Chris Law: What preparatory work have you done for the new devolution of income tax? Is there anything that you have in place already, or have you just learned from the experience of the small devolution of the tax powers just now? What are you doing to ensure that we are going to be in a position to pick up the new income tax powers in the next few years?

Osowska: As I have set out, I think we did learn a lot, and Revenue Scotland and HMRC learned a lot, from the devolution of the previous taxes. Work continues on that basis and the Scotland Office has continued dialogue with HMRC, who are leading on this issue for the UK Government.

We have a dialogue and asked for assurance on this work and that assurance is given. Again, if the Committee requires further information on that, we can provide it.

Osowska: Again, I don’t want to appear evasive, but you will be aware that there are discussions being conducted between the Scottish Government and the Treasury at the moment in terms of the fiscal framework.

Those discussions are ongoing and I cannot comment any further. We know, for example, from the devolution of stamp duty land tax and landfill tax, that block grant adjustment mechanisms can be agreed and are used, and the same will be true for the Scottish rate of income tax.

Pete Wishart: How many of your staff are going to be allocated to working on the fiscal framework? What type of resource is the Scotland Office going to be putting into this whole major piece of work that we are going to have to undertake in order to ensure this is going to be done properly?

Osowska: I think it might be helpful, in terms of understanding responsibilities, to say that the Scotland Office is responsible for the overall passage of the Scotland Bill that is now going through Parliament.

Treasury leads on that piece of work. The Scotland Office’s role is to make sure that we connect the fiscal framework conversation, discussions and agreements with the legislative process. 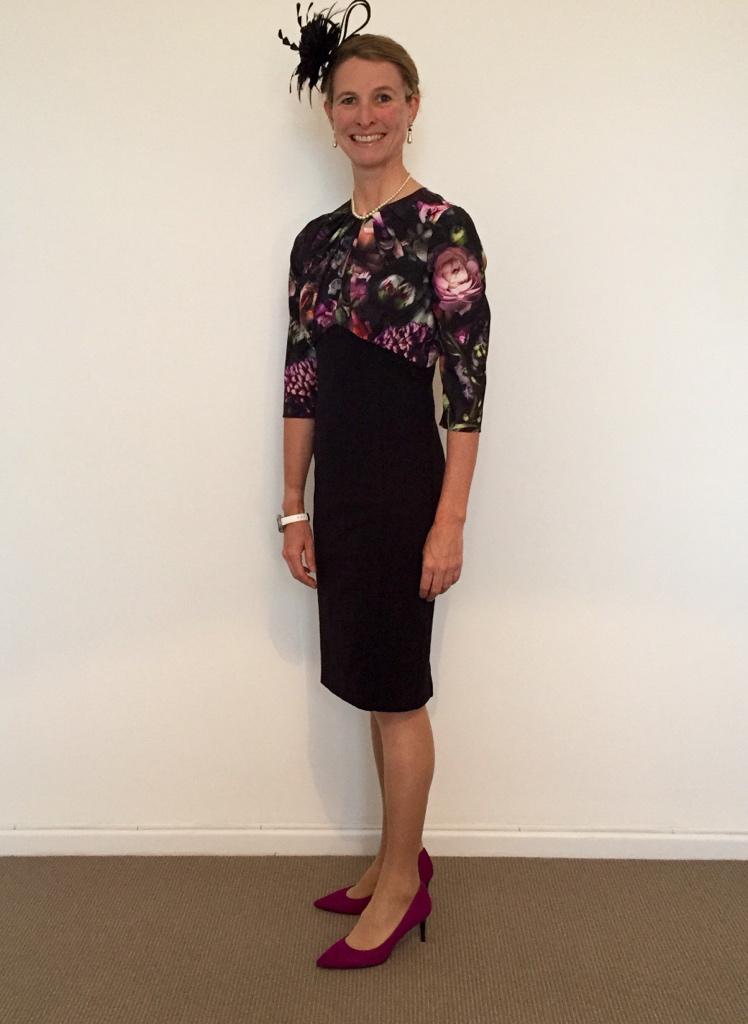