A commons select committee was formed early in the year 2002 with a remit to review inter-government working arrangements insofar as they were applicable to devolution and to bring forward recommendations, if any, for change which would further enhance devolution legislation.

Within the UK Government, responsibility for intergovernmental relations is widely dispersed. Few parts of the UK Government are untouched by devolution. In a department such as the Department for the Environment, Food and Rural Affairs (DEFRA) almost every part of the organisation has to interact with its counterparts in the devolved administrations with some degree of frequency. What follows addresses how the UK Government is organised at the centre to deal with intergovernmental relations as they affect Scotland.

David Mundell and his son (Future Secretary of State for Scotland) Nepotism !!

The Secretary of State For the UK Government in Scotland

The Scotland Office, in it’s present form, was established in 1999 to deal with UK Government functions which related to Scotland. The Secretary of State for Scotland is supported by a Parliamentary Under-Secretary. 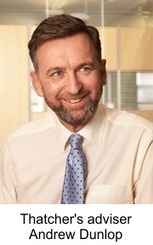 Under-Secretary of State for the UK Government in Scotland

The Secretary of State’s “two headed dog” role has been defended by UK interested parties who offer that:

“It is a false dichotomy to say that the Secretary of State is either Scotland’s man in government or the government’s man in Scotland. He tries to be both. To be the voice of Scotland within the Cabinet and also to promote the Government’s policies in Scotland”

This particular interpretation of the Secretary of State’s role implies that the minister assumes a broad political role in relation to the devolved area concerned. It involves membership of upwards of 20 Cabinet Committees.

Such a role need not be limited to devolution; it follows that the Secretary of State will be involved in discussions on any matter concerning that area whether the matter is devolved or not. Indeed, one would expect them to be more active where the matter remains a UK responsibility (for example in relation to defence) than where the matter has passed to the devolved bodies. This role relates to the devolved area, and not to devolution as such; it is very much the same role as that always played by the relevant Secretaries of State.

Beyond this, we are sceptical about the value of the political role of the Secretary of State for Scotland. The Secretary of State is not accountable to Parliament for what the devolved administration does. He or she has no financial responsibility for how the devolved administration spends its funds. While the role may have been valuable for a transitional period, while the devolved institutions were established and immediately afterward, we have to question what its value is once devolution has become a settled part of the constitution.

This Janus-faced role of political presentation and liaison is not in itself the consequence of devolution. It complements a further role arising as a result of devolution, that of resolving issues concerning both the UK Government and the devolved administration. The Secretary of State for Scotland has lost almost all responsibility for government programmes; elections being the principal exception.

In other areas, the Secretary of State has no direct involvement in policy-making. Rather, the relationship is directly between the devolved administration or administrations involved and the relevant UK Department.

The Secretary of State and his or her Office only become involved when matters cannot be resolved at that level or become complicated or difficult, as their expertise is in the particular devolution settlements, not the policy issues involved.

The Secretary of State is therefore at one removed from the making of policy, kept abreast of what is going on but only involved when an issue cannot be resolved directly between the devolved administration and the relevant UK Department. For the Secretary of State this means that a great deal of his/her work is done behind the scenes. Consequently, the nature of the roles of Secretary of State has changed considerably with devolution.

Both these roles rely in large part on the Secretary of State being a member, not just of the majority party at Westminster but also the dominant party in office in the devolved administrations. The assumption is that parties share “a common agenda, a common understanding as to the values and problems they were trying to address. That obviously raises the question of how these functions would work if different parties are in office.

Sewel motions derive their name from the statement made in the House of Lords by the Scottish Office Minister, Lord Sewel, during the Second Reading of the Scotland Bill. He outlined the principles governing the introduction of legislation at Westminster affecting devolved matters. These principles are now set out in a “Memorandum of Understanding.” Paragraph 13 of this provides:

“The United Kingdom Parliament retains authority to legislate on any issue, whether devolved or not. It is ultimately for Parliament to decide what use to make of that power. However, the UK Government will proceed in accordance with the convention that the UK Parliament would not normally legislate with regard to devolved matters except with the agreement of the devolved legislature. The devolved administrations will be responsible for seeking such agreement as may be required for this purpose on an approach from the UK Government.” Sewel motions are the means through which such agreement is expressed.

On a more practical level, the Secretary of State has a key role in any negotiations about financial matters, such as the overall amount of the block grants as determined by Spending Reviews, and any amounts additional to that. While the Secretary of State does not act as a proxy for the devolved administration, his/her office relys heavily on support from officials working for the devolved administrations regarding technical matters.

The foregoing roles are important in making devolution work. The issue is not whether they should exist, but whether there is a need that they should continue to be played by a Secretary of State or some other more suitable arrangement.

One important exception is the arrangements within the Scotland Office for legal matters. Scots law is different in many respects from the laws applying elewhere in the UK. This creates two legal offices: the Advocate-General for Scotland, the UK Government’s Scottish law officer, and the Office of the Solicitor to the Advocate-General, (OSAG) which houses the UK Government’s general legal advisers on matters of Scots law. OSAG also deals with Scots law issues arising from Westminster legislation and has a role in the scrutiny of legislation before the Scottish Parliament.

There is a glaring disparity in size of the Scotland and Wales Offices. In many ways the roles they play are similar. There are two major differences that do exist:

(1). The Scotland Office incorporates the Office of the Solicitor to the Advocate-General (OSAG), which has no parallel for Wales.

(2). Since Westminster remains the sole legislature for Wales it is expected the staffing of the two offices would be similar.

This is not the case however. Reports indicate that the Scotland Office has retained 85 staff, (excluding OSAG and the Legal Secretariat to the Advocate-General) despite many functions being transferred to the Scottish Parliament. This has the effect of increasing the cost of running the Holyrood parliament whilst retaining an unsustainable ring fenced establishment at the Scottish Office.

The Wales Office an average of 41 (excluding its legal adviser). The Scotland Office therefore has more than twice as many officials as the Wales Office, even though the devolution settlement for Scotland is rather more straightforward from a UK Government point of view than the Wales one. There is an on-going lack of a cogent explanation for the discrepancy and how this anomally has been allowed to be retained.

In recognition of a transfer of many powers of state to devolved governments it is recommended that the UK Government should merge all UK Devolution teams under the direction of one Cabinet Minister. This single single group of officials would be well able to deal with the full range of much reduced intergovernmental issues.

You just have to look at the ‘Scotland Office’ website to see that it is a self congratulatory faction for the benefit of the UKok government as well as jobs, well paid ones, for the boys, mostly no doubt english ones.

What a disgraceful waste of tax payers money, with food banks, homelessness and great poverty it is an insult. The london elite keeping hold of Scotland very tightly, choking the country while asset stripping her. Immoral, unethical and undemocratic. Sickening.

So true. There is a lot going on. The unelected grace and favour lord Andrew Dunlop is the brain behind just about all that is being foisted upon Scotland. He has been at the heart of Tory politics for nearly 40 year’s. He and Cameron were SpAds in Thatcher’s government. Cameron’s policies in regard to Scotland are one and the same with Dunlop’s. A nasty piece of work.

Reblogged this on charlesobrien08 and commented:
None the wiser,no not me Mundell,he’s none the wiser!

Mundell, Cameron and Dunlop are plotting