James Kelly grew up in Rutherglen and stays in Cambuslang with his wife Alexa and their two daughters.

He is a Scottish Labour Co-operative politician and Member of the Scottish Parliament for the Rutherglen constituency from 2007.

He is the current Scottish Labour Party Business Manager in the Scottish Parliament and the party’s election co-ordinator for the 2016 Scottish Elections.

He has mastered the art of appearing at just about every positive photo opportunity and sound bite interview, keeping his profile high in the public eye, whilst always ensuring he has available enough  “non-stick teflon” to spread around enabling protection of his political persona in a cloak of invisibility.

He is a very poor public speaker possessing a delivery akin to Mr Sleepy. 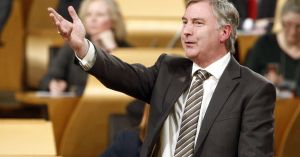 Whilst recognising that decisions on matters of defence are the responsibility of the UK Government.

This Parliament nevertheless calls upon the UK government to reject the proposed replacement of Trident.

71 MSPs voted for the motion.

3 MSPs did not register a vote.

Labour’s James Kelly is a member of the the Holyrood committee investigating the Scottish Government’s handling of Abdelbaset Ali Mohmed Al Megrahi’s release from jail.

In that capacity he questioned  Scottish Justice Secretary Kenny MacAskill on a number of issues.

Kelly told the convener he had no declarations of interest at the time he joined the Scottish Parliament’s Justice Committee.

But this was untrue. His brother Tony Kelly is defence lawyer for the Lockerbie bomber!!!

Kelly insisted criticism of him was “frankly ludicrous” and that his family relationship was “well known”.

“In the interests of transparency I am surprised that Mr Kelly did not see fit to declare his personal relationship to Mr Megrahi’s lawyer. In a case which has caused such controversy  any cloud over the hearing is deeply unfortunate.” (The Herald)

23 August 2009 – Kelly’s rambling speech of little substance in the debate about job losses at Vion Foods.

23 August 2009 – Kelly’s speech in the Scottish Parliament debate on a UK general election.

16 June 2012 – Kelly waffling about the Olympic flame passing through Rutherglen.

Kelly to the rescue of his leader without mention that it was Labour’s Strathclyde Partnership for Transport (SPT)  who forked out £840,000 of taxpayers money for a lump of land worth £50,000. And who was head of (SPT) at the time?  OH!!!! it was Johann Lamont’s Husband.

10 October 2014 – Johann Lamont tries to make political capital out of a rail contract, awarded to a Dutch firm. Alex Salmond explains, but it all goes over Johann’s wee head. Seeking to add hilarity to the proceedings and oblivious to all that had gone before Kelly rides to the rescue of his leader offering confused and contradictory arguments in his inimitable lugubrious style.

24 March 2015 – Asked repeatedly Kelly fails to answer the question. Would  Labour allow the Tory Party to rule as a minority government?