Oh Dear What Can The Matter Be??

In a previous article I advised that all was not well within the Scottish Branch of the Tory Party. The problem for Ruth Davidson is that she has wrapped the party in Scotland around her own personality, which is a strategy doomed to failure should the positive public perception of her show a reverse. There are divisions within the party partially attributed to her forced clear-out of, “deadwood” in favour of young SPADS with little or no political nor work experience outside politics. There is every chance she will be allowed to continue in office until after the 2016 election. But there might well be a bloodbath thereafter. It is noteworthy that her Chief of staff, Lindsay McCallum resigned last month resultant of a number of major policy and personality disagreements. See previous post’s:

Long-serving Conservative MSPs will be forced to stand down from the Scottish Parliament at the next election if they fail to win a constituency seat, under a radical plan by a leadership candidate to introduce fresh blood into the party. They would only be able to serve three or four consecutive terms as list MSPs, who are elected using a complicated system of proportional representation to represent one of eight regions of Scotland. Significantly, Mr Jackson said he would apply the change retrospectively, meaning a series of the party’s most high-profile figures would have to win a constituency at the next election or step aside if a three-term limit was imposed.

They include Murdo Fraser, the bookies’ favourite in the contest to succeed Annabel Goldie as Tory leader, who is serving his third full term as a Mid Scotland and Fife regional MSP. Mr Fraser has not come close to unseating John Swinney in his Perthshire North seat, with the SNP Finance Minister increasing his majority in May to more than 10,000. Among the other long-serving Conservative MSPs who would be forced out are Alex Johnstone, Sir Jamie McGrigor and, should they not decide to retire, Nanette Milne and Miss Goldie herself.

The changes will apply in the 2016 election and be retrospective. Only three MSPs in the Conservative group at Holyrood have constituencies of their own, with the remainder relying on the regional list for their seats. Some have used the system to win re-election since devolution started in 1999. 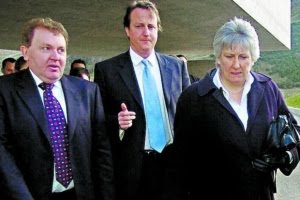 The Scottish Conservatives have launched a new party logo, which aims to reflect both the flag of Scotland and that of the United Kingdom. Scottish Tory leader Ruth Davidson said: “Our new Union Saltire logo is bold, fresh and easy to recognise.” She said it was “distinctly Scottish but with colours which clearly reflect our pride in the United Kingdom”.

Reacting to the change, SNP MSP Kenneth Gibson said: “There’s something strangely appropriate in the Tories choosing a ‘double-cross’ to represent whatever it is they stand for, but I’m not sure it’s the message they were aiming for. “The remnants of the Tories in Scotland might understandably want to distance themselves from their colleagues in Westminster, but the truth is a leopard can’t change its spots.” http://www.bbc.co.uk/news/uk-scotland-20475998 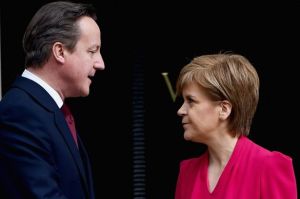 The steady progression of Scottish Conservative MSPs announcing that they have decided to stand down at the coming Scottish Elections in May 2016 continues to escalate. Those standing down are nationally known names, who have carried senior roles in opposition at Holyrood and in public life. They are – in order of announcement to date:

Baroness Goldie – who led the party between 2005 to 2011, said “I will focus my efforts on the House of Lords” following her elevation to the peerage two years ago.

Nanette Milne – North East MSP and Public Health Spokeswoman said “As an MSP over the last 12 years, I am most proud of my behind-the-scenes work which I have undertaken as an MSP on behalf of my constituents.”

Alex Fergusson – Galloway and West Dumfries MSP and former Presiding Officer [the third] for four years from 2007-2011 who has served in the Scottish Parliament since its creation in 1999 said “Someone once said that a week is a long time in politics, but I have to say that the last 17 years have simply flown by.”

Mary Scanlon – Highlands and Islands MSP and Education and Lifelong Learning Spokeswoman and Deputy Convener of the Public Audit Committee said “I am proud of my working class background.” An MSP since 1999, she has previously held shadow posts for her party in Health and in Energy, Enterprise and Tourism.

Cameron Buchanan – Edinburgh and Lothians MSP and Local Government Spokesman “There’s a lot of new blood in the party and a new talent waiting in the wings, so it’s time to give others a chance. I’m also looking forward to spending more time with my family – if they’ll have me.” Buchanan has been an MSP only since 2013, standing for his party to fill the gap left by the sudden death of former Scottish Conservative Leader, David McLetchie. 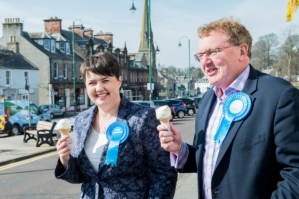 Many Tory party members are inclined to the view that if the Scottish Conservatives fail to improve their share of the vote in the 2016 Scottish elections, Ruth Davidson should remain as leader. She has injected much needed steel, into the backbone of a party, content to exist but not to thrive. Whilst resigning on her own terms or in electoral disgrace would be a devastating blow to the Scottish Conservatives. It would not be a fatal blow. The party has mastered hanging on when the electorate and even some of its own members and representatives keep trying to give it the final nudge.

The Scottish Tories are not alone. All polls are predicting a bloodletting from Scottish Labour to the SNP. That the ‘natural party of government’ in Scotland for the last fifty years represents a stark foreboding for the Scottish Conservatives.

Davidson has had longer to establish herself in the public consciousness, even completing a major policy u-turn grasping the English political zeitgeist with her zealous and sincere performance during the referendum.

It might well be political suicide for the Scottish Conservatives to get rid of Davidson. But, whilst she brought an energising zeal to bear on a party that desperately needed it, the party has not responded in step. Their logo has changed (the quickly jumped upon “double cross”) but there is little to suggest that there is a new intellectual reformation has taken grip to support the imagination that Davidson exudes. The party as a whole is still Thatcher-lite: there is little dissent and very few policy forums.

This begs the question as to who is carrying who. Are the Scottish Conservatives semi or totally autonomous from the Conservative Party down south? Are they one entity when it suits them and miles apart when they differ? Do the Scottish Conservatives wait to be told what to think by London, or is the Party in Scotland not giving Davidson the ideas and infrastructure support? Whatever the arrangement’s are Davidson evidently does not have the freedom to do as she pleases.

There’s a peculiarly Scottish dimension to her “Blue collar Conservatism” that makes her liked across the political spectrum, both north and south of the border and Cameron is giving out signals he is prepared to set aside his much vaunted One-Nation credentials in favour of welfare reform. But that sounds better on paper than in the reality. One wonders if the Scottish Conservatives had total autonomy with no accountability to London how they would position themselves. 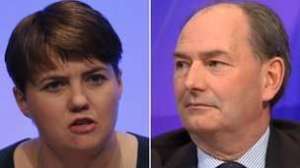 In years past former Deputy Leader Murdo Fraser flirted with the idea of a breakaway centre-right party to give the party a new chance at attracting voters. It’s not the first time this had been suggested. The Scottish Conservatives only formed out of a merger with the Unionist Party and the Conservative Party in 1965.

Fraser’s detractors considered the move as treacherous and a capitulation to circumstance, despite the proposals being met with enthussiasm by members, the public and other MSPs. The practicality of it was and is however more Ship of Theseus than anything else: if you change the name won’t the operations and members simply move across, and how would you create a brand truly different to launch a new membership intake? With Davidson’s selection, the debate went away.

Davidson has lead the party through the 2012 Scottish local council elections, the 2014 EU elections, the 2014 Scottish Referendum and the 2015 general election. There was no marked change the share of the vote received by her party. The fault should not be left at her doorstep. Yet four years and four elections is long enough time to consider that the game is up, if not for her then her party.

If, as polls predict, there is an SNP surge further reducing the number of MSP’s in Holyrood conclusive changes must be made rather than simply returning to sinply ticking along.

Her resignation might well be the catalyst turning once more to the innovation Murdo Fraser suggested and would at least pump some ntellectual action into the malaise that is disappointing members and depriving the electorate of a real alternative. http://darrow.org.uk/2015/04/26/ruth-davidson-should-resign-a-response-to-james-holloway/

Tory leader Ruth Davidson has lost a key aide ahead of the 2016 elections. Chief of staff Lindsay McCallum unexpectedly quit amid a rumoured rift with her boss. The 29-year-old, considered a future party high-flier, had been in post less than a year. Her duties included giving Davidson strategic advice, writing briefings, and liaising with UK cabinet ministers, as well as managing Davidson’s diary. It is understood she left last month.

After a dry run at the general election, when she stood in the Ross, Skye and Lochaber seat, McCallum had been expected to run for Holyrood next May on the Highlands & Islands list. However, faced with the prospect of dedicating her 30s to life as an opposition MSP, she decided not to stand, ending a key reason for her to remain chief of staff. McCallum, who comes from a farming family in the Black Isle, where her mother is an independent Highland councillor, has now returned to London, where she spent three years in public affairs before taking the Scottish Tory job in August last year. “I heard there had been a furious bust-up with Ruth,” said one Tory MSP.

The loss of her chief of staff has added to Davidson’s recent problems as Tory leader. Despite high hopes, the Scottish Tories failed to make progress at the election, holding on to their single seat, as their vote share fell from 16.7 to 14.9 per cent. The Tories’ vote share in England was 41 per cent, and 36.9 per cent UK-wide.

Davidson, a Glasgow list MSP since 2011, has also been accused of “carpet-bagging” after announcing she would try to become a Lothian MSP next May. Glasgow has one Tory MSP, whereas Lothian has two, increasing her chances of election. An SNP spokesman said: “First Ruth Davidson gives up on Glasgow – with the prospect of the Tories failing to win any seats there next May – and now her chief of staff quits as a candidate. “It’s no surprise that even members of their own party are now running away from the Tories ahead of the Scottish election next year. “The truth is that the Tories have absolutely nothing to offer Scotland other than austerity and a narrow, negative agenda which will once again be roundly rejected at the ballot box in May.”

A LibDem source added: “It seems even the Tories are now refusing to buy Tory spin on their election prospects. After decades of calling for one last push they should start listening to the public and scrap their right-wing illiberal agenda.” McCallum said her decision to go had been a “personal choice”. She said: “I wish Ruth well. I hope that the party increases its MSPs next year. I think they have a good opportunity and Ruth is a good leader.”