Tony Blair’s former spy chief has been criticised for taking a job with a multi-national company which has won a lucrative contract to drill for oil in Iraq.

Sir John Scarlett, who helped draw up the so-called ‘dodgy dossier’ which accused Saddam Hussein of possessing weapons of mass destruction which could be deployed within 45 minutes, has been hired by Norwegian firm Statoil as a ‘strategic adviser’.

The 62-year-old former MI6 chief, right, who retired two years ago, was one of the intelligence officials most closely associated with the Allied invasion of Iraq in 2003. He was accused of being unduly influenced by Alastair Campbell, who was then No 10’s director of communications.

The 45-minute claim was one of the key assertions that convinced MPs to take Britain to war. Labour MP Paul Flynn said last night: “There is a bad smell about this, worse than oil. If senior officials are involved in a particular area during their professional lives, there should be no chance of working in that same area when they retire. This would avoid any danger of them being distracted by the prospect of retirement riches.”

Norwegian-owned Statoil is one of the world’s largest oil and gas suppliers. It is a leading member of a consortium awarded exploration rights in the vast West Qurna oil field, west of Basra, in December 2009. The field is expected to yield 150,000 barrels of oil a day by 2013, making it one of the most productive in the Middle East.

Despite the controversy over the ‘dodgy dossier’, Sir John was knighted in 2007.

Norwegian-owned Statoil is one of the world’s largest oil and gas suppliers. It is a leading member of a consortium awarded exploration rights in the vast West Qurna oil field, west of Basra, in December 2009. The field is expected to yield 150,000 barrels of oil a day by 2013, making it one of the most productive in the Middle East. The consortium of which Statoil is a member beat off several other bidders for the Iraqi government contract, including BP.

Statoil declined to say how much Sir John would be paid. A spokesman said: ‘He will be on an advisory board to help us understand the geopolitical context in which we operate.’

The appointment has been approved by the independent Advisory Committee on Business Appointments, which vets jobs taken by senior civil servants after they have left office to ensure there is no conflict of interest.

Sir John McLeod Scarlett, is a retired British senior intelligence officer. He was Chief of the British Secret Intelligence Service (MI6) from 2004 to 2009. Prior to this appointment, he had chaired the Cabinet Office Joint Intelligence Committee (JIC).

The normally secretive intelligence services were thrust into the public gaze in the Summer of 2003 after the death of the eminent government weapons expert, Dr. David Kelly. Kelly had been found dead in the Oxfordshire countryside near his home, after being exposed as the source of allegations that the government had “sexed-up” intelligence regarding existence of weapons of mass destruction in Iraq prior to the 2003 invasion of Iraq.

The “classic case” was the claim that Iraq could launch Weapons of Mass Destruction “within 45 minutes of an order to do so” – Dr. Kelly had privately dismissed this as “risible”.

Scarlett gave evidence at the Hutton Inquiry into the circumstances surrounding Kelly’s death. It became clear that Scarlett had worked closely with Alastair Campbell, then the Prime Minister’s Director of Communications and Strategy, on the controversial September Dossier, with Campbell making drafting suggestions which the inquiry found may have “subconsciously influenced” Scarlett and the JIC.

This influence may have had deleterious effects on the quality of the assessments presented in the dossier. For instance, the Intelligence and Security Committee made several criticisms in their report “Iraqi Weapons of Mass Destruction — Intelligence and Assessments”:

“As the 45 minutes claim was new to its readers, the context of the intelligence and any assessment needed to be explained. The fact that it was assessed to refer to battlefield chemical and biological munitions and their movement on the battlefield, not to any other form of chemical or biological attack, should have been highlighted in the dossier. The omission of the context and assessment allowed speculation as to its exact meaning. This was unhelpful to an understanding of this issue.”

Scarlett became the head of SIS on 6 May 2004, before publication of the findings of the Butler Review. Although the review highlighted many failings in the intelligence behind the Iraq war and the workings of the Joint Intelligence Committee, it specifically stated that Scarlett should not resign as head of the Committee and SIS.

On 8 December 2009, Scarlett gave evidence to The Iraq Inquiry. He denied he was under any pressure to “firm up” the September Dossier, and claimed there was “no conscious intention” to mislead about Iraq’s weapons but it would have been “better” to have clarified battlefield munitions not missiles were meant.

On 26 June 2011, The Guardian reported on a memo from Scarlett to Blair’s foreign affairs adviser, released under the Freedom of Information Act, which referred to “the benefit of obscuring the fact that in terms of WMD Iraq is not that exceptional”. The memo has been described as one of the most significant documents on the September dossier yet published as it is considered a proposal to mislead the public.

On 28 January 2011, Scarlett was appointed to the board of Times Newspapers Ltd, part of Rupert Murdoch’s News International, which publishes The Times and The Sunday Times. 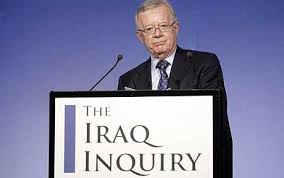 31 December 2006 – The award of a knighthood to John Scarlett was described as “utterly astonishing” by MPs yesterday.

Sir John, who oversaw the production of the so-called “dodgy dossier” which claimed that Saddam Hussein could launch a missile attack in 45 minutes, is made a Knight Commander of the Order of St George in the New Year honours.

“John Scarlett has been awarded an honour for services to diplomacy. Services to creative writing might have been more appropriate,” he said.

Sir John’s role in the production of the infamous dossier was exposed in Lord Hutton’s inquiry into the death of the weapons scientist Dr David Kelly.

Lord Hutton said that he might have been “subconsciously influenced” by political pressure that caused him to strengthen the wording of the dossier.

The Conservatives, however, refused to be drawn on the knighthood for the man who is now head of the Secret Intelligence Service (MI6). David Cameron’s New Year message pledges to give “wholehearted backing” to measures to “enhance our security services”.

Previous articles posted to my blog can be found here:
https://caltonjock.com/2015/05/30/the-iraq-war-was-based-on-lies-top-bush-era-cia-official-so-where-the-hell-is-the-chilcott-report/ (why is this taking so long?)

https://caltonjock.com/2015/01/23/the-chilcott-inquiry-failures-of-the-military-elite-promotion-or-death/ (the failures of the military elite)

https://caltonjock.com/2015/01/22/chilcott-inquiry-delays-the-cover-up-the-machiavellian-influence-of-sir-jeremy-heywood/ (Heywood the master or the servant?)

https://caltonjock.com/2015/01/15/the-downing-street-memos-revealed/ (correspondence between US and UK. Damming evidence)