First Minister Nicola Sturgeon rejected opposition claims and said, “The police are not in crisis and I think it does a disservice to police officers around our country who are working so hard to keep us safe to say so. The SPA will continue with the improvements which were being made to governance and accountability”.

Justice Secretary Humza Yousaf said there had been “significant improvement across many facets of the police service in Scotland.

Adding, “As Ms Deacon, herself acknowledges, our police service is in a much stronger place now than prior to her appointment”. 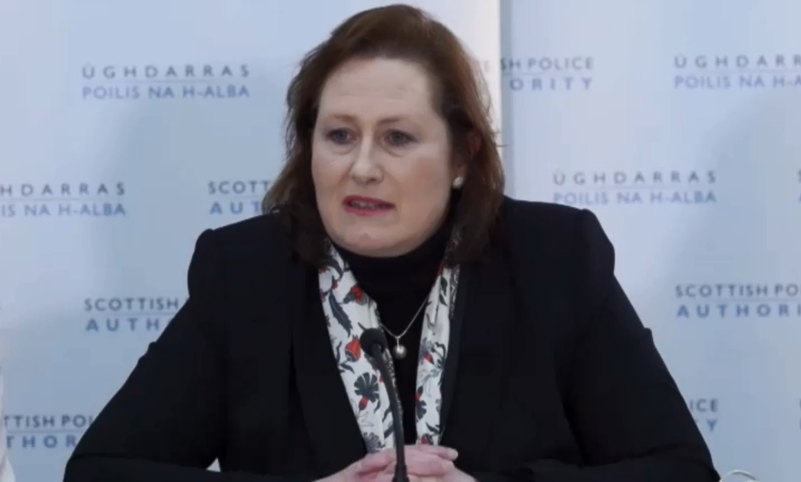 She certainly knows just when to raise her profile gaining maximum right-wing media coverage but the words of the vice-chairman of the CPA  hold more potency. But a dig into her past is revealing since it exposes the incompetence of the Labour Party and herself at the time they held power over Scots.

11 January 2000: The NHS is coping with the crisis, says Health Minister Susan Deacon.

Really? That is not how things will look to the vast majority of the public.

The health service of the fifth largest economy on the planet should be able to deal with an outbreak of winter flu, no matter how virulent, without hospitals having to go on red alert, cancel hundreds of non-emergency operations or trawl around the country in search of intensive care beds.

This is not a picture of a service ‘coping’, but of one seemingly on the point of collapse.

The Minister’s insistence that hospitals and GPs are handling the enormous strain of the epidemic is at odds with the anecdotal evidence from medical staff around the country.

Health Minister Susan Deacon was last night accused of being the source behind a bid to destabilise the Scottish Cabinet.

Senior Labour figures believe she is behind briefings aimed at discrediting pretenders to Donald Dewar’s job.

Yesterday it emerged that the First Minister is likely to step down next year. He fuelled speculation by claiming he would not “cling to the office” if he was no longer wanted.

His departure looks certain to spark a bruising leadership battle and many believe Deacon is already staking her claim.

Weekend reports claimed a “stop Henry McLeish” campaign was being run by senior members of the Cabinet.

Glasgow Royal Infirmary has moved to end the crisis in Scotland’s heart transplant service by trying to train a home-grown team of surgeons.

The development comes after failing to recruit experts from elsewhere, a senior cardiologist revealed last night.

However, it will take up to a year to have a trained team in place.

The hospital is in discussions with three city surgeons with previous experience of performing heart transplants, in the aim of resuming the life-saving operations, suspended this month, at the start of next year.

The move to train its own team reflects the GRI’s continuing failure to recruit transplant surgeons from elsewhere in the UK or around the world.

Another added a particularly Glaswegian twist to descriptions of the health minister’s demeanour during that fractious meeting of the Scottish parliamentary Labour group – “She had a face like fizz”.

If Susan Deacon was annoyed by the dressing down delivered to ministers in front of her colleagues, it is not hard to see why.

There was some delight taken in her discomfort, but still, the impression exists that Deacon is yet another victim of the party’s Old Labour-style “Lanarkshire mafia”.

That is the loose term given to the group of male ministers which employs the tactics of the old party machine to stop those they regard as too radical or a threat.

Hospital waiting lists have grown by 5% in the space of three months, according to figures published yesterday by the Scottish Executive.

They show that in-patient and day-case waiting lists totalled 86,549 at the end of June, 4215 up from the end of March.

The number of patients waiting more than 12 months grew by 81 to 553 at the end of June.

NHS Trusts which have contributed to the increase can expect a visit soon from the Executive Health Department’s hit squads, or performance management teams said Health Minister Susan Deacon.

But she pointed out that more patients were being treated more quickly, with eight out of 10 Scots now receiving treatment within three months of joining a waiting list, and hospitals across the country increasing their activity.

A massive £44m has been transferred from the Scottish health budget to pay council house debts.

The move has embroiled Health Minister Susan Deacon in a new row over NHS spending.

It will also shock hard-pressed hospitals – Tayside alone has a £12m.

Most of the £44m will be spent reducing the £1b council housing debt in Glasgow.

The money had been left over as a result of changes, made by the Labour Government in 1998, to the way hospital trusts were run.

It is being transferred despite a Labour Party manifesto pledge at the 1997 election that any savings from abolishing the Tory system of running the NHS would be spent on direct patient care.

Last night a health department spokesman defended the decision, saying it was ‘old money’ generated before devolution and held by the Treasury in London.

The only way it could have been accessed, he said, was by paying off debts.

He insisted it would have been lost to Scotland altogether if it had not been switched to the housing budget.

The truth behind £44m of NHS money transferred out of the health budget was exposed last night after officials admitted it could instead have been invested back in hospitals.

On Monday they insisted the cash had to be spent on reducing council housing debt in Glasgow or it would be lost altogether because of strict Treasury rules.

But 24 hours later, after persistent questioning from the Scottish Daily Mail, health department officials agreed that, despite the complex financial procedures, the money could all have been spent on health.

The admission placed fresh pressure on Health Minister Susan Deacon to fight to have all the money returned to her budget.

The Scottish Executive faced criticism last night after it emerged that hospital waiting lists have risen by 15 per cent in the past 12 months.

Official figures show that there are now more people waiting for operations than there were when Labour came to power in 1997.

23 November 2000: ‘Clueless’ Health Minister Is in the Dark over Waiting Lists

On a visit to Tayside, she was forced to admit that she did not know the hospital waiting list figures for the area.

Her admission was in spite of a massive 47 per cent increase in the list in the past year.

Miss Deacon was being interviewed on a local radio station during a visit to Dundee to meet new Tayside Health Board chairman Peter Barnes, and Jim McGoldrick, the new chairman of the Tayside University Hospitals NHS Trust.

Asked to comment on the increases in local waiting lists, she said: ‘I don’t know the figures for here’.

She then tried to divert the question to Paul White, chief executive of the Tayside NHS trust.

15 December 2000: Deacon’s Shot in the Arm for NHS; as the Health Minister Unveils Her Blueprint for a Major Overhaul of the Health Service, Labour Is Again Snared in a Row about Rising Waiting Times

Health Minister Susan Deacon promised a shake-up of the Scottish health service yesterday to speed up treatment and give patients a better service.

Miss Deacon published the Executive’s National Health Plan, which set out a series of targets and deadlines for treatment and revealed plans to streamline the management of local health boards and trusts.

The plans were given a cautious welcome by many health professionals, but some medical experts warned the proposals were too general and did not contain enough detail to bring about real change.

Experts drew up the plan in response to widespread dissatisfaction with the way the Executive was running the health service.

The results of a poll conducted for the Executive and disclosed exclusively in the Scottish Daily Mail, showed eight out of ten Scots believed Labour had failed to make any improvements to the health service.

Miss Deacon admitted patients were concerned about the care they received. She said:

“There were many concerns. Too many delays, too much fragmentation and too much waiting. Too little information and poor communication came up time and again. People felt that too often the NHS did things to them, rather than with them. They wanted to be cared for as well as cured”.

The plan also includes a series of new targets for waiting times, proposals to involve patients in decision-making and a determination to streamline the structure of health boards and health trusts.

Miss Deacon said no patient would have to wait more than nine months for hospital treatment – three months less than current waiting times.

The Health Minister said reducing waiting times was a priority for the Scottish Executive, and said she also wanted to ensure a patient’s journey from GP to the hospital to home was better and faster.

Miss Deacon also announced a shake-up of the structure of the NHS with trusts and boards to be replaced by a single board held accountable for the whole of the local health system.

She also plans to end the so-called ‘postcode lottery’ of treatment, which means some drugs and treatments are available in different parts of the country, depending on local decisions made by boards and trusts.

“We will work to end the postcode lottery of care which grew up under the Tory internal market”.

The number of patients forced to wait more than a year for NHS operations in Scotland has almost doubled since Labour came to power.

Figures leaked to the Scottish Mail on Sunday show that the total reached a record high of 1,150 last year.

This compares with just 600 in 1997 despite Labour promises that no-one should have to wait more than a year for treatment.

It leaves in tatters repeated pledges by Health Minister Susan Deacon to overhaul the NHS.

The leaked report spells out how waiting times for surgery are on the increase and those for hospital appointments are at an all-time high.

Even in the accident and emergency wards, patients are routinely being made to wait longer than ever.

Hospitals in Glasgow face the threat of chaos after a decision by medical secretaries to hold a ballot on strike action.

Union leaders warned yesterday that the dispute over pay and conditions could bring major disruption at the Royal Infirmary, Gartnavel, Stobhill, and the Western Infirmary.

Negotiations broke down earlier this week.

As hundreds of secretaries marched from Glasgow’s George Square to the City Halls, hospital bosses conceded that waiting lists and non-emergency operations could be affected.

Nearly 300 secretaries at ten hospitals voted 91.3 per cent in favour of strike action after talks broke down between health workers union Unison, and North Glasgow NHS Trust after 14 months.

Staff in the north of Glasgow rejected a national offer that would see many staff awarded a 30 per cent pay increase over four years and voted to continue their own dispute.

They felt the deal would not apply to every member of staff and failed to recognise their skills.

More than 300 medical secretaries walked out yesterday after claiming health chiefs had reneged on a deal to improve pay and conditions.

The secretaries, who work for North Glasgow NHS Trust, opted to strike indefinitely after negotiations to settle the dispute collapsed. Unison, the health service union, accused trust officials of going back on a promise to grade medical secretaries on the same scale as hospital managerial staff.

Unison claimed they had changed the timescale when secretaries would receive pay rises.

The trust confirmed that it would not upgrade secretaries until April.

“The trust has failed to honour an agreement and that is why we have taken this stance.”