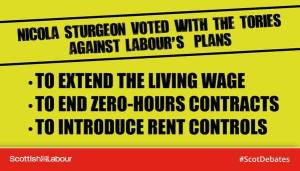 Murphy at it again with his GE leaflet lies. These need to be challenged in public so that Scots attention is drawn to the misinformation policy of the Red Tory Party 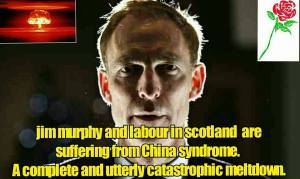 The living wage, designed to reflect the actual cost of living, is paid voluntarily by some employers. The SNP Scottish government has guaranteed the living wage to its own staff and says it would like to extend its application. EU employment law does not provide for a universal living wage.

In a recent statement Nicola Sturgeon said “We don’t disagree with the objective of making payment of the living wage a mandatory requirement of public contracts. We’re the first Scottish government to adopt the living wage for all of our employers and we encourage all other employers, public private, third sector, to pay their staff the living wage.”

The Chair of the Scottish Living Wage Campaign Peter Kelly said “With the problem of in-work poverty continuing to increase, the Scottish Government’s continued support for the Living Wage must be congratulated. Today’s announcement will ensure that some of the lowest paid workers in the public sector will receive a wage increase that will provide real help in these difficult times. We look forward to working with the Scottish Government to ensure that more employees across Scotland can get the benefit of the living wage.”
http://wayback.archive-it.org/3011/20130201193655/http://www.scotland.gov.uk/News/Releases/2012/11/Livingwage051112# 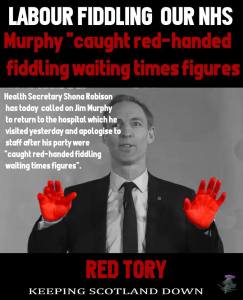 The SNP government position: “Zero-hours contracts are not always appropriate and present many people on benefits with real challenges in managing their income. While the UK government is encouraging the use of zero hours contracts, the Scottish SNP Government has been looking at options available to tackle the issue within its limited powers. As employment policy is reserved to Westminster, this is yet another example of how we can do things differently, and better, with independence.”
http://www.snp.org/media-centre/news/2014/may/jobseekers-forced-work-zero-hours-contracts

He said “In this May’s election, Scotland can choose to end the scandal of exploitative zero hour contracts by sending Scottish Labour MPs to kick out the Tories and form a UK Labour Government. There are 84,000 proud Scots who are too often forced into zero hour contracts. Too many are left worried about whether they will have enough work and wages to be able to put food on the table from one week to the next. Many are blocked from getting credit they can afford and turn to extortionate pay day loans. It’s no way to treat people who want to work hard and get on in life. When working families prosper Scotland prospers, when people have decent pay and conditions they spend more and Scotland’s economy grows. That’s the way to build a fairer Scotland. Too many Scots who want to work rather than be on benefit are caught in a cycle of poverty pay. They have no idea what they will earn from one week to the next. In 2015 too many Scots are still exploited for their labour. I am determined to change that once and for all. In May we can replace the Tories with a Labour Government who will ban exploitative zero hour contracts. The SNP had their chance to ban zero hour contracts last year and they let people down. It’s time to bin these exploitative contracts once and for all.” https://www.politicshome.com/document/press-release/murphy-%E2%80%93-%E2%80%9Cwe-will-call-time-zero-hour-contracts-make-work-pay%E2%80%9D

April 2015: Ed Miliband pledged that workers on zero-hours contracts will have the right to regular employment after 12 weeks. The policy, will be included in Labour’s election manifesto. So Murphy is at it again. Employment rights are not delegated to the Scottish Parliament as such he will need to conform to the will of the English Labour party.
https://www.politicshome.com/economy-and-work/articles/story/labour-crack-down-zero-hour-contracts 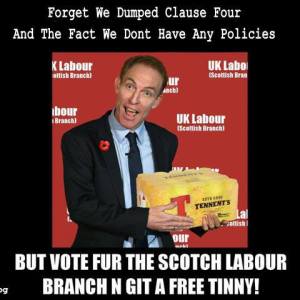 Rent controls were in place from 1915-1989 in the UK after legislation was passed in the House of Commons in response to the Glasgow rent strike of 1915. Margaret Thatcher’s Conservative government got rid of the controls in 1989.

Since that time, private rent prices have skyrocketed, and campaigners say a cap on rents would save billions in housing benefit payments which, they argue, is effectively a subsidy for landlords.

Nicola Sturgeon said the Scottish Government is consulting on the introduction of rent controls to address high prices in the private-rented sector in Scotland.

During a questions session after her lecture at the London School of Economics (LSE), she was asked by a member of the audience about what the Scottish Government would do to tackle “the housing crisis” in Scotland, and specifically whether she would consider the introduction of rent controls, which is a cap on the prices landlords can set rents at.

She replied the most fundamental issue was “to build more houses”, adding that the Scottish Government scrapped the right-to-buy scheme because it didn’t make any sense to lose that investment into social housing.

She further added that the government “were consulting” on the issue of rent controls, saying that there was a “strong argument for it. But, she stated it must be balanced with a need for “a good and high quality supply of private sector housing.” https://commonspace.scot/articles/731/scottish-government-considering-introduction-of-rent-controls-first-minister-says 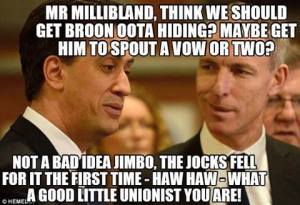 “The Manga “Oishinbo” Controversy: Radiation and Nose Bleeding in the Wake of 3.11”

“Radiation from Japan’s 2011 Fukushima nuclear disaster has for the first time been detected along a North American shoreline, though at levels too low to pose a significant threat to human or marine life, scientists said on Monday.”