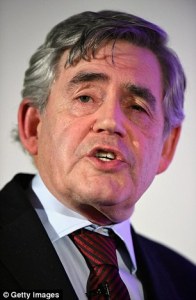 Former UK Prime Minister Gordon Brown expressed his preference for a return to office of a right-wing, austerity driven, David Cameron led Conservative/Ukip Government at the next British General Election in 2015 rather than support Scottish independence.

Answering the question, “are there are any circumstances, such as a widely speculated a David Cameron Conservative/Ukip coalition Government being formed, that would convince you to back a Yes vote, he said, “it cannot just be about hating one policy or disliking a particular Government. It cannot just be about what you feel about the issue of the moment. You have got to take the long view. You have got to look ahead. I think people will conclude from experience that we are an interdependent world and that sharing, co-operation, solidarity, neighborliness is the way forward.

With recent opinion polling showing around a third of Labour party voters planning to vote Yes in the independence referendum he was asked whether the Labour Party’s credibility had been damaged by campaigning so closely alongside the Conservatives, who have only one elected MP in the whole of Scotland. He had no answer.   http://sputniknews.com/politics/20140914/192928906.html

Former Labor Prime Minister Gordon Brown has been praised for his contribution to the Scottish independence campaign by Conservative Minister for State for Scotland David Mundell. He said,”Gordon Brown played a very significant role as have a large number of other people. I listened to Gordon’s speech and it was very, very impressive.  http://sputniknews.com/world/20140919/193075895.html

18 September 2014: Experts say the “No” vote has resulted in political stability in the UK. “The union is like a damaged marriage” stated an anonymous Conservative MP

Despite Civil Service orchestrated baseless threats from companies like The Royal Bank of Scotland, to move operations to England in the event of a “Yes” vote, many Scots dismissed such threats as scaremongering. Furthermore, the Canadian example also suggests that the narrow “No” vote will prolong constitutional uncertainty, causing problems for businesses and jobs in Scotland.

Although Westminster promised to extend “home rule powers” to Edinburgh, the narrow majority of “No” votes will not end the discussion over Scottish independence and pro-independence voters will most likely seek a fresh mandate for a new referendum in a few years’ time, the so-called ‘never-endum’ scenario.

A YouGov poll revealed that almost two-thirds of people in Scotland are unsure what powers are to be devolved so the “no” voters have no idea of what “extensive new powers” Westminster promised. http://sputniknews.com/analysis/20140918/193047983.html