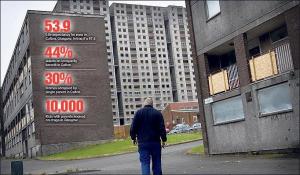 David lives in the gang-infested inner-city sprawl of Calton – the place with the lowest life expectancy in EUROPE. It is a drizzly Monday morning in Glasgow and the Triple Two Lounge in the shadow of Celtic Park is already doing a roaring trade. Out-of-work bouncer David McCabe stubs out his roll-up and takes a gutsy slurp on the first of his eight daily £2.20 pints of Fosters. Pasty-faced David’s epic, taxpayer-funded booze-ups end with an artery-clogging fry-up washed down with a four-pack of Tennent’s at his subsidised flat nearby. Looking a decade older than his 26 years, David says: “My grandad is 71 and still likes a drink. It doesn’t seem to have done him too much harm.” 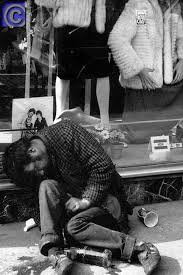 A boy living in Calton today can expect to live to just 54. Locals living among the graffiti-scarred council blocks of Calton drily observe: “If the booze doesn’t get you here, the blade will.” Calton, along with Easterhouse and Castlemilk in Glasgow, are the only places in Britain where murder – usually by stabbing – is the most common cause of death among the young. Someone is admitted to a Glasgow hospital with knife wounds every six hours. Medics expect as many as three Glasgow smiles – where victims are slashed from mouth to ear – every weekend. 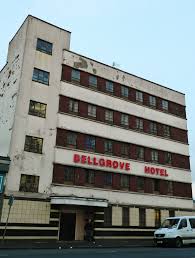 The city’s smartest restaurants, designer boutiques and museums are a short stroll away from Calton, in Merchant City. Yet here down-and-outs swill cider outside homeless hostel the decrepit Belgrove hotel and a “baggie” of heroin is a tenner. The area’s grinding poverty – where 30 per cent are unemployed – would be recognised by Charles Dickens and pioneers of the Labour movement.

Today’s Labour Party, after 50 years in power, have failed many of the people of Glasgow’s East End. Last year a World Health Organisation study citing Calton said a “toxic combination” of bad policies, economics and politics creates social injustice that is “killing people on a grand scale”. Local GP Dr Robert Jamieson, 54, has spent the past 22 years working in the heart of Calton. “Drinking has got worse and so has the violence,” he explained wearily. “The healthy and wealthy got healthier and wealthier compared to the poor.

Back at the bar, unmarried David, like his father before him, has been on benefits for most of his adult life. He pays for his lager from his £66-a-week incapacity benefit and whatever he can scrounge from family and friends. Overweight and pale, he explained: “I’m on the sick because of my drinking. I’ve got an enlarged liver. “I’ve done a few days work as a bouncer and a cleaner but not recently. My dad has been out of work most of his life.

NOT SURPRISED BUT I THINK THE 10,000 CHILDREN MENTIONED ON YOUR WALL STATS MIGHT BE A LOT HIGHER.