2008/2009 was a year of turmoil for finance and oil. The price of oil was extremely volatile and in a rollercoaster year oil prices ranged from $45 to over $146.

The year 2014/2015 will reveal a pattern similar to 2008/2009 and the utterings of negative Labour politicians, (such as Jackie Baillie, Dugdale and Murphy) seeking to score points over more forward looking members of the Scottish government, should be given consideration using for guidance previous performances of the Oil companies.

Labour Party politicians are well versed in the politics of envy and the immediate but forward planning is a stranger to their thinking. Conversely the SNP government are planning ahead and gearing laid off staff for the future pick-up of the industry by protecting the on-going training of younger persons.

Up two spots from last year’s global list, Royal Dutch Shell raked in $15 billion more in sales than Exxon Mobil. And as Europe’s largest oil producer, it doesn’t look to be slowing down: Shell has made a bold move by investing up to $18 billion in a plant in Qatar that would turn natural gas into cleaner-burning diesel fuel. It hopes to bring the Pearl GTL, as the facility is called, online by 2010 and expects it to produce enough fuel to fill more than 160,000 cars per day.

Exxon pulled in $443 billion in revenues and $45 billion in earnings last year. Its investors reaped some of the rewards, with $40 billion in shareholder distributions, up $4.4 billion from 2007. Exxon is investing heavily in the growing demand for liquefied natural gas, adding four new gas liquefaction facilities in 2009 at a total price tag of more than $20 billion. Each facility will produce 7.8 million tons of liquefied natural gas per year.

After a stellar start to the year — profits for BP’s first and second quarters combined for an impressive $17 billion — the London-based oil company was hit hard, like others in the industry, by tumbling oil prices, causing a fourth quarter loss of $3.3 billion. 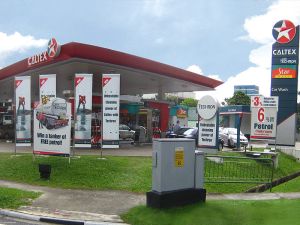 The perennial No. 2 U.S. oil company — behind Exxon — boosted profits by 28% in 2008, more than any other super major on this list. Sophisticated refineries helped Chevron blunt losses from crude’s price drop in the second half of the year. In previous years, Chevron has been able to mask production declines at its oil fields with acquisitions, rising oil prices and its refining business.

But with production rates still lower than five years before, Chevron is spending $23 billion this year to bolster overseas fields and expand refineries. That will take a while to pay off if oil prices remain depressed. The upside of low oil prices for Chevron is that the giant can buy small competitors on the cheap.