Oliver Mundell is to stand for re-election in tomorrow’s Scottish Parliament Election.  He is confident that his strong stance in defence of the Union, in the South of Scotland will count in his favour with voters.

After leaving school in Moffat, he attended Edinburgh University, graduating in 2012. He worked for (7 months) for the multinational oil and gas firm Royal Dutch Shell and in the UK Parliament, (courtesy of Daddy) where he was employed, on a large salary, as a senior parliamentary aide to Geoffrey Cox QC MP. This was the launching pad for a political career as an MSP for Dumfriesshire

At Edinburgh University his campaign for election to the post of Student Association President was hindered by an allegation that he had harassed a fellow student Alice Stanes, a disabled NUS liberation officer reducing her to tears, in a discussion about disability and policy

In a later apology he said:  “I understand that liberation is a sensitive issue but I have always tried to keep my own personal emotions out of decision making, putting the needs of students first, I’m really sorry if my point of view has been upsetting or misinterpreted but, rather than engaging in petty student politics, I’m moving forward with my plans to make the Student’s Union more representative.”

He was not elected. Evidently his fellow students disagreed with his statement about being unconcerned about engaging in “petty Student politics”

Dec 2014: Oliver works for his dad at the expense of the public

Mundell employed his son, out of university a few months. (salary £30,000+) as a Parliamentary Assistant from 1 March 2013. having previously employed him in the same position from May to 2012″. Then, in November 2014, Mundell transferred his SPAD duties taking up a position as a Senior Parliamentary Researcher (more money for the boy) working in the Westminster ,House of Commons office of a Conservative MP representing South West Region.

He departed Westminster for Scotland only a year later and in 2015 was subsequently elected to serve as the MSP for Dumfriesshire.

In announcing his intention to remain as the MSP for Dumfriesshire in the 2021 Scottish General Election it is expected his father will be elevated to the House of Lords very soon paving the way for Oliver to take up a seat in Westminster further entrenching the Mundell dynasty in Dumfriesshire. Nepotism gone mad. 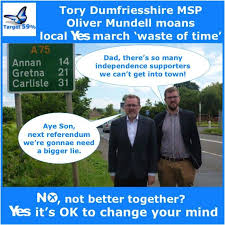