What is Asphalt / Tarmac?

It is aggregate mixed with a binding agent of bitumen, (a dark, sticky substance derived from crude oil.)

Advantages of Asphalt over Concrete Use

1. Removal and replacement of damaged asphalt is a simple and relatively easy process compared to concrete.

4. Maintenance and repair of asphalt is faster and less costly.

Commonly roads in the UK are formed through a process of applying capped layers of materials of differing depths and surfaces. The starting point is the excavation phase requiring the removal off topsoil and accumulated earth and rubble to a depth of between 18″ – 60″.

A local road, light traffic might require the minimal depth. Conversely a motorway or major road would need to be started at the greater depth.

There are normally 6 courses or levels commencing with the sub-grade, the lowest or exposed level.

2. Capping. Concrete Infill. The load bearing capacity of the earth is measured through a process of weight bearing sampling, (pressure drilling and measurement of the sub-soil).

Dependent on the result this may require the application of a capping surface the thickness of which is usually between 0-6 inches.

Limestone is the highest load bearing surface (100). Clay and farmland merits a factor of (5).

3. Sub Base. A crucial layer, the Sub-Base is laid with quick setting materials reducing exposure of the capping level to the elements with the intent of avoiding surface damage.

This layer varies in thickness between 6-10 inches  dependent upon the thickness of the capping level coupled with the key factors of the number of vehicles (axles) expected to use the road, the maximum expected load bearing requirements and the expected lifetime use of the roadway.

6. Surface Level. Asphalt or Tarmac. Typically between 1-3 inches. Hot asphalt is poured onto a bed of heavier aggregate and then pressed into it with a steamroller.

Once the asphalt cools to the surrounding air temperature, it is strong enough to withstand automobile traffic. While asphalt is extremely hard and durable, it offers enough flexibility to accommodate imperfections in underlying surfaces, a feature that concrete lacks. 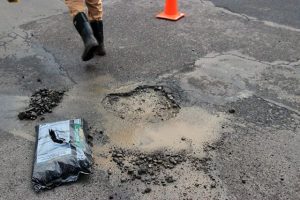 Pothole complaints this winter are up by around 25% over last year, but road users do not need to be reminded that the situation is getting worse year on year. As rain recedes and snow melts it reveals roads pock marked with potholes and road surface erosion.

Road maintenance engineers in Glasgow, Edinburgh, Aberdeen, Dundee and Inverness have filled in around 100,000 potholes this year. Mind boggling!! But how many are left unattended? Perhaps the question needing to be answered is why so many potholes?

The major problem is under-funding by the UK government of major road works in the existing road network. Ideally roads should be completely resurfaced at least once every 15-20 years.

But the UK government decides and funds the policy, which is to reduce road use, devoting capital finance to a major expansion of rail networks (HS2 and HS3) in England with result that maintenance of the existing road network  in Scotland needs to be placed under a make and mend basis.

The required 1000 miles plus annual major road resurfacing programme in Scotland is not financed in the block grant by the UK Treasury with result that a significant amount of finance allocated for road improvements is diverted to filling in a rapidly increasing number of potholes throughout the year. And the situation will deteriorate further as the impact of funding HS2 and HS3 begins to bite. Developments which bring little benefit to Scotland.

In the absence of finance sufficient to do both the Scottish government would be best advised to abandon all potholing repair measures presently in place, retaining repairs schemes for major roads only.

Potholes on secondary and town roads should be left unattended, (except in extreme circumstances). 15-20mph speed limits to be imposed, where applicable reducing impact damage to vehicle.

The measures would provide finance sufficient to complete a major road resurfacing programme in Scotland which is a much better use of resources.

Over time finance could be released to councils, on a non-recurring basis, in the summer months for pothole repairs to local roads.

Other Signs of Roadway Deterioration

Channelling: Dipping of the road, is prevalent on the approach to and at road junctions. This is caused by axle weight pressure on the road beyond that which the road is capable of. The introduction of double – train and heavier HGV’s is a major factor.

Road verge deterioration: Part of the road sinking, can be extensive and difficult to negotiate. Caused by major services eg: water, gas, electricity, cable and telecom’s digging through the roadway sub-base to install pipes etc exposing the lower based capping and subsequent failure to institute proper repairs. 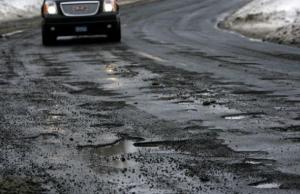 Many potholes are created by the freezing and thawing of water under the road surface and as such are more prevalent in winter. If you reside in pothole territory these safety tips should be followed.

1. Ensure tyres are properly inflated. They will perform much better than tyres with too much or too little air.

2. Reduce speed where potholes are prevalent. If avoidance is impossible , slow down further before you hit it. Do not apply your brakes directly over a pothole. This can cause more damage.

3. Hitting a pothole can be equated to a collision at 30mph and it is advisable to get your car wheel alignment, steering and suspension checked at a local garage soon after.

3. On the pothole retain a firm grip of the steering wheel to avoid losing control.

5. Complete a daily check of your tyres looking for:

a. Bulges or blisters on the tyre sidewalls.

b. Dents in the wheel rims.

c. Undercarriage damage, including fluid leaks and wear that could lead to rust.

d. Odd noises coming from the exhaust system due to dents or punctures.

e. The car pulling toward the left or right, instead of going straight, which could indicate an alignment problem.

f. Uneven tyre wear, which could indicate an alignment problem. 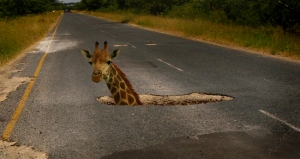 In Scotland to report a pothole. Go to: https://www.mygov.scot/report-pothole/

Responsibility rests with the local authority who have a duty to maintain all the roads in their area. Except Trunk roads in Scotland which are the responsibility of the Scottish Government.

You may be able to claim compensation if your vehicle suffers damage due to a pothole, but not if the damage was caused by other road debris.

To make a claim it is important to gather and supply as much evidence as possible, providing details of the damage incurred, including the date and time of the incident an a description of what occurred.

Witness statements and their personal details. Photographic evidence is extremely useful and should include the depth, width of the hole and its position on the road.

Provision of a photographic frame of evidence is useful eg. a shoe. Enclose photographic evidence of the damage to your vehicle and receipts for repairs work completed. It is useful to obtain a letter from the vehicle repair centre stating the extent of the damage and that it had been caused by impact.

Also remember to state that your are holding the council responsible for the damage caused to your vehicle by their failure to properly care for the roads which is their duty in law. 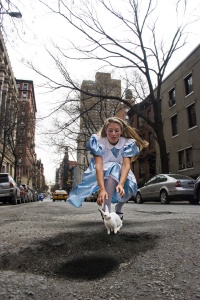