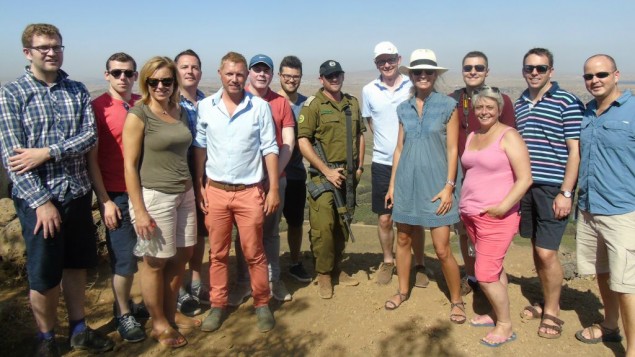 Scottish Tories on the Golan Heights

Early in 2016 Ruth Davidson persuaded the Holyrood debating agenda to arrange a formal invitation to the Jewish Lobby Group (Culture for Coexistence) and Britain’s deputy Israeli ambassador Eitan Na’eh to meet with MSP’s to debate and vote in support of a motion “against the Holyrood Palestinian, Boycott, Divest and Sanction campaign” tabled on their behalf by Jackson Carlaw, deputy leader of the party.

On 25 February 2016, Parliament debated the first ever pro-dialogue Israel motion in a year that saw a staggering total of 62 anti-Israel debates at Holyrood. It was attended by 30 MSPs and did not culminate in a vote but a show of hands indicated 17 MSP’s backed the motion.

That the Parliament acknowledges the recently published open letter signed by over 150 high-profile cultural and political figures in support of the aims of Culture for Coexistence, an independent UK network representing a cross-section from the cultural world;

“Notes that this open letter calls for an end to cultural boycotts of Israel and Israeli artists. Notes the views expressed in the letter in support of a two-state solution and the promotion of greater understanding, mutual acceptance and peace through cultural engagement.

Notes that one example of this cultural exchange took place in 2015 when the Israeli artist, Matan Ben-Cnaan, won first prize in the 2015 BP International Portrait Award and was given the opportunity to teach art to local school children at the opening of the exhibition at the National Portrait Gallery.

Hopes that, through groups such as the Centre for Scotland and Israel Relations, based in East Renfrewshire, similar educational and cultural programmes will take place in the coming months.

Notes the views expressed in the letter that “Cultural engagement builds bridges, nurtures freedom and positive movement for change. We wholly endorse encouraging such a powerful tool for change rather than boycotting its use”. 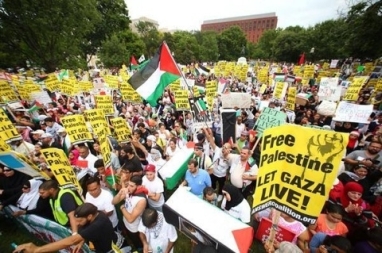 Jackson Carlaw, praised Israel’s contributions to international science and criticised campaigners who “overtly personally blame ‘the Jews’… over the actions of a foreign country”. Stressing the debate’s importance to the Jewish community in Scotland he said:

“I think this is a landmark day in the Scottish Parliament because we are able to host the first positive motion in support of Israel since the Parliament was founded in 1999.I think that it is important because it allowed us to actually show Israel in a much more rounded context and also to address the concerns of many who live here in Scotland within the Jewish community who have felt that the language of this parliament has been inadvertently hostile to Israel.”

Labour MSP’s and one Scottish Nationalist MSP criticised the “depressingly illiberal” tactics pursued by the anti-Israel lobby. A Green MSP, Alison Johnson claimed boycotts of Israel were “entirely consistent” with holding a “deep and unwavering commitment that none of us should ever downplay or forget the atrocities of the Holocaust”. 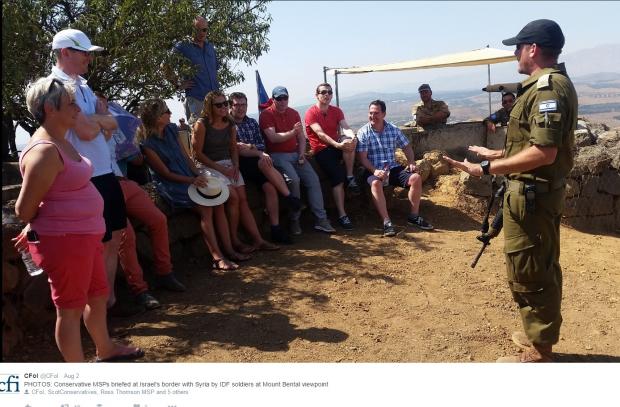 This is the life in the Golan Heights

A pro-Israel lobby group was approved at Holyrood in a bid to counter claims that MSPs are overly hostile to the state. Politicians from all parties, with the exception of the Scottish Greens, will be represented on the “Building Bridges with Israel” group, which aims to establish closer cultural, academic and economic links with the country. It has been set up in a bid to oppose anti-Semitism and offer an “alternative viewpoint” to what it says is a pro-Palestinian stance that has been dominant since the Scottish Parliament’s inception in 1999. The group will meet early in the New Year.

Jackson Carlaw, the Conservative MSP who will act as convenor of the group, said it was “sadly true” that there had been more anti-Israel motions at Holyrood than the other parliaments of the EU put together. He went on: “This is not going to be a group that will simply be an apologist for the government of Israel. This is not a group being set up with a view to having a row with anyone or being antagonistic. It’s genuinely there to seek to have bridges built between the Jewish community, Scotland and the state of Israel. Responding to vocal critics of Israel in Scotland, he added: “I regard Israel as the only democratic state in that region. I’m not a fundamentalist in relation to these issues, I think the more we have an ongoing dialogue and an opportunity for all sides to participate so much the better.” 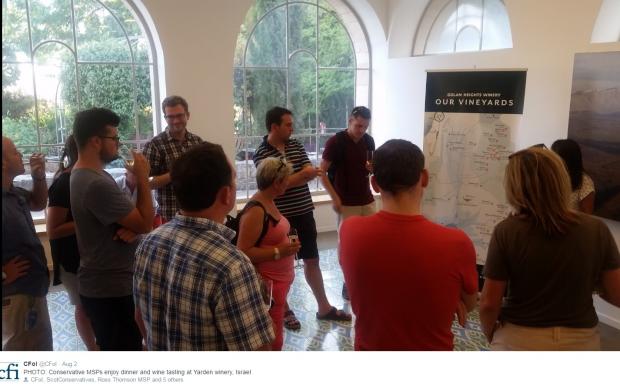 Cheese and Wine on the Golan Heights with the Scottish Tories

The UN, in 1981, issued a resolution saying that Israeli occupation of the Golan Heights was illegal. The strategic ridge was captured by Israel from Syria during the 1967 Six Day War and formally annexed in 1981. Since then, every year the UN passes a General Assembly resolution titled “The Occupied Syrian Golan” which reaffirms the illegality of the Israeli occupation and annexation.

The Israeli government disputes this position. Answering Al-Marsald’s concerns, a Scottish Conservatives spokesman said their position is the same as the UK government position which is “not to support illegal settlements”.

Al-Marsad, the only human rights organisation operating there, is at loggerheads with the Scottish parliamentary pro-Israel lobby group after raising concern about the group’s visit to the Golan Heights winery in Katzrin. They say the delegation did not contact Al-Marsad or other representatives of the Syrian community in the “occupied Syrian Golan” to get a “balanced view”. And they say they have repeatedly failed to get an explanation for the visit to the territory or any condemnation of the illegal settlement.

The group, which is described as an independent, not-for-profit international human rights organisation, said it was “highly concerned” that it sends the message that Scotland endorses the illegal activities of such settlements.

It was described by the Scottish parliamentary pro-Israel lobby group (CFI) as a trip to “promote bilateral trade between the two countries and bolster the growing pro-Israel advocacy movement in Scotland”.

The cross-party group, called ‘Building Bridges with Israel’. was set up in a bid to oppose anti-Semitism and offer an ‘alternative viewpoint’ to what it says is a pro-Palestinian stance that has been dominant since the Scottish Parliament’s inception in 1999.

James Gurd, director of the CFI, told the Jewish Chronicle that the trip, reflected a growing sympathy towards Israel north of the border saying: “For years a vocal minority seen as dominating debate there were very pro-Palestinian and anti-Israeli.” 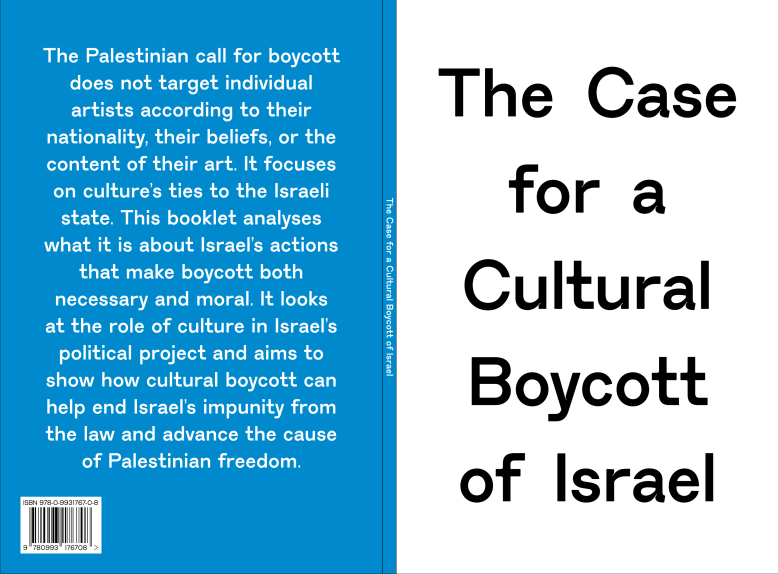 Dr Nizar Ayoub director, said “Given this lack of clarification, I am highly concerned that the Scottish parliamentary pro-Israel lobby group (Scottish Conservative party) appears to condone the construction and expansion of Israeli settlements – illegal under international law – in the occupied Syrian Golan.” He went on to say: “it is “highly concerning” if human rights issues, in particular, in the occupied territories should not be “not considered or trumped by business interests”.

I am highly concerned that the delegation has visited a winery in an illegal Israeli settlement without providing any explanation of the purpose of the visit. In effect, this sends a message that the Scottish parliamentary pro-Israel lobby group (Scottish Conservative party) endorses the illegal activities of this settlement – built on land illegally appropriated from its original Syrian owners.

Even more worrying is the fact that the Scottish parliamentary pro-Israel lobby group (Scottish Conservative party) has refused to answer questions about whether the delegation raised the broader issue of the expansion of illegal Israeli settlements in the occupied Syrian Golan during its visit.”

This would have ensured that the delegation obtained a more balanced view of the situation in the occupied Syrian Golan.” http://golan-marsad.org/

The data for September confirmed that on 31 July the MSPs were each given £2,000 by the group that supports business, social and security connections between the UK and Israel in the political arena. The monies paid for a trip to Israel by the MSPs.

The revelation comes in the light of the UK’s vote to leave the European Union, which has opened up debate over the future of the UK and Scotland’s trade relationships 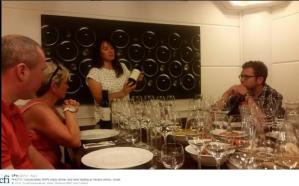 10 thoughts on “Davidson’s Small Troop of MSP’s Overturn 20 Years of Scottish Support for the Palestinians in Favour of Israel – Then Off they Go To The Golan Height’s (at whose Cost?) to Celebrate Their Victory”