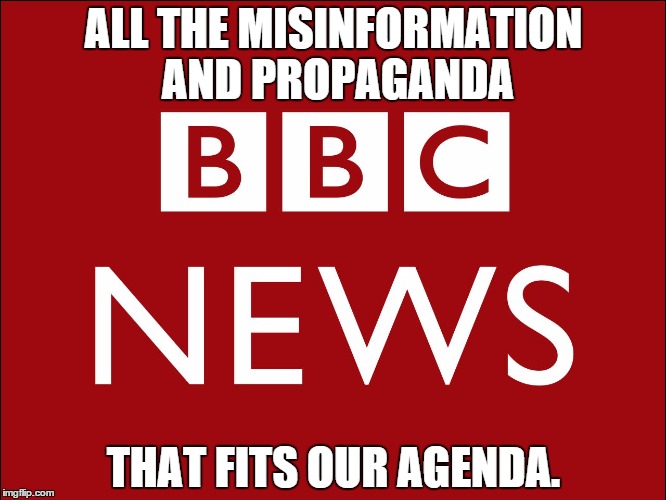 The BBC, Other Media Outlets and the Scottish Press

Black propaganda, authorised by the Westminster government,  is routinely used by the BBC, other media outlets and the Scottish Press to vilify, embarrass or misrepresent those in Scotland who support Scottish independence.

The coverage of political events in Scotland’s press and television is devastatingly fraudulent so far as unbiased reporting is concerned. This is primarily due to the right wing policies of their owners and the adverse impact of the companies that place their advertising with the various media outputs.

Without advertising revenue, or state funding in the case of the BBC and Channel 4 many newspapers and the BBC Channel 4 would very quickly fold.

The foregoing indisputable fact completely dismantles any concept of democracy in the UK and subjects Scots to a society ruled by financial oligopoly’s interested only in the furtherance of an insatiable greed determined to ensure an accumulation of wealth to themselves and those to whom they might have an obligation.

But the present unsatisfactory state of affairs was not always the way in which the press went about its business. In times past the press and the BBC were much admired because of the plurality of opinion they brought to the nation.

The coverage of daily newsworthy events was indeed superb and senior political journalists were placed highly in society due to their unbiased delivery of news matters and political comment.

No politician or political party was ever given a cosy slanted bedtime interview which is often the case nowadays. Perhaps the most factor was that Editorial output was never driven by an need to satisfy the Advertising Department.

Scotland, up to the late seventies enjoyed a media largely free of unfettered bias, although there was always a right and left wing political banter for the nation to enjoy each day.

The Times (the voice of the UK) was a newspaper considered to be above political persuasion committing only the truth to print. All other newspapers served their readership dependant on their political stance but journalists would always demand of their editors that their copy would be presented to the readership nearly always unaltered so that their words would be presented accurately.

The Impact of Thatcher and Murdoch

The demise of the British press started at around the time Margaret Thatcher and the ultra right wing Tory party took up the reigns of government.

She adored Ronald Reagan and embracing the ideals of the Americans forced change on UK society. Overnight large tracts of the population of England dumped the British way of life and embraced with an indecent haste the “dog eat dog” approach actively promoted by the Tory party.

Scotland rebuffed Thatcher and her drive to create a Kingdom full of “Gordon Greco’s” preferring to retain political systems driven by the desire to ensure communities would always be at the forefront of individual thought.

An example is The Blood Transfusion Service. In England and in Scotland the Services had, up to 1980 been self sufficient in the collection of blood from volunteers within the community. The bulk of companies placed their facilities at the disposal of the service free of charge and allowed staff to be away from work to give their donation.

Very quickly after the election of the Tory Party to power things changed in England. Employers became increasingly reluctant to release their staff and free use of facilities markedly dried up.

The Blood Transfusion Service in England & Wales failed to collect enough blood and the NHS in England was forced to import blood and blood products from abroad, primarily the US, (and the problems that brought with it) who collected much of their blood from paid donors. Just at the time the Aids epidemic hit the world.

Scotland remained self sufficient in blood and blood products until the md- 1990’s due to the retention of the community ideal, until this was overtaken by the spread of the Thatcher Dogma.

The introduction of the press baron, Rupert Murdoch, his British American Society cohorts, and the secret service agencies of the UK and the USA was akin to releasing Dracula on a blood bank.

He purchased a poorly performing Sun newspaper and converted it into a “slick chick” rag with an approach radically at odds with the mainline press in the UK.

He then followed up purchasing the News of the World, introducing “sex expose” headlines requiring access and financial persuasion of the protectors of society releasing information that would not normally have been in the public domain.

Not content he went on to purchase “The Times” and almost overnight destroyed its reputation for unbiased reporting of news and politics.

The final act of political vandalism supported by Thatcher was Murdoch’s destruction of “Fleet Street” which brought about the situation which is of relevance today.

Many newspapers followed Murdoch’s lead and went for American ownership and the US dollar. It is therefore the needs, foibles and vices of the US that are driving UK press policies today.

The search for the truth no longer occupy’s the thoughts and actions of News Editors. It has been replaced with a driving force of “media control” ensuring the public is provided with news copy heavily slanted in favour of the politics of the news Barons and whichever government holds the reins of power in Westminster and the US.

BBC senior management in Scotland, an anti-independence Scottish press and a UK body corporate are determined upon the elimination of anything Scottish in the mantra of the Scottish electorate support policies only wholly favourable to the Westminster government.

This was demonstrated at the time of the Scottish referendum by the much reduced role required of BBC Scotland, Scottish journalists and the very expensive transfer from England to BBC Scotland of (British American Society), right wing political presenters Sarah Smith and James Naughtie who in the course of their secondment contributed, by their performances in the course of the referendum coverage to the biased reporting against the Yes campaign.

Paul Mason: BBC Newsnight’s former economics editor who is now at Channel 4 News said  “Not since Iraq have I seen BBC News working at propaganda strength like this. So glad I’m out of there,”

On Twitter, he posted a link to a U-Tube video claiming that the BBC had been “completely biased and unbalanced in their reporting of the referendum”, adding the comment: “Media students, journos, (coughs loudly) this is well worth watching.”

In recent weeks appeasement policies in favour of the government were given a further boost with the controversial appointment of Laura Kuenssberg to the post of BBC Political Editor replacing Nick Robinson. Kuenssberg, whom I have written about in my blog:

.…………. is a right wing, lightweight, opinionated, increasingly nasty political interviewer who follows the lead of her mentor, Andrew Neil – the BBC’s other very senior political commentator who, by chance is a former Murdoch employee and current Chairman of Press Holdings (viz the Spectator and the Barclay Brothers).

So at the very top of the political journalism tree of the BBC there are two ultra right-wing journalists. Kuenssberg and Neil are also Scots, so the anti Scottish independence bias is assured through all aspects of the BBC’s political coverage.

17 February 2015: The naked power of HSBC – Why I have resigned from the Telegraph -Peter Oborne – former chief political commentator of the Telegraph

This brings me to a second and even more important point that bears not just on the fate of one newspaper but on public life as a whole. A free press is essential to a healthy democracy.

There is a purpose to journalism, and it is not just to entertain. It is not to pander to political power, big corporations and rich men. Newspapers have what amounts in the end to a constitutional duty to tell their readers the truth.

It is not only the Telegraph that is at fault here. The past few years have seen the rise of shadowy executives who determine what truths can and what truths can’t be conveyed across the mainstream media.

The criminality of News International newspapers during the phone hacking years was a particularly grotesque example of this wholly malign phenomenon. All the newspaper groups, bar the magnificent exception of the Guardian, maintained a culture of omerta around phone-hacking, even if (like the Telegraph) they had not themselves been involved.

One of the consequences of this conspiracy of silence was the appointment of Andy Coulson, who has since been jailed and now faces further charges of perjury, as director of communications in 10 Downing Street.

Last week I made another discovery. Three years ago the Telegraph investigations team—the same lot who carried out the superb MPs’ expenses investigation—received a tip off about accounts held with HSBC in Jersey.

Essentially this investigation was similar to the Panorama investigation into the Swiss banking arm of HSBC. After three months research the Telegraph resolved to publish. Six articles on this subject can now be found online, between 8 and 15 November 2012, although three are not available to view.

Thereafter no fresh reports appeared. Reporters were ordered to destroy all emails, reports and documents related to the HSBC investigation. I have now learnt, in a remarkable departure from normal practice, that at this stage lawyers for the Barclay brothers became closely involved. When I asked the Telegraph why the Barclay brothers were involved, it declined to comment.

This was the pivotal moment. From the start of 2013 onwards stories critical of HSBC were discouraged. HSBC suspended its advertising with the Telegraph. Its account, I have been told by an extremely well informed insider, was extremely valuable.

HSBC, as one former Telegraph executive told me, is “the advertiser you literally cannot afford to offend”. HSBC today refused to comment when I asked whether the bank’s decision to stop advertising with the Telegraph was connected in any way with the paper’s investigation into the Jersey accounts.

Winning back the HSBC advertising account became an urgent priority. It was eventually restored after approximately 12 months. Executives say that Murdoch MacLennan was determined not to allow any criticism of the international bank. “He would express concern about headlines even on minor stories,” says one former Telegraph journalist. “Anything that mentioned money-laundering was just banned, even though the bank was on a final warning from the US authorities. This interference was happening on an industrial scale.

“An editorial operation that is clearly influenced by advertising is classic appeasement. Once a very powerful body know they can exert influence they know they can come back and threaten you. It totally changes the relationship you have with them. You know that even if you are robust you won’t be supported and will be undermined.” When I sent detailed questions to the Telegraph about its connections with advertisers, the paper gave the following response. “Your questions are full of inaccuracies, and we do not therefore intend to respond to them. More generally, like any other business, we never comment on individual commercial relationships, but our policy is absolutely clear. We aim to provide all our commercial partners with a range of advertising solutions, but the distinction between advertising and our award-winning editorial operation has always been fundamental to our business. We utterly refute any allegation to the contrary.”

The evidence suggests otherwise, and the consequences of the Telegraph’s recent soft coverage of HSBC may have been profound. Would Her Majesty’s Revenue and Customs have been much more energetic in its own recent investigations into wide-scale tax avoidance, had the Telegraph continued to hold HSBC to account after its 2012 investigation? There are great issues here. They go to the heart of our democracy, and can no longer be ignored.