The venerable John Pilger wrote about the British American Project (BAP), an Anglo-American network set up by the Right in the US in 1983. Alumni include the arch strategist, Mr Powell, (he of Tony Blair infamy) and several New Labour ministers, Tory top boys, business leaders and powerful media people – Paxman, Evans and Naughtie among them. Many US Masters (and Mistresses) of the universe are also members.

Pilger’s view is that the BAP is modern-day freemasonry but without the silly rituals, dark secrets, and deep misogyny. It seeks to preserve the rapacious power and wealth of the Anglo-American alliance. It draws in future power merchants and trailblazers, and gets them to commit to nuclear weaponry and world domination. Journalist members keep guard and stop the public from finding out about the suspect club.

So here’s the story of how I got involved with BAP, what it was then, what is has since become, its influence, good and bad, and why I no longer attend the annual junkets. 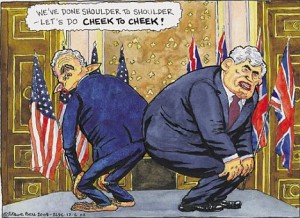 It was 1988 and I worked for the brilliant New Society magazine, my first proper media job, scary and exhilarating. I had come to journalism late.

An invitation arrived from Chatham House to a posh lunch, to possibly get to go to the US with other young Turks of this land. I must have eaten well enough with the baffling cutlery for I was among the chosen. A nobody like me, I thought, to join the somebodies. I was flattered.

It was off to St Louis, and oh my world, how posh was theirs! How we were dined and wined and how terribly hard it all was, and what a good thing I had gained entry, to go and put up a fight against the fat complacency of Reaganites and Thatcherites.

The neocons were then at the toddler stage, noisy but not yet fully formed. The British side was dominated by white men while the US ensured gender and race balance.

The debates were hard and mostly won by the Right from both sides. We argued about US arrogance, Israel, royalty and republicanism. There are some uplifting memories. An American delegate who looked like William Hurt was delightfully attentive and I brushed off a lecherous Thatcherite minister who invited me to be his mistress in exchange for the use of his Knightsbridge flat.

I attended six gatherings (I think) and was glad to, mainly because it gave me insights into the workings of power. Jonathan Powell, the silent operator, who stood and watched and said nothing unless it was privately to this general or that senator.

Vanessa Gilmore, a dynamic US judge from Texas, networked and intervened so efficiently it dwarfed us all. Police chiefs hobnobbing. And so on.

So why did I stop going? Because I became increasingly queasy about this special relationship, because of Iraq, because New Labour has, without public consultation, made the UK into a client state of the USA. 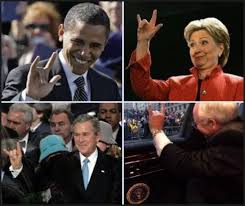