The Scottish Referendum – The “Let’s Stay Together” Celebrities Campaign

I am ambivalent about celebrities endorsing campaigns. They most definitely are entitled to an opinion and be free to voice their views openly and in public.

But without a definitive knowledge of the cause to which they subscribe there is no compelling reason to be influenced by their views over anyone else.

The campaign evolved through meetings with influential members of the, “Chipping Norton Set” and was funded by persons at the very top of the Tory Party and/or their supporters.

Celebrities, (so called), responded, with gusto to the, “call to arms” from media movers and shakers at their peril. And I expect more than a few titles were gained at the expense of the Scottish electorate.

Dan and his father Peter Snow

Dan Snow – High profile on the BBC – Fronted the campaign

Son of former BBC election night star Peter Snow, Dan was hired to be the public face of the campaign, (as he has previously for other high profile campaigns.). He is married to the fabulously wealthy Duke of Westminster’s daughter, Lady Edwina.

Their families enjoy the friendship of the five richest families in the UK, whose combined wealth is in excess of the total wealth of 20% of the population of the entire UK.

In a recent BBC1 about WW1, (which he produced and presented) there is a hint to his warped view of the world.

He said, “Many soldiers enjoyed WW1. If they were lucky they would avoid a big offensive, and much of the time, conditions might be better than at home. For the British there was meat every day – a rare luxury back home – cigarettes, tea and rum, part of a daily diet of over 4,000 calories.

Absentee rates due to sickness, an important barometer of a unit’s morale were, remarkably, hardly above peacetime rates. Many young men enjoyed the guaranteed pay, the intense comradeship, the responsibility and a much greater sexual freedom than in peacetime Britain”.

His great great-grandfather was David Lloyd George, British Prime Minister from 1916 until 1922. And his great grandfather was Sir Thomas D’Oyly Snow, one of the generals who planned and executed the battle of the Somme. On just the first day at the battle, 1 July 1916, the army suffered over 57,000 casualties, including more 19,000 dead. Even Snow admitted, “That is the darkest day in British military history, arguably British history, and my great-grandpa was one of the key guys in the planning and execution of that attack”

As well as being part of a TV dynasty second only to the Dimblebys, Snow has a deeply personal connection with the elite responsible for the disasters of the First World War.

Now none of us are responsible for the mistakes of our ancestors, but we can seek to learn from them and not to justify them. But Snow has chosen justification, in spite of the fact that his great grandfather’s account of his experience directly contradicts his defence of the war.

Dan Snow describes Thomas D’Oyly Snow as, “a hardened enforcer for the Queen Empress Victoria”. And indeed he was. “He fought Zulus in South Africa and the Mahdi in Sudan, where he carried a bottle of champagne with him to Khartoum and drank it when his troops had avenged the death of General Gordon, who was killed fighting the Mahdi’s warriors in 1885…On the eve of war he was commanding the 4th Division in Britain, assimilating the lessons of the 1899-1902 Boer War for the possibility of war in Europe”.

In the current debate Dan Snow has made a great play of the fact that the, “lions led by donkeys” interpretation of the war is false. Today he insists that the Generals were at the forefront of military innovation.

But when it comes to assessing his ancestor’s exploits it’s a different story. Indeed Sir Thomas D’Oyly Snow saw the war first hand and in very different terms to young Snow.

Sir Thomas D’Oyly wrote, “The higher staffs had had no practice in command, and although they had been well trained in the theory of the writing and issue of orders, they failed in the practice…Added to this we all suffered from the fault common to all Englishmen, a fault we did not know we suffered from till war revealed it, a total lack of imagination”.

It was 2008 when Dan Snow discovered this family history and 2011 when he wrote about it. Back then he thought his great grandfather was, “deeply critical of himself and others, from the inexperience of the British gunners to the shortage of ammunition”.

Churchill refused to re-supply artillery shells to the front claiming there was no money available. In defence of Sir Thomas, Dan Snow wrote, “The revolution in firepower had given the defending side the ability to bring a wall of steel and explosives down on anyone brave enough to attack.

In 1919, under Churchill, by now Secretary of State for Air and War, tanks and an estimated 10,000 troops were deployed to Glasgow during a period of widespread strikes and civil unrest amid fear of a Bolshevist revolt.

Radio was in its infancy. Telephone cables were severed, messengers were picked off by snipers armed with rifles of hitherto undreamed of power and accuracy. Thousands of miles of newly invented barbed wire posed an intractable problem”.

Sir Thomas recorded; ‘We lost several men on the first night, drowned or smothered. The men had either to stand in water, knee deep, with every prospect of sinking in deeper still, or hang on the side of the trench.

Later in the war we should have overcome the difficulty but at this time the men were overworked in keeping the front trenches in order, and we were all inexperienced.

On one occasion one of my staff said to a Corporal of the Engineers, “Now you are an engineer; cannot you devise some method of draining this trench?” to which he replied, “I am afraid, Sir, that I cannot; you see before the war I was a Christmas card maker by trade.”’

And the high command did nothing to help: ‘We were not provided with wood wherewith to make trench-boards, and no extra socks or waterproof boots were forthcoming. We were only censured for having so many sick.’

Dan Snow says that the General’s memoirs finish before, “his darkest days of the war”. At the Somme Sir Thomas’ men, “attacked the strongest stretch of German line as a diversion for the main assault, which went in to the south. Even by the standards of that bloody and futile day, the attack of Snow’s VII Corps was a disaster.”

But Sir Thomas D’Olyly Snow was at a château, not the front. Even Dan Snow admits that when he went to the chateau, “It feels a long way from the carnage of the trenches”.

Worse still, it appears Snow attempted to shift the blame away from himself, writing to his seniors, “I regret to have to report that the 46th Division in yesterday’s operations showed a lack of offensive spirit.”

This was after the men had fought their way through unbroken barbed wire. Then, once they did manage to get into the German trench system, they held off counter-attacks until they had run out of ammunition and were forced to use shovels and their bare hands.” It was says Dan Snow of Sir Thomas, “an inexcusable attempt to shift the blame”. 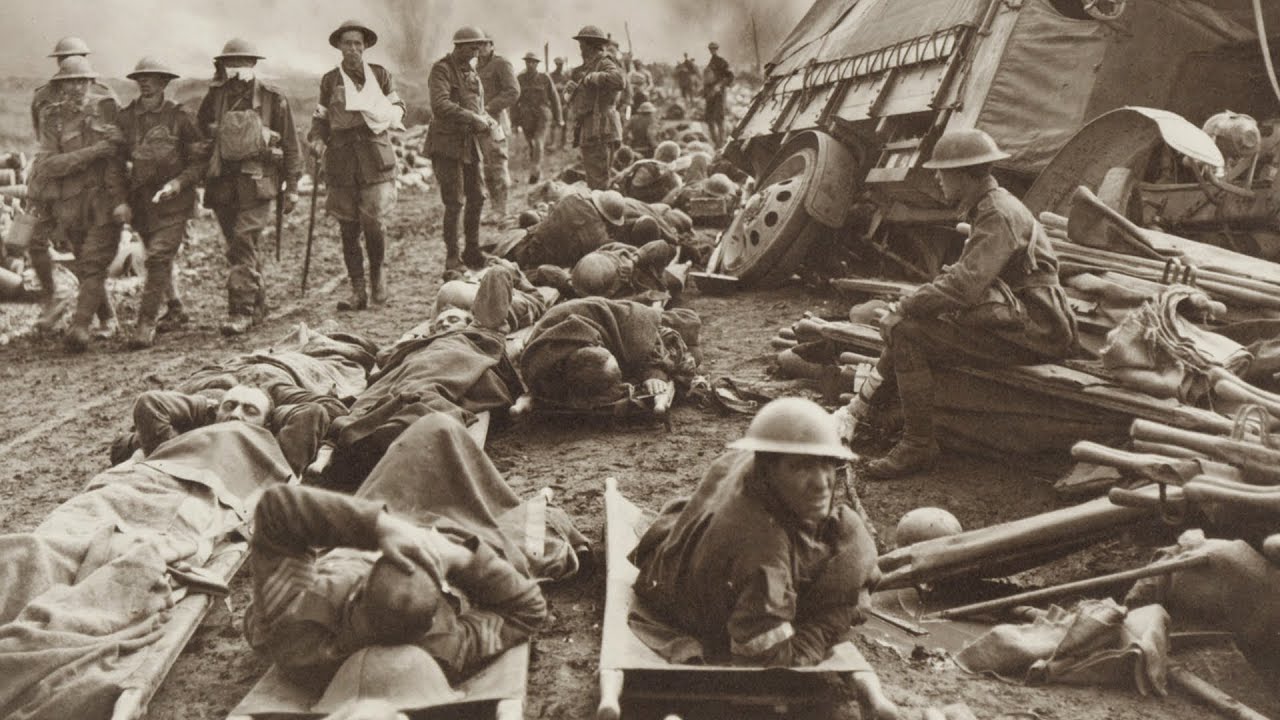 Does all this really sound like Dan Snow’s recent claim, “Many soldiers enjoyed WW1. If they were lucky they would avoid a big offensive, and much of the time, conditions might be better than at home. For the British there was meat every day – a rare luxury back home – cigarettes, tea and rum, part of a daily diet of over 4,000 calories.

Absentee rates due to sickness, an important barometer of a unit’s morale were, remarkably, hardly above peacetime rates. Many young men enjoyed the guaranteed pay, the intense comradeship, the responsibility and a much greater sexual freedom than in peacetime Britain’.

Doesn’t it sound rather like the myths that the Dan Snow of 2014 is trying to dismiss. Are there not here poorly trained troops, unsupported by the high command? Do the generals not seem to know what they are doing? Are they not versed in colonial warfare but unprepared for an industrialised total war? Are they in the château’s and not the trenches? Are they trying to shift the blame for failure onto others?

If we want to know about the realities of the First World War it would seem the old imperial warrior is a better guide than his historian great grandson.

Thanks very much for this, Boris. Sadly, nothing you have said is a surprise. For a Scottish perspective from an old Cameronian, I append the following. Glad it’s free on the web because some folk on Amazon advertise this at £50+ a pop! Mine cost me £5.50 from a Glasgow bookshop.

So much reading but I am looking forward to it.

I would say enjoy, but we both know it’s not going to be that kind of story, sadly.

Some good footnotes, and worth following up.

I lost 5 great-Uncles in WW1. When I was young the family still discussed them as though they were still with us. My family felt betrayed since there was only a single gravestone for Uncle Johnny aged 18y. Nothing for the other 4.

That is a grim statistic. My two great aunts were still wearing widows’-weeds in the Seventies: both their husbands died within a few days at Loos so I’m afraid glib apologists for this slaughter (like Snow) really get my goat.

All those senseless deaths simply entrenched the position of the Establishment, who were never held accountable for their blundering prosecution of a pointless war.

I’m still waiting for a Land fit for Heroes……

So many Scots were wounded and died supporting English imperialism