Heed the Words of William Hague and Craig Murray

Prior to the 1997 referendum William Hague voiced the official position of a UK government was to retain a right to reverse any or all aspects of power that might be devolved to a Scottish parliament.

The Scottish nation should heed the warnings of history, a , “no” vote in the forthcoming referendum would send a resounding message to Westminster that Scotland wished to embrace all, “National” aspects of UK government policy.

This would lead to a creeping reverse of, “devolution” in respect of a number of powers at odds with and giving difficulty to a Westminster government.

Powers There will be no more Powers

So much for Gordon Brown and his new set of devolved powers, details of which only Gordon knows.

What we do know is that there is absolutely no chance of anything more being devolved.

The reverse is the future if Scotland votes no.

A Scotland capable of challenging the Status Quo will not be allowed to remain a threat.

Scotland will be neutered, powers removed and other methods of control introduced.

Anything and everything that exuded power was removed from Scotland and transferred to England.

Scotland was well and truly sorted.

Thatcher did what Westminster excels at subjugation. 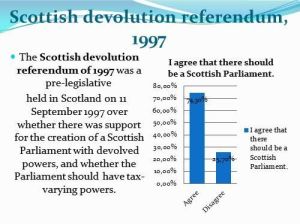 So, here we are again; echoing a well loved figure from the past Robert Bruce who said to the Scot’s at Bannockburn, “Do you want to be free to decide your own future and that of your children, OR are you content to remain subjects of a political system that is corrupt and bloated with money stripped from your purses, leaving you at the mercy of, “Wonga” money lenders and wholly reliant on food banks to feed your children and yourselves”?

Remember this. Devolution was not given freely to Scotland in 1997. Westminster was instructed to decentralize government as a condition of membership of the EU.

Even then it took Westminster MP’s, (including those Scotland sent to London to fight their corner) 20 years to comply with the European Commission.

They fought tooth and nail to protect what they believed was theirs.

Even then devolution was designed, organized and implemented in such a way as to ensure, through a hybrid, “hotch potch” electoral voting system of proportional representation that the Scottish National Party would never be able to have an overall majority in the new Scottish parliament.

So Westminster cooked the books, yet again so as to ensure continued dominance over Scotland. Thatchers Legacy lived on.

But the civil servant’s and their masters got their figures wrong, (seems to be a bad habit picked up and absorbed by Westminster).

The Scottish National Party turned devolution on it’s ugly head and here we are again.

This time I urge Scot’s not to believe anything Westminster politicians say in defence of retaining the status quo.

They will lie, threaten and in any other way seek to cajole our nation. Love bombing, hate bombing, promises, promises, everything the Westminster elite has in it’s formidable armoury will be used against Scotland all with the single purpose of continued subjugation.

If Scotland blinks next week and succumbing to the subterfuge elects to stay with the Union then shades of Thatcher you ain’t seen nuthin’ yet.

Over time, any remaining asset of any economic strength e.g. banking will be removed from Scotland.

Delegated powers will be stripped away and taken back to Westminster e.g. Health, Energy policy, Planning, Welfare.

Holyrood will become a wee talking shop filled with a bunch of nobody’s.

Scotland has a choice a, “Yes” vote will transfer power back to the Scot’s, (not just to Scotland).

We will then be enabled as is our right as a nation, once more to decide for ourselves the nature, policies and governance we wish to be in place.

“Welcome to your gory bed or to victory”