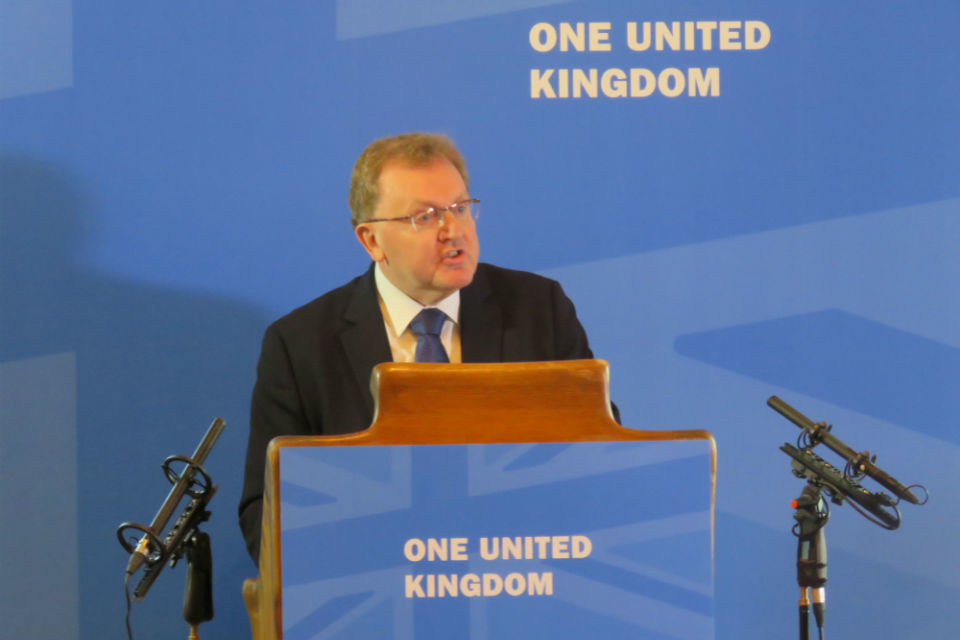 10 Sep 2020: Reported in today’s “National” – Councillors in Shetland have passed a motion to explore options for “achieving political and financial self-determination”.

Leader of the council Steven Coutts proposed the motion, which was carried yesterday by 18 to 2 votes. The motion states there is concern that centralised decision-making “is seriously threatening the prosperity, and sustainability, of Shetland as a community”.

Unionist commentators and politicians leapt onto news of the motion, with Highlands and Islands Tory MSP Jamie Halcro Johnston saying it was “no wonder islanders have run out patience” with Holyrood.

He commented: “I believe it’s right that both of our governments work with the islands to help meet the aspirations and unique needs of their people. However, it is clear that the current arrangements, where so much power is centralised in Edinburgh and the needs of Shetland often ignored, is some distance from where Shetlanders want to be.”

Ahead of the 2014 independence referendum, there were reports the islands could become self-governing like the Isle of Man if the rest of Scotland voted Yes while they backed staying in the Union.

LibDem MP Alistair Carmichael said in that situation a “conversation about Shetland’s position and the options that might be open to it” could start.

The report might be dismissed as being not particularly interesting but taken with recent news about the intention of the UK Government it is entirely relevant in today’s politics in Scotland and possibly signals a start of a process bringing about the reduction of the devolved powers of the Scottish Government. And there is good reason to be concerned. I reviewed and compiled (see below) a record of political events, from 2014 to date, pertaining to the governance of the isles. 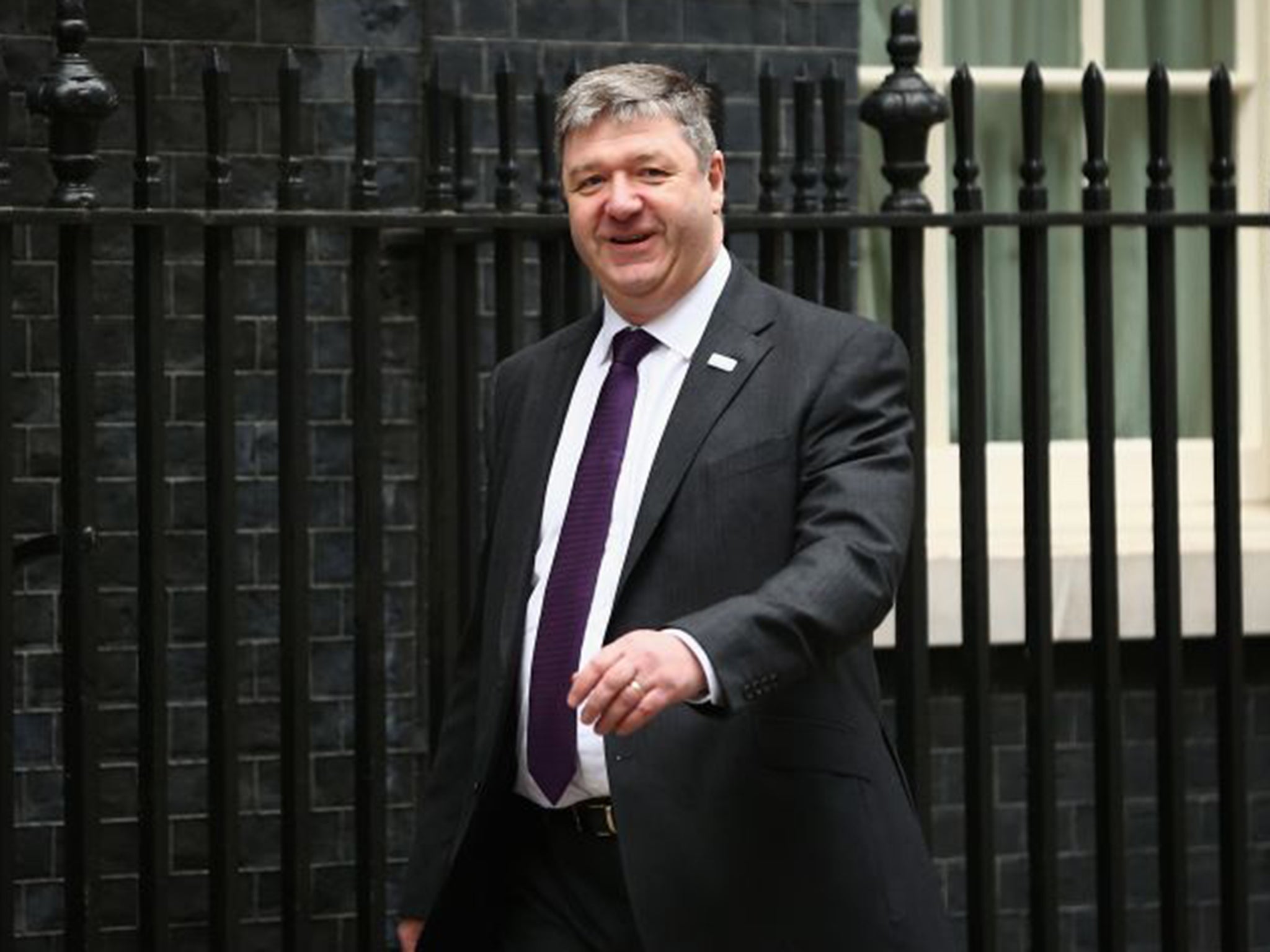 In the early months of the 2014 independence referendum campaign as the balance of probability switched from “no” to “yes” the Lib/Dems were forced to step away from their leading role in the mainland campaign by the other two Unionist Party’s.

The Lib/Dems retained their leadership role campaigning for a “no” vote in the Scottish Isles and formed three Unionist supporting campaign groups. “Our Islands Our Future”, “For Argyll” and “Wir Shetland”.

Tavish Scott, one-time leader of the Liberal Democrats in Scotland and then MSP for Orkney and Shetland, called on the islands to loosen their ties with Scotland. Saying he was in favour of the islands forming a crown dependency in their own right, with a similar status to the Isle of Man or the Channel Islands.

The Unionist Party’s echoed and added support to Scott’s views and dropped a spoiler into the mix offering specific guarantees to the Islanders should they vote “no”. 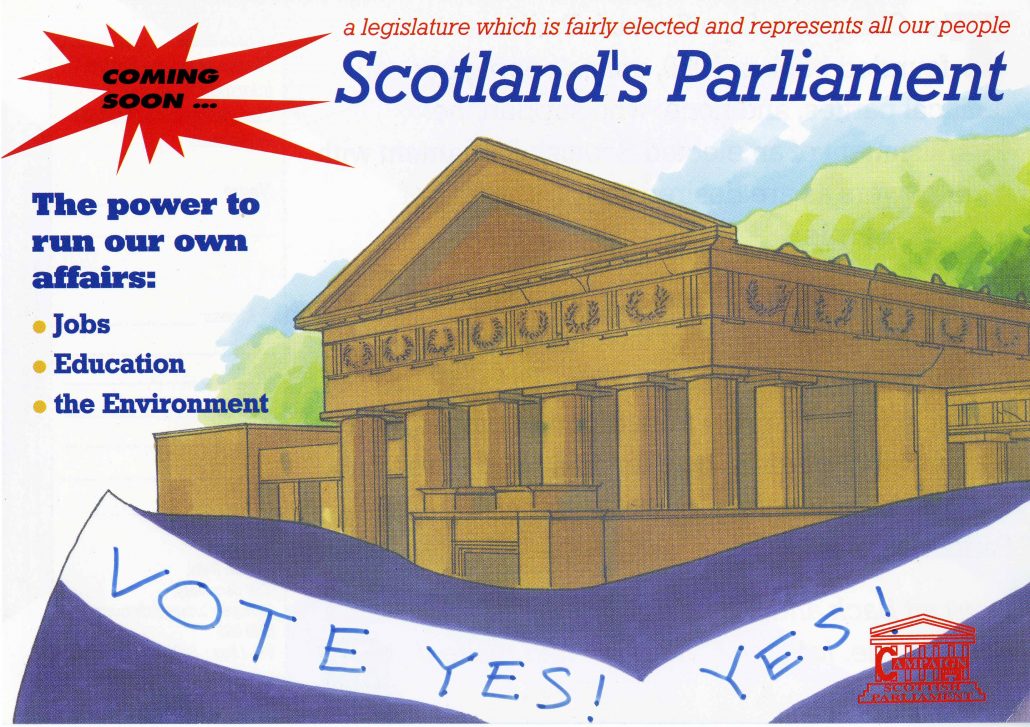 The New Deal for the Isles

the legislation would be put in place ensuring the account of island priorities. The UK Government in Scotland would appoint an islands representative dedicated to supporting the isles together with an oil and gas islands forum which would assist decision-making in the sector.

Renewable energy transmission links would be built linking the Isles to the mainland and island-specific challenges for transport, postal services, digital connectivity and fuel poverty would receive closer consideration, and measures would be taken to strengthen the transparency and accountability of the Crown Estate, which manages Scotland’s seas and foreshore.

Scottish Secretary Alistair Carmichael said the proposals would “strengthen the voice of our islands at the heart of the UK government”. Adding: “It will mean their unique needs are considered across all UK government activity and legislation, tailoring our approach to ensure islands issues continue to get the attention they require. That is good news for the councils of the isles and will improve the economy, connectivity and lives of our people on our islands. It shows we are not only listening but acting – and in doing so we are strengthening the UK.” 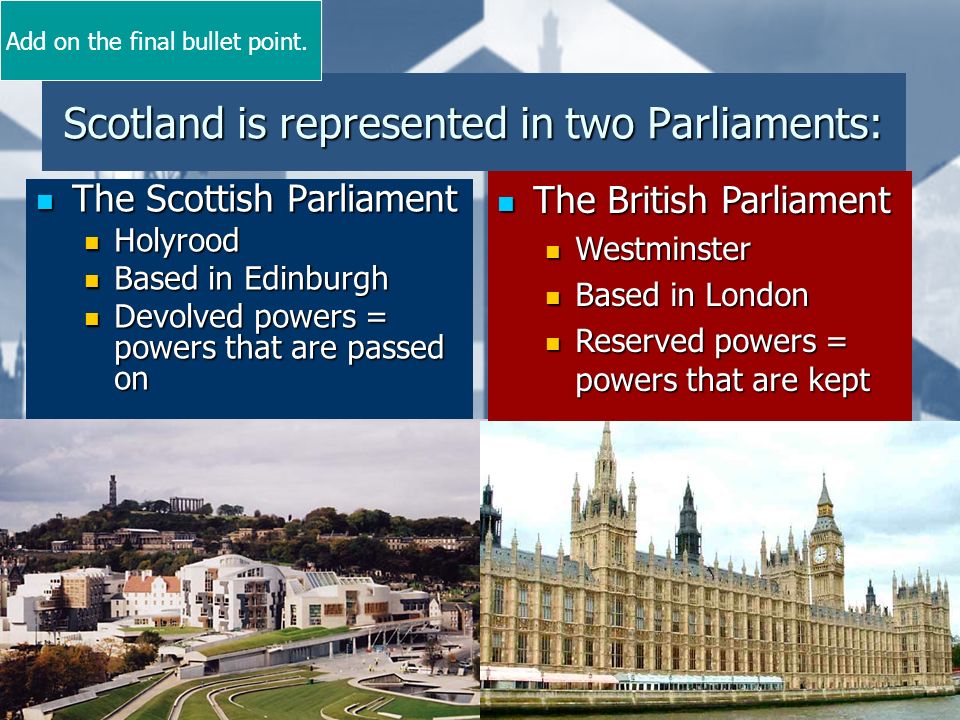 The Future Governance of the Scottish Isles

Three weeks before the referendum the Unionists published their “Framework for the Islands” with the claim that it would embed the voice of the island at the heart of the UK Government reflecting the priorities of their communities more closely in decision making and policy.

It would provide the basis for joint working between the UK Government and Shetland, Orkney and the Western Isles on a range of priorities and included a 10 point plan for the islands:

* Islands proofing: Including new arrangements to scrutinise UK Government policy and legislation to ensure they take account of islands priorities.

* Economic benefits: A new Islands Working Group supported by a dedicated position in the UK Government offices in Edinburgh with its agenda set by the islands, covering priorities like Islands Innovation Zones, construction costs and community benefit.

* A new Oil and Gas Islands forum: The UK Government will commit to working with the Islands Councils assisting strategic decision-making on future priorities for the oil and gas industry. This will allow the councils to work more closely with the UK Government and industry.

* Renewable energy: There will be a firm UK Government commitment to the “Renewable Energy Delivery Forum”, focussed on getting transmission links to the islands. The UK Government also shared the 3 Islands Councils’ ambitions for the deployment of renewable energy and for research and development activity, and we will ensure that obstacles to securing the necessary infrastructure are tackled effectively.

* The framework recognised the island groups faced particular challenges in the areas of transport, postal services, digital connectivity and fuel poverty. The UK Government will work with the councils on these areas.

* Transport: This includes seeking an extension to the Air Discount Scheme and a commitment to consider fiscal measures to support transport connectivity with the island groups.

* Postal services: The UK Government will work with retailers, consumer groups and enforcers to ensure parcel delivery charges to remote regions are fair and transparent, in line with the UK statement of principles for parcel deliveries.

* Connectivity: Digital connectivity is of great importance to local inhabitants and businesses on the islands and the UK Government will fund the “Mobile Infrastructure Project”, working to provide improved mobile coverage throughout the isles, aiming to address market failures in these areas. There will be a guarantee of parity in the minimum service level between the UK mainland and islands areas achieved by the delivery of superfast broadband to all premises in Orkney, Shetland and the Western Isles.

* Crown Estate: measures will be taken to strengthen the transparency and accountability of the Crown Estate.

* There will be increased island representation on UK government bodies and a dedicated point of contact to offer advice and guidance to the islands.

Selling his vision of the future to the islanders, Carmichael said:

“Today’s announcement is a landmark for the relationship between the UK Government and OUR island communities in Scotland. It builds on a great deal of good work in the past and will strengthen the voice of our islands at the heart of the UK government. It will mean their unique needs are considered across all UK Government activity and legislation, tailoring our approach to ensure islands issues continue to get the attention they require. That is good news for the councils and for the whole of the UK and will improve the economy, connectivity and lives of people on our islands. It shows we are not only listening but acting and in doing so we are strengthening the Isles and their place in the UK. This is the start of the next part of our journey together, giving us a strong framework which will be reviewed and built on further in the future.

The Leaders of Scotland’s three Islands Councils have welcomed the findings of the Smith Commission as a major landmark for the “Our Islands Our Future” campaign. The Commission was set up following the Referendum. Its recommendations formed the basis of legislation on more powers for Scotland and the 3 Isles. In his report, Lord Smith said:

“There is a strong desire to see the principle of devolution extended further, with the transfer of powers from Holyrood to local communities. The Scottish Government should work with the UK Parliament, civic Scotland and local authorities to set out ways in which local areas can benefit from the powers of the Scottish Parliament.”

“Following this transfer, responsibility for the management of those assets will be further devolved to local authority areas such as Orkney, Shetland, Na h-Eilean Siar.” 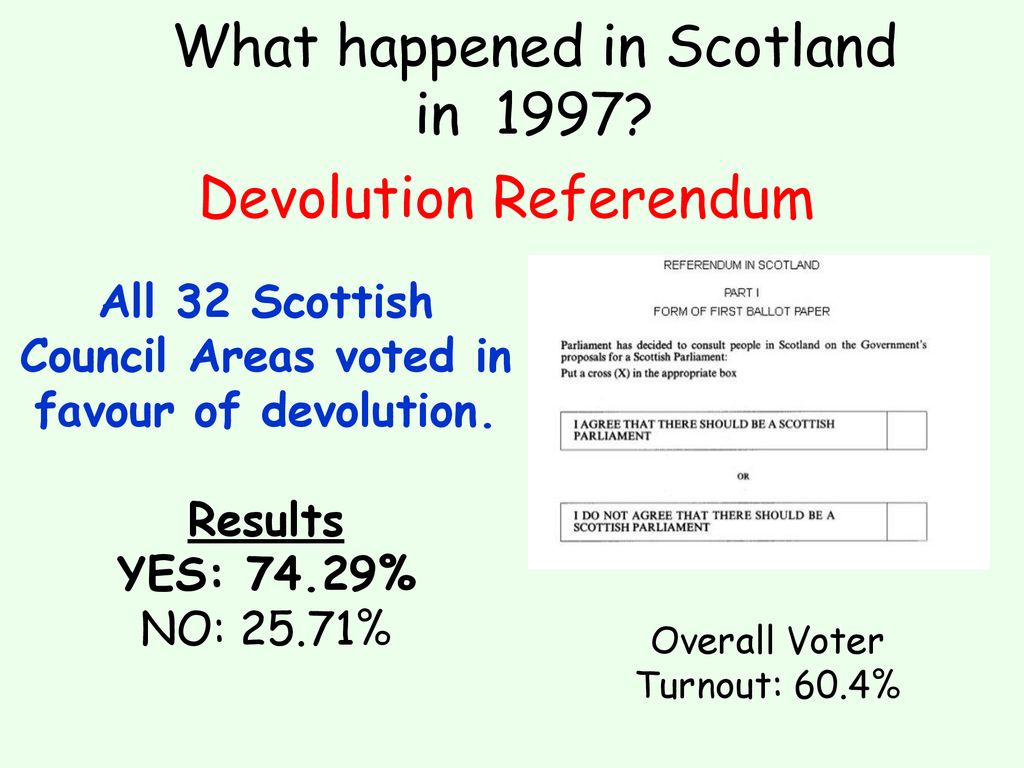 Steeled the “No” vote majority and backed by the Unionist Government in Westminster the Scottish Secretary (Mundell) saw no reason to maintain a low key approach to implementation of his plans for the future governance of the isles and any masking of his activities was abandoned in the knowledge that the Westminster government had taken charge of the agenda to the exclusion of the Scottish Government.

Mundell attended a meeting with the “Islands Working Group” attended by each of the islands leaders and other persons closely involved in the campaign taking forward the commitments detailed in the Islands Framework and confirmed the UK Government’s unqualified commitment to the major decentralisation in decision making across Scotland. He said:

“I confirm my on-going commitment to the Islands framework, placing power in the hands of communities making sure opportunity and prosperity reach every part of the United Kingdom. It shows how the Western Isles coming together with Orkney and Shetland has created an example for other parts of Scotland to follow. I’m keen for the Islands Councils to play a full part in the on-going debate on how the substantial powers in the Scotland Bill are used to directly benefit island communities. Over the past few years there has been a process of centralisation from the Scottish Government but taking forward legislation such as the devolution of management over the Crown Estate, this is an imbalance that will be redressed.”

“Hopefully Mr Mundell has become a belated convert to decentralisation. If he had listened when I put this forward at the last Scotland Bill in 2011 we would be a lot further forward. He opposed moves for decentralisation and resisted a push to devolve the Crown Estate to Scotland. His position on this issue has now changed due to the strength Scotland has with the SNP making Tory Westminster listen a little more. I hope Mundell will see for himself during his visit to the islands what real benefits could come from more decentralisation of powers from London and that he will, from now on, be supporting me in fighting to ensure the islands voice is heard at Westminster.”

Mundell called for a debate on what new powers Scottish local government should be given by Holyrood in order to take greater control over their own affairs, saying:

“The issue of devolution to local communities is now an urgent one for Scotland. There is a revolution going on in local government across the rest of the United Kingdom, with local areas regaining power and responsibility at an unprecedented rate. Scotland cannot afford to be left behind as the rest of the UK revolutionises how it governs itself, giving towns, cities and counties more of the autonomy which our international competitors enjoy. It’s time we had a proper debate about devolution within Scotland. Councils need to make their voices heard on what powers and responsibilities they want to have to shape their futures. Devolution is not worthy of the name if it stops at the gates of Holyrood. It has been argued by some that the UK Government should legislate to devolve these and other things directly to Scotland’s local authorities: so-called ‘double devolution’. That is the right intention, but the wrong approach. The Scottish Parliament and Scottish Government are responsible for local government in Scotland and it is their responsibility to drive that devolution onwards.”

Mundell’s views not supported by this UK Government. who intend to introduce Double Devolution with a vengeance. 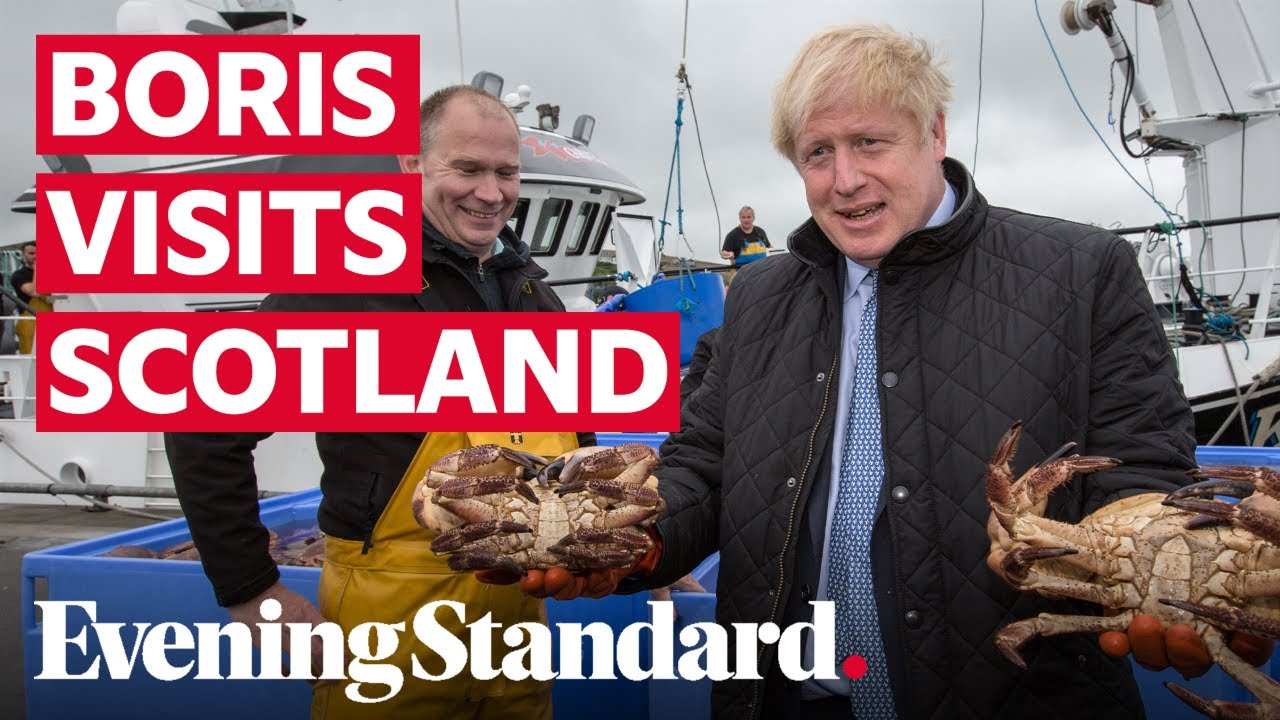