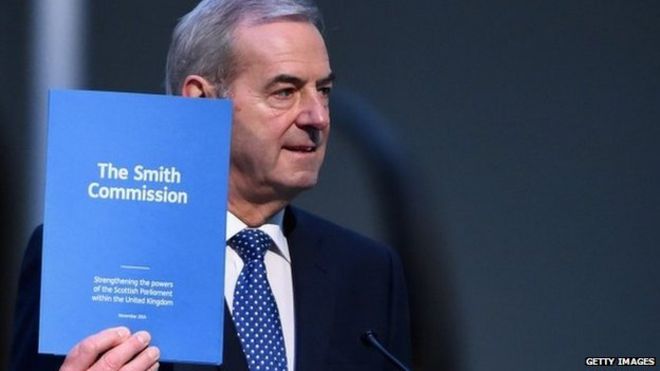 New powers were formally committed to in the heavily promoted Unionist “Vow” made in the last few days before the 2014 independence referendum.

The Smith Commission Panel subsequently agreed to a full devolution of abortion law, the creation of a separate Scottish Health & Safety Executive, lotteries, asylum and a much greater say in the governance of the BBC.

Devolution of income tax personal allowances, bands and rates, employers’ National Insurance contributions, inheritance tax, the power to create new taxes without Treasury approval and a raft of other taxes were also agreed.

But all of the foregoing changes were axed, in the final day, at the instigation of Unionist parties, without explanation. 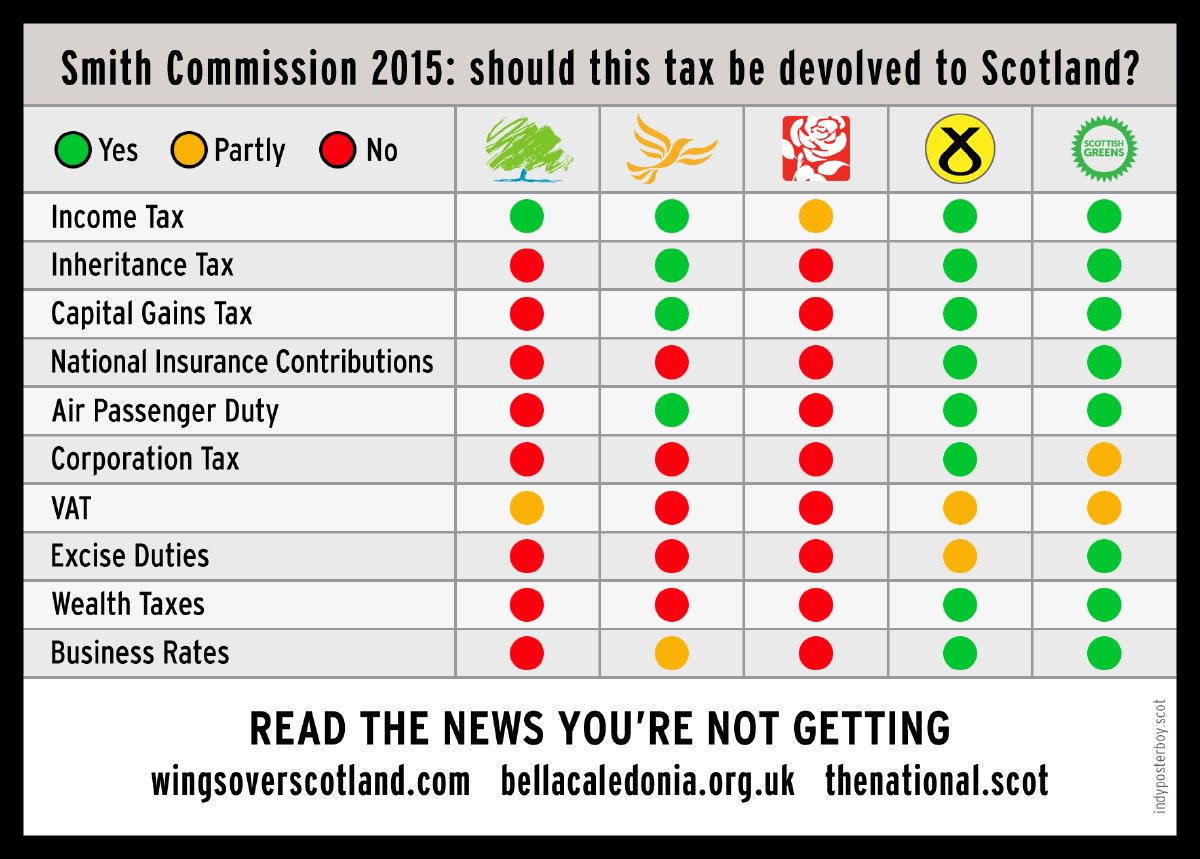 There were nine cross-party meetings over seven weeks prior to the publication of a agreed draft of “Heads of Agreement” proposals on 21 November 2014.

It was later confirmed that Commission panel members of Unionist persuasion, MSP members of political parties incorporated in Scotland and allegedly independent of Westminster were frequently on the phone taking instructions from their UK party leaders in London, with the LibDems and Tories particularly exercised about welfare proposals and Labour more focused on tax.

The Commission chairman, Lord Smith of Kelvin, also gave impression he added weight to the views of the three main Westminster parties over panel members.

A source said: “The position that Lord Smith took was that if the parties who were either in the current UK government or might be in the next refused to budge on something, he went with it. The Unionist votes counted for more.”

The BBC inadvertently revealed that the draft version of the agreement included late proposals submitted by the Scottish lib/Dem leader, to devolve power to vary Universal Credit a key plank of the Westminster Coalition government welfare reform. But the commitment to permit the Scottish government to vary its components were dropped after the UK Cabinet was informed.

The decision to devolve abortion policy had been agreed on a 4-1 basis, with only Labour opposed to it. In the draft version of the report dated 11.15am on November 26 – the final day of negotiations – stated: “Powers over abortion will be devolved to the Scottish Parliament.” But throughout that same day, Labour kept pushing its opposition in one-to-one meetings with Lord Smith, who then raised it again with the other parties. The Tory members then sided with Labour and the commitment to devolve abortion was removed.

The draft also stated: “Power to establish a separate Scottish Health & Safety Executive to set enforcement priorities, goals and objectives in Scotland will be devolved to the Scottish Parliament. The body would be required to operate within the reserved UK health & safety framework but would assess, set and achieve the health and safety objectives of most relevance and importance to Scotland.”

The policy, long supported by Labour and the trade union movement in Scotland was struck out and relegated to the “additional issues” annex of the final report, which said the Scottish and UK governments should merely “consider” changes.

Also included was an agreement that: “The power to permit the creation and regulation of new lotteries in Scotland will be devolved to the Scottish Parliament.”

But the final report devolved only the power to “prevent the proliferation” of highly addictive gaming machines known as fixed-odds betting terminals.

Also missing from the final draft was a statement that had said: “There will be greater Scottish involvement in BBC governance beyond the current right to have one Trust member and the current Audience Council Scotland.”

And a year later

“One year ago today, to the day, the Prime Minister made a “Vow” to the people of Scotland. Promises were made to deliver Home Rule and as-near-to-federalism-as-possible.

However, former Prime Minister Gordon Brown now says that the UK Government is, and I quote, “falling short on the delivery of the recommendations of the Smith Commission on Scottish devolution”. When will the Prime Minister deliver on the promises that he made to the people of Scotland? Briggs, Tory (list) MSP says he has been through a “living hell” after being cleared of sexual harassment following a party disciplinary hearing into the claims. He insisted that the accusations made by a female worker with another party were “completely false.”

It had initially been proposed that Briggs would be able to “cross-examine” the complainant’s version of events, although the Tories agreed to drop this. In written submissions, two witnesses backed the complainant and said Briggs had, “wrapped himself around her” and was “playing with her hair” and that she had looked extremely uncomfortable. In an interview shortly after the complainant said she was appalled that Briggs could be exonerated without evidence from her and two witnesses to the alleged harassment being heard.

In particular, she objected to the “adversarial” approach under which she and her witnesses were to undergo “cross-examination”.

Rape Crisis Scotland had called for the process to be more of a fact-finding exercise similar to that now adopted by the Scottish Parliament but says the Scottish Conservatives refused to back down.

She claims before she sent the letter, she met party director Lord Mark McInnes to seek reassurance and was told she would be protected and Briggs would be suspended pending a hearing. This never happened.

“No-one asked us to provide witness statements – Rape Crisis Scotland had to say to them, don’t you want them? And no-one kept in touch about the progress of the case – we heard very little until a week and a half ago when Rape Crisis Scotland was told I would have to submit to direct questioning by Briggs.”

“I am gutted that Briggs has been found to have done nothing wrong. I am sad and angry that the process was so terrible that it felt as though this end result was written from very early on. My question is how is anyone on that committee is qualified to judge my credibility, it’s not a court. These last few days have been terrible. If this had been dealt with well, I would not have gone to the press.”