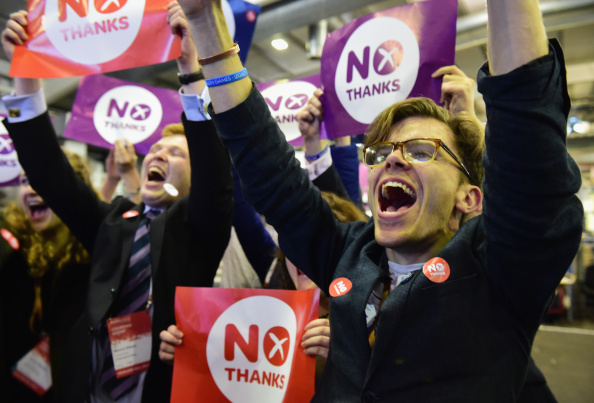 In the Scottish Independence referendum, the voter list included anyone entered on the current electoral roll, over the age of 16,, whose place of residence was in Scotland, regardless of nationality. The usual caveats about Service personnel also applied.

There is an acceptance within Scotland that a majority of the 240,000 EU and non-EU immigrant voters and many voters of Scottish birth and residence had been persuaded to vote “no” frightened into submission by an incessant campaign of disinformation orchestrated by the UK Civil Service, Westminster politicians, the UK government and opposition Party’s,  the BBC and all other media outlets and their organs of abuse of Scots in the guise of serving Scotland.

Indeed not long after the referendum Unionists “screamed from the rooftops” fighting each other for media space each claiming it was their disinformation output that had been the most influential in gaining the “no” vote.

But the award should go to the covert Civil Service anti-independence team, funded by the Scottish taxpayers but working out of Downing Street under the guidance of the late Sir Jeremy Heywood, Cabinet Secretary and Head of the Civil Service.

790,000 postal voting forms were issued, completed and returned within the notified time period.

But the novel and as yet unproven voting procedure, heavily promoted by the governing authority, was sullied when, just after voting closed, Ruth Davidson, and other influential supporters of the “no” campaign boasted they had known well before 18 September 2014 that postal votes indicated a win for their campaign.

There was a police investigation into the matter but the findings were never notified to the Scottish public who are still waiting for answers, with the result that many Scot’s believe the outcome of the referendum had been fixed ensuring a win for the “no” campaign.

Nov 2014: No Country in History has ever rejected Independence – Until Scotland in 2014

“On 18th September 2014, for the first time in the long history of the world, a country committed national suicide in front of a live global audience. The voters of Scotland, a land with a thousand years provenance, and seven centuries a nation, declined to take responsibility for their own governance, and instead, entrusted it to a cabal of elitists from whom they can expect naught but sneering contempt.”

The biggest study of how Scotland made its historic decision on 18 September 2014 found that the votes of people born outside Scotland were crucial to the result.

72.1 percent of voters from England, Wales or Northern Ireland backed the Union.

There were more than 420,000 Britons from elsewhere in the UK living in Scotland when the last census was taken and if they cast their ballots in line with the findings of the Edinburgh University study, more than 300,000 of them will have voted No.

Voters born outside the UK also rejected independence, with 57.1 percent voting no.

Political scientist Professor Ailsa Henderson, who wrote the study said it showed the influence of “Britishness” among voters born elsewhere in the UK in deciding the result.

But the least sympathetic to Yes were the people born in the UK, but outside Scotland. But, a massive 72.1 percent of voters from England, Wales or Northern Ireland voted No.

There were more than 420,000 Britons from elsewhere in the UK living in Scotland when the last census was taken. And if they cast their ballots in line with the findings of the Edinburgh University study, more than 300,000 of them will have voted No.

56.6 percent of women voted No Voters aged 50-70 or older primarily voted No with the majority increasing by age.

Yes had majorities among people who classed themselves as working class, people at the bottom of the earnings scale and people in rented social housing.

The highest earners, homeowners, and people who described themselves as middle class were more likely to vote No.

Recommendations for the Next Referendum

It is a fact that Westminster will use every trick in the book and many not yet identified to deny Scots an independence referendum free of external influences and the Scottish government will need to be alert to state-sponsored shenanigans. Experience before, during and after the 2014 referendum supports the need for major changes to procedures in any future referendum. To ensure a level playing field the following changes are recommended:

1. Voting is to be restricted to Scottish income taxpayers whose main place of residence is and has been in Scotland continuously from the beginning of January 2015.

2. Voting rights are to be extended to persons aged sixteen on the date of the referendum,

3. Qualified proxy voting is to be permitted.

4. Completed proxy returns are to be retained, unopened, in a secure location in Scotland under the control of the Scottish Police Force.

5. Proxy votes are to be delivered to counting officers between 2000-2200 on the day of voting, to be opened from 2200 hours, verified for correctness and counted.

6. Exit polling at voter venues is to be permitted.

7. State-funded (Westminster or Scottish governments) production or distribution of literature to households, in the course of the campaign is deprecated.

8. The Scottish Government, Scottish Parliament, Scottish public authorities and (by agreement) the UK Government are to strictly observe a 28 day, “pre-vote period” of restriction on publications, (including those which might be published on their behalf, by public media outlets by proxy) relating to the referendum.

8. A media monitoring panel, (authorized to review and instruct amendments to BBC and independent radio and television content before broadcasting) is to be appointed. It is to comprise two “Yes”, two “no” supporters and an independent chair and vice-chair, (recruited from The Republic of Ireland and France). The panel’s decisions are final.