1 May 2018: BBC Bias is Well Capable of Swinging an Election or Referendum

The BBC is an immensely powerful organisation and the way it presents news could potentially have significant effects on election/referendum results.

Across all countries, the UK had the most concentrated media sector, mainly due to the BBC.

Over all mediums, the BBC reaches 81 per cent of people who consume news, and has a 36 per cent attention share.

It has the most power to affect public opinion of any news organisation worldwide.

According to the researchers, it would require just five per cent of the BBC’s audience to be completely trusting of its output to give it the power to swing a close election by one percentage point.

It could swing an election by two points, if 10 per cent of consumers were naive.

This makes it much more powerful than, any major UK newspaper.

To achieve the same result would require in excess of 38 per cent of a major newspaper’s readers to be trusting.

Poll after poll suggests that the BBC is the most trusted news source in Britain, and therefore the combination of its reach and reputation means its output could have substantial impacts on elections and public opinion.

Of course, trust in the BBC has arisen in part, no doubt, because it is perceived to be trustworthy whilst newspapers have editorial viewpoints and priors, and the BBC claims to make big efforts to be impartial.

But with great power comes great responsibility and the issue of bias is critical, as it only requires a small proportion of people to take the presentation of an issue at face value to really affect public opinion.

(Ryan Bourne occupies the R Evan Scharf Chair in the Public Understanding of Economics at the Cato Institute in Washington DC.) 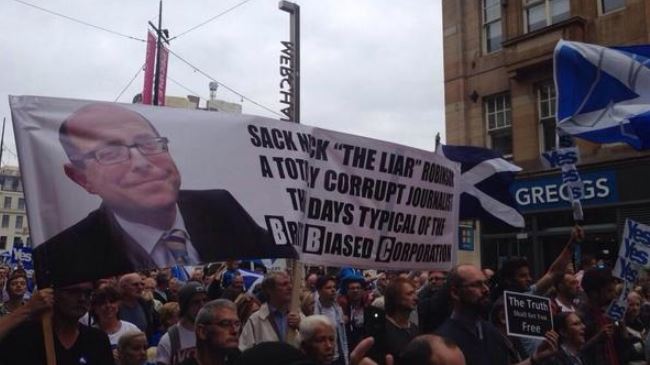 The Westminster government controls and directs the content and bias of the media output of the BBC.

And is accurately reported as requiring the management of the corporation to ensure subjects pertaining to Scottish affairs eg. independence and SNP Scottish governence are presented in a negative format or not reported on at all.

The media content share of the distribution of the annual licence fee finance collected is very unfavourable to Scotland since only about 20% of money collected from Scot’s for the BBC coffers finds it’s way back to Scotland.

Broadcast media policy is retained by the Westminster government which is unfair to Scotland and this needs to change so that a balanced output can be achieved.

As a start media matters applicable to Scotland should be devolved perhaps with international news output being retained by Westminster.

Without change the outcome of any independence referendum in the future will   be prejudiced against “Yes” voters distorting the outcome as it did in 2014.