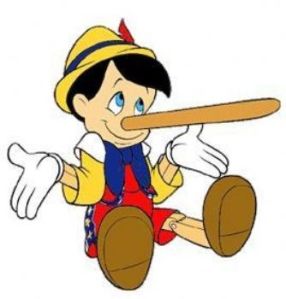 Eleven years after exposure to the public that blatant bias is doctored into news bulletins and documentary reports the BBC News & Current Affairs Division of the corporation still actively embraces the policy despite a barrage of criticism from Scottish viewers / listeners, before, during and after the 2014 Independence referendum.

Balanced reporting and impartial presentation, (a requirement of the BBC charter) was abandoned and the Corporation silently decided upon implementing a programme of unqualified support for the “Better Together” Campaign.

Additional finance (£5m) was allocated, to the Scottish BBC News and Current Affairs team, in Glasgow many months before the referendum so that a restructuring programme could be put in place.

“The presenters, including BBC Scotland’s political editor Brian Taylor, are shown attacking the fairness of the SNP’s proposed referendum question and claiming that Alex Salmond is ‘not impregnable’.

He also said Alex Salmon wished to include a devo-max option on the ballot paper in order to give him a ‘parachute’ should Scots fail to back independence.

In the presentation, Scotland is described as being in financial deficit and requiring subsidy.

Claims are also made that the SNP are ‘changing policy in order not to frighten the horses’.

Brian Taylor is shown claiming that Alex Salmond wants to delay the referendum in order to ‘sow dissent’ amongst Unionist parties, and saying “He [Salmond] wants a contest as close as possible to the next UK general election because he believes that by then his Unionist opponents will be fighting each other rather than fighting independence and Alex Salmond.

He wants to sow dissent among them”.

Taylor also claimed that the Scottish government’s proposed referendum question was not straightforward and simple.

The BBC Scotland man suggested it was designed to elicit a positive response.

On the proposed question: “Do you agree that Scotland should be an independent country?”

The word ‘agree’ according to psephologists is a welcoming word, it draws people in.
People like to agree, they don’t like to disagree so the word there is good.

He added “Why does Alex Salmond favour a second question, devo max, and devo plus, why not just go for independence, which is the one he has the mandate for?

He wants a fall-back, he wants a parachute should independence fail to win”.

It was the day that a host of BBC executives and star presenters admitted what critics have been telling them for years.

The BBC is dominated by trendy, Left-leaning liberals biased against Christianity and in favour of multiculturalism.

At a secret meeting in London, hosted by veteran broadcaster Sue Lawley, BBC executives admitted the corporation is dominated by homosexuals and people from ethnic minorities, deliberately promotes multiculturalism, is anti-American, anti-countryside and more sensitive to the feelings of Muslims than Christians.

A leaked account of an ‘impartiality summit’ called by BBC chairman Michael Grade, is certain to lead to a new row about the BBC and its reporting on key issues, especially concerning Muslims and the war on terror.

A veteran BBC executive said, “There was widespread acknowledgement that we may have gone too far in the direction of political correctness.

Unfortunately, much of it is so deeply embedded in the BBC’s culture, that it is very hard to change it.”

In one of a series of discussions, executives were asked to rule on how they would react if the controversial comedian Sacha Baron Cohen, (known for his offensive characters Ali G and Borat) was a guest on the programme Room 101.

On the show, celebrities are invited to throw their pet hates into a dustbin and it was imagined that Baron Cohen chose some kosher food, the Archbishop of Canterbury, a Bible and the Koran.

Nearly everyone at the summit, including the show’s actual producer and the BBC’s head of drama, Alan Yentob, agreed they could all be thrown into the bin, except the Koran for fear of offending Muslims.

Debating whether the BBC should interview Osama Bin Laden if he approached them, it was decided the Al Qaeda leader would be given a platform to explain his views.

Senior BBC figures queued up to lambaste the corporation for allowing TV newsreader Fiona Bruce, to wear, on air, a necklace with a cross.

The BBC’s ‘diversity tsar’, Mary Fitzpatrick, said Muslim women newsreaders should be able to wear whatever they wanted while on TV, including veils.

Former BBC business editor Jeff Randall said he complained to a ‘very senior news executive’, about the BBC’s pro-multicultural stance but was given the reply: “The BBC is not neutral in multiculturalism: it believes in it and it promotes it.”

Randall also told how he once wore Union Jack cufflinks to work but was rebuked with: ‘You can’t do that, that’s like the National Front!

Quoting a George Orwell observation, Randall said that the BBC was full of intellectuals who: “would rather steal from a poor box than stand to attention during God Save The King”.

Washington correspondent Justin Webb said that the BBC is so biased against America that deputy director general Mark Byford had secretly agreed to help him to “correct”, it in his reports.

Webb added that the BBC treated America with scorn and derision and gave it “no moral weight”.

A lot of heat was generated when the debate addressed whether the BBC was too sensitive about criticising black families for failing to take responsibility for their children.

Head of news, Helen Boaden (1) disclosed that a Radio 4 programme blaming black youths at a young offenders’, institution for bullying white inmates faced the axe until she stepped in.

But Ms Fitzpatrick, who has said that the BBC should not use white reporters in non-white countries, argued it had a duty to ‘contextualise’ why black youngsters behaved in such a way.

(1) Helen Boaden was the BBC director of news who was the subject of heavy criticism for her poor handling of the Jimmy Saville debacle, and offered the job of running radio, with no loss of pay, instead. 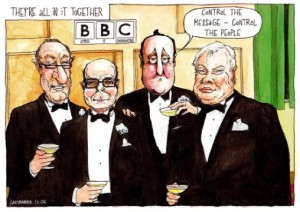 14 Jun 2014; BBC Scotland in breach of its editorial and commercial guidelines for allowing “Better Together” to use its headquarters, crews and other facilities to produce promotional cinema advertising

The BBC has denied there was any breach of its guidelines and said that political parties can use facilities on a commercial basis, but concerns have been raised by former BBC broadcaster Derek Batemen that the BBC is operating in a “grey zone”.

The advert was shown in cinemas last month, but cinema chains including Odeon, Cineworld and Vue later decided to ban all referendum advertising from outlets.

BBC guidelines state: “Any activity involving a third party that could potentially undermine the BBC’s editorial integrity must be referred, in advance to the editorial policy department.

Guidelines also state that the: “value and reputation of the BBC brand may be damaged if any part of the BBC is seen to be associated with inappropriate third parties”.

The revelations will fuel speculation over the state broadcaster’s impartiality in Scotland ahead of the independence referendum.

Nick Robinson BBC reporter was provided with fully comprehensive answers to a number of rambling questions by an always patient Alex Salmond.

Robinson acknowledged answers by nodding his head in agreement at the end. Video length 6 mins 52 seconds. 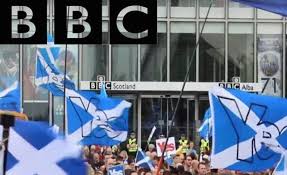 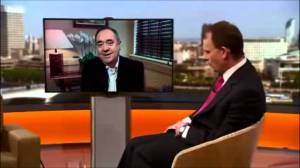 An irate Alex Salmond today declared war on the BBC after the Corporation disclosed Royal Bank of Scotland’s decision to move its headquarters to England if there is a Yes vote.

The First Minster accused Nick Robinson of heckling him and demanded the Corporation cooperate with a leaks inquiry over RBS’s announcement. 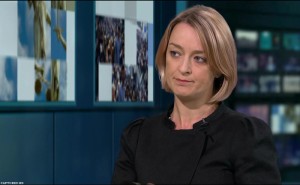 Stuart Cosgrove, has slammed the lack of journalistic scrutiny of Scottish independence referendum ‘scare headlines’ and called for a re-think at the BBC on the nature of balance and due impartiality.

Speaking on BBC Radio Scotland, Cosgrove said misreporting over claims the Royal Bank of Scotland would move jobs to England in the event of a Yes vote had been shown to be lacking substance and scrutiny after RBS issued a clarification to the media confirming any move would be relevant to “operations, not people”.

“I think elsewhere in the media and elsewhere within this organisation, the last 24 hours have allowed people to assume that this is about job losses in Scotland and the loss of great, significant investment.

It’s clearly now is not, and yet another story when investigated the day after is proved to not have anything like the substance [it seemed].

The lack of scrutiny of this and the idea that people just wanted scare headlines I think is an outrage, particularly at this stage in the referendum when there’s so much to talk about and where journalism should be coming alive.

Let’s just take the BP example; we are being told that BP are moving to London.

He added that following the referendum there should be an examination of how the BBC measured balance and impartiality in its coverage, saying that applying election coverage models to the referendum when the main parties are unionist could limit time given to voices from the Yes side.

“One of the things I’d like to challenge, and I think it’s something we’ll need to talk about once the referendum’s over – and I think it has a significant impact on this institution, the BBC – is the nature of balance and due impartiality,” he said.

“Yesterday, I was watching the rolling BBC News very closely and it was clear that notions of balance were being predicated on a party political basis.

The camera panned from Cameron to Miliband to Clegg and back.throughout the programme.

“If you look at it as a different premise – it’s a yes/no question – then Patrick Harvie of the Greens, who is not the leader but is a significant political person within the Yes campaign, should have had exactly the same coverage as Ed Miliband.

Do you think for a second he got that? Of course he didn’t.

I think there’s been a failure of the understanding of the nature of balance and due impartiality. It’s simply wrong and not acceptable.” 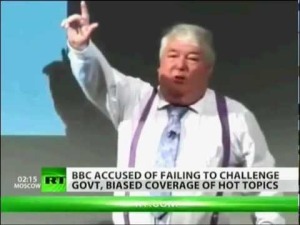 As a crowd demonstrated outside of the headquarters of BBC Scotland on the afternoon of Sunday 13 September, with a banner being used to call for the sacking of the corporation’s political editor, Nick Robinson, the BBC released a statement to deny the accusations that its coverage was biased.

A BBC spokesperson told The Drum: “We believe our coverage of the referendum has been rigorously impartial and in line with our guidelines on fairness and impartiality.”

The Yes campaign reacted following a clash between Scottish First Minister Alex Salmond and Robinson earlier in the week during a press conference where Salmond demanded an inquiry into who leaked the decision by the Royal Bank of Scotland to relocate its headquarters to England in the event of Scottish independence.

Robinson had attempted to push Salmond for a response on the economic significance of such a decision by the bank, which led to Salmond accusing him of ‘heckling’.

Speaking afterwards to BBC Radio Scotland, Salmond said of the leak: “What concerned me is not the impact on jobs because there will be none…what really concerns me is how this information was released to the BBC.”

BBC reporters have also faced further accusations of bias in their reporting directly through social media.