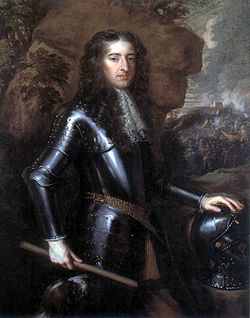 Much has been made in the Unionist press and media of a resurgence in the fortunes of the Tory Party in the local Council elections.

Some political pundits attribute the change to a transfer of allegiance by the Protestant Orange Order away from the Labour Party to the Tory Party which recently changed its name from The Conservative Party back to The Conservative and Unionist Party. A minor change garnering a major result.

If affirmed the Labour Party voter base might deteriorate further in the General Election but  this will probably manifest in Labour voter apathy and it is unlikely any party will benefit in the short term.

The polarisation of Scottish politics is now well established.

The Conservative and Unionist Party has claimed the right to defend the Union.

The influence and role of the Labour Party and the Liberal Democratic Party is reduced that of political spoilers.

In the local council elections the Conservative and Unionist party recruited, marshalled and deployed their activists much more effectively than any other party and reaped the benefits. Lessons are there to be learned.

The SNP stand alone promoting the case for independence and it is imperative that every effort should be made to get supporters of independence to the voting booths on the day of the General Election.

The article that follows provides a detailed history of the Orange Order in Scotland and its capacity for disruption. 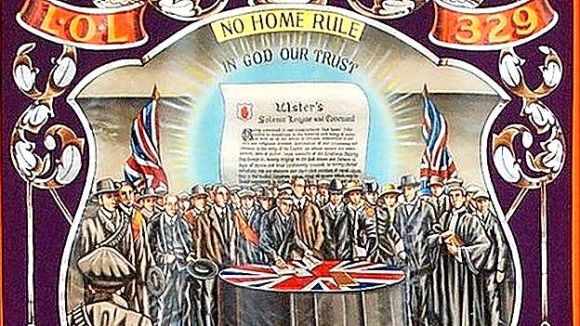 The Orange Order in Scotland

The Orange Order first surfaced in the north of Ireland in 1795.

It’s constitution commits members to the defence of Protestantism and the British Crown.

It provides a focus for Protestant ethnic groups in Scotland and Northern Ireland.

Although it’s promoted activities are focused on social and religious matters the political dimension has always been considered to be of prime importance and the Order has provided a number of political activists and leaders at many levels of Scottish political society.

The Order is not exclusively an Irish import to Scotland since the politics of native Scots in the West of Scotland was historically sectarian in nature but apathetic towards the problems of Ireland.

This ensured the political growth of the Irish-Protestant working class in Scotland would be influenced by native Scots who were more inclined to embrace socialist ideology as opposed to confrontation.

The loss of many thousands of young Scots soldiers and the depression after WW1 changed the mindset of Irish immigrants and their descendants who became more reliant on the Order to ensure their place in Scottish society.

This brought with it a significant increase in membership and a much enhanced Order presence in the politics of Scotland in the 1920-1939 period.

At the end of WW2 and up to the late 1950’s the Order was influential in ensuring the political direction of the Protestant working class vote in the Central belt of Scotland.

The industrial downturn and slum clearance programmes in Scotland, brought about the establishment of overspill areas, such as Easterhouse and Castlemilk.

Expansion of town and village living; Coatbridge, Airdrie, Motherwell, Hamilton and the new town of Cumbernauld.

Similar programmes were completed in Edinburgh and the East of Scotland forming overspill areas such as Muirhouse, Sighthill and the new-towns of Glenrothes and Livingston.

The impact of the changes on the Order was significant. Membership fell sharply as the population of the Central belt of Scotland became more dispersed and the influence of the Order was lessened markedly.

But although much reduced in numbers the Order in Scotland is still influential in Protestant communities.

West Lothian, in the East of Scotland is an Order stronghold and there are a significant number of lodges in Renfrewshire, Wigtownshire and Ayrshire.

Conversely there are few lodges in Edinburgh, Dundee, Aberdeen and the Highlands and Borders regions. 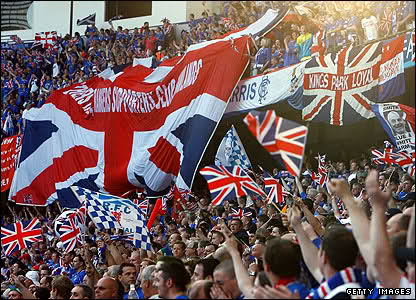 Male membership of the Order

The highest ever male concentration of the Order in Scotland was recorded at 10% in Govan and Rutherglen, but overall Scottish male membership density rarely exceeded two percent. 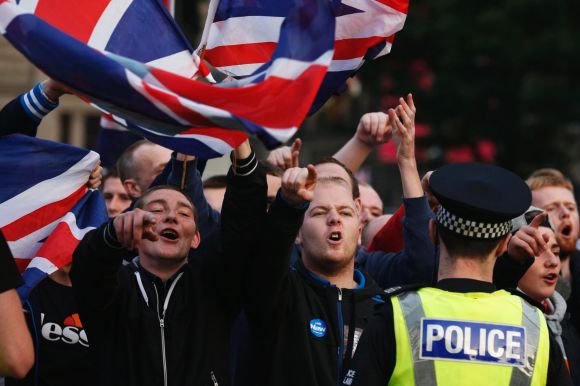 In Glasgow, at Ward level, pockets of the Order are to be found in; Govan (Kingston), Ibrox, Kinning Park, Fairfield, Kingston, Rutherglen, Cowcaddens, Drumchapel, Maryhill, Possil, Cowlairs, Baillieston and Bridgeton. 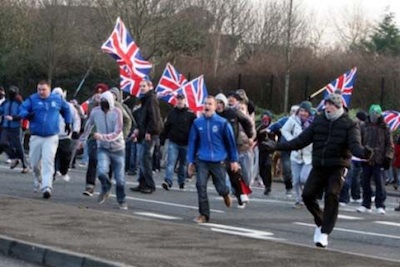 Order membership improved following the introduction of licensed social clubs coupled with an ever increasing appeal of soccer and para-military activity in Northern Ireland.

Spikes and fluctuations in membership are also attributed to a number of factors: 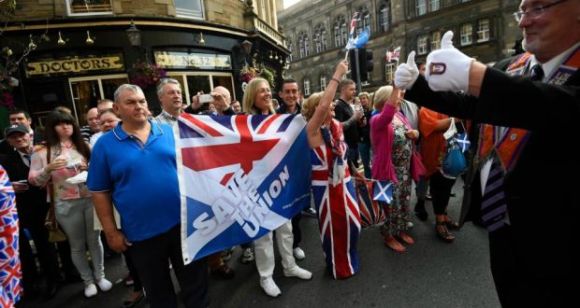 The Northern Ireland Troubles of 1969-90

In the 1960’s and throughout the troubles the policies of the Order in Scotland became ever more militant answering the perceived threat to the Union by Nationalists.

“Scottish” Lodges and their bands travelled to Northern Ireland in increasing numbers in the “Marching” season.

Over time the distinct “Scottishness” of marching lodge members was replaced with “Ulsterness”.

Pipe bands stopped travelling and Scottish Saltires were replaced with the Red hand of Ulster.

The retention of the Union Jack proved to be significant.

Later surveys identified that Order members claimed their identity to be “British” and it was the protection of the “Union” that drove them to go to Ulster each year.

The Grand Lodge of Scotland which supported financial contributions to Ulster, was also heavily involved politically, without success throughout the period with the many differing factions in Ulster and UK governments.

Nevertheless the Order benefited from the troubles achieving the highest ever level of membership in many years. 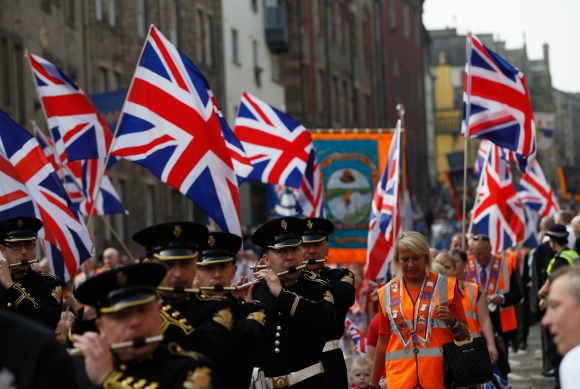 The 1982 visit of the Pope proved to be the turning point for the Order and it’s steady decline in membership and influence.

Hard-line “Ulsterised” rank and file members demanded militant action preventing the visit but were not supported by senior Order officers or the Grand Lodge.

A number of small groups ignored instructions and went ahead with protests causing an amount of disruption.

The failure of the Grand Lodge to establish control encouraged lodges to ignore instructions forbidding it introducing Sunday opening, the sale of alcohol and singing and dancing.

An added impact was the increasing militancy and unruly behaviour of marching bands and their supporters.

Bands had evolved from the Scottish pipe bands of the 1960’s, first to the accordion, then to “blood and guts” flute bands whose average age was under 30y.

Despite suspensions the bands continued to perform at many “Orange Walks” in Scotland and Northern Ireland. 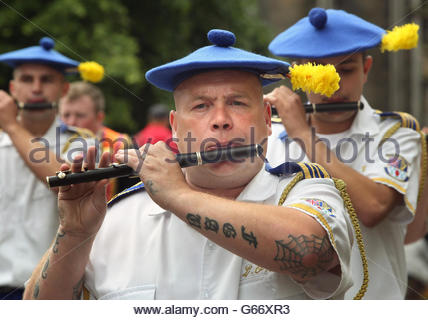 The Order in Scotland can be credited with the establishment of a working class Unionist Tory base through the lodge system and it’s influence over political events in Glasgow up to the start of WW2, was substantial resulting in a number of Tory Orange Order MP’s being elected to Westminster.

The Order had little purchase however in the rest of Scotland since there were no other significant Orange Order clusters.

The Scottish Unionists successful political recruitment and retention strategy up to the early 1960’s was centred on cultivating the votes of the Order membership without compromising it’s aims and ideals.

But the party alienated many members of the Order when it turned away from Unionism retaining only “Conservative” in it’s title.

Many Order members drifted away to the Labour party.

Thatcher’s agreement to support the 1985 Anglo-Irish Agreement proved to be the catalyst that severed any links between the Order and the Tory Party in Scotland.

Disillusioned Order members, supported by the Grand Lodge formed a political block to the Tory Party using their votes tactically making claim to a reduction in the number of Tory MP’s in Scotland.

Political observers are inclined to the view that the withdrawal of their support had less impact on the fortunes of the Tory party in Scotland blaming other Thatcher actions against Scotland. 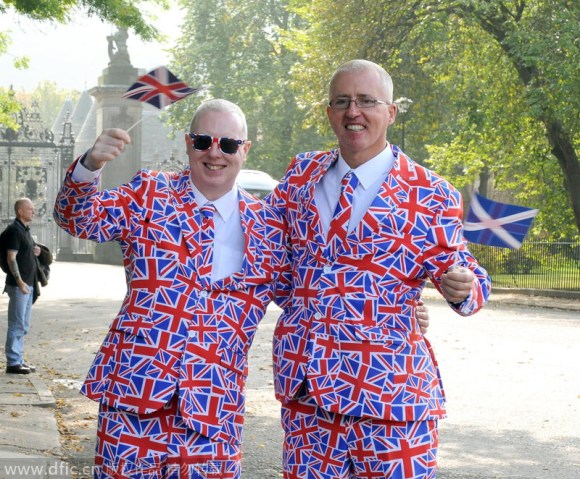 The Scottish Protestant tradition of Masonry stretches back to the middle ages and  the organisation of Freemasons in Scotland is broadly similar to that of the Orange Order.

Indeed there is a school of thought that supports the view that the Order first adopted the rules of Scottish Freemasonry and amended them to suit their own needs.

It is of no surprise that the Orange Order has done so well among Scottish Protestants.

Scotland’s total of around 170,000 Masons is the largest Masonic membership rate worldwide making it a Protestant institution guaranteed it’s place in Scottish society.

The stability of Scottish Freemasonry is attributed to its “articles of association” which require members to be strictly apolitical and non-religious, unlike the Orange order, (with 70% of its Scottish membership clustered in Central Scotland.)

It is also important to draw attention to class differences in the two groups of Protestants in Scotland.

In Glasgow, Masonic Lodge halls are primarily located in the more affluent West of the City and in the satellite villages and small towns on the city’s outskirts.

Major concentrations of Masonic lodges are also to be found in the Borders, Highlands and the North-east.

Other lodges are located, in Aberdeen, Dundee, Edinburgh and Perth.

Conversely Orange Order Lodge Halls are located in working class areas of Glasgow and similar locations in other Towns in the West of Scotland. 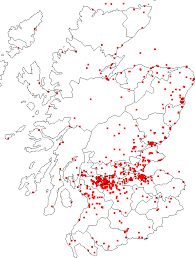 In the last 30 years Scottish Protestant church membership and attendance has fallen significantly and the Grand Lodge is increasingly impotent in the control of younger, often more militant members who challenge it’s right to dictate policy in regards to the support of Ulster Orange-men. 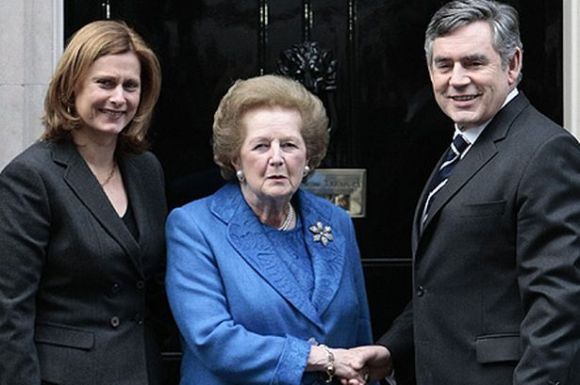