The Scottish Secretary said: “This sort of behaviour has to be called out. We’re not going to face down homophobia unless we call out people who practice it.”

His son Oliver, who was elected to the Scottish Parliament last May, branded the “Wings Over Scotland” comment “absolutely disgusting and unacceptable” and added: “I get a lot of abuse online. There are certain individuals you don’t want to give oxygen to but sometimes comments people make just cross the line.”

Are the Mundell’s thin skinned??  Was their umbrage induced by the need of a photo opportunity??   Is the Unionist media upping the hype aiding the Tory party political agenda??

23 February-2009: Oliver – Son of David and his time at Edinburgh University was not without incident

Edinburgh University Students Association President (Divinity Student) candidate, Oliver Mundell was forced to apologise after reducing a disabled student to a nervous wreck in an attack on less able opponents when he was running for President of the Student’s Union, (he failed). 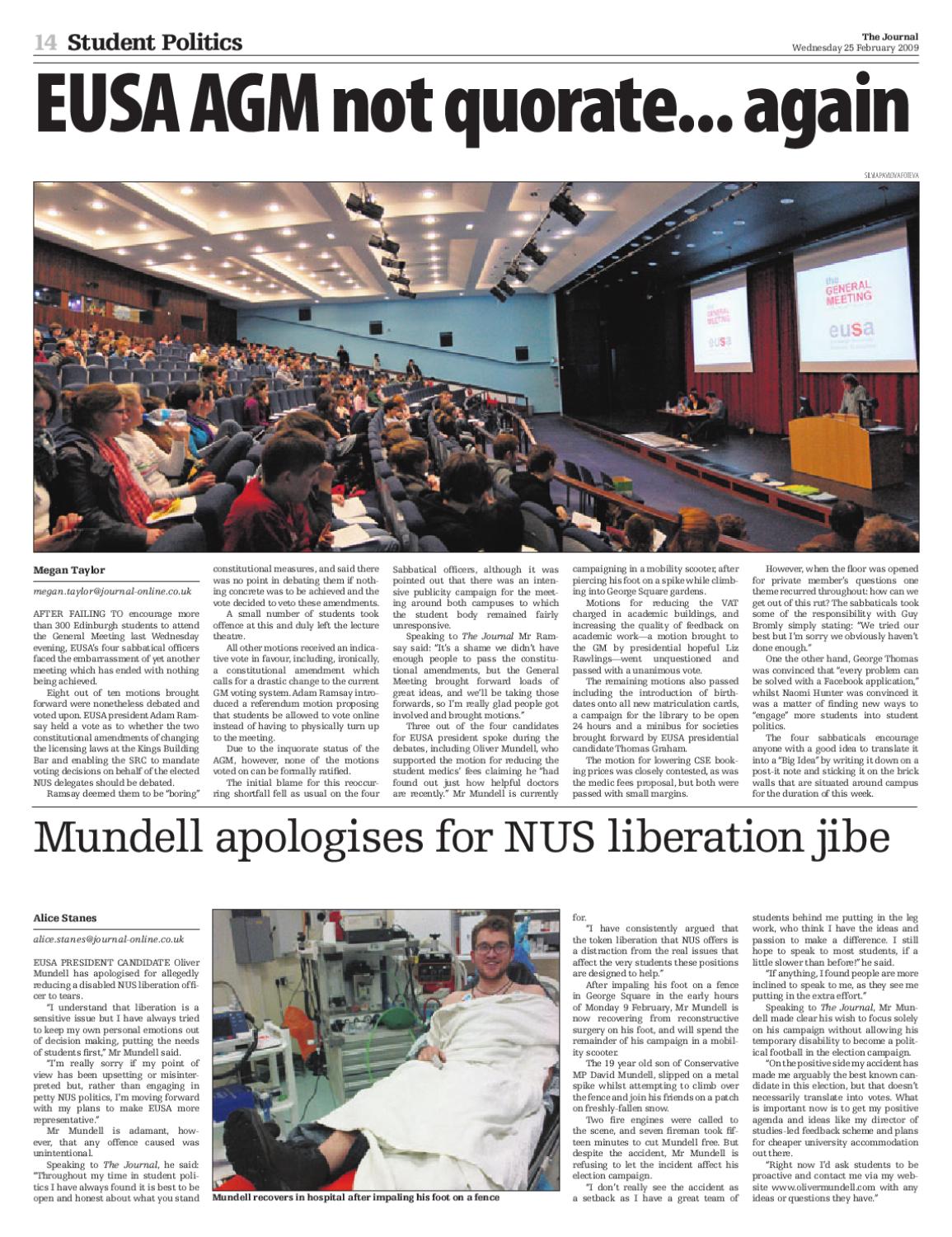 And what about Michael Gove? A supreme Stud mehaps

10 Jan 2009: Young Tory Chairman caused outrage after boasting about dressing up as Madeleine McCann at a party.

Matthew Lewis bragged his costume would include a blonde wig, pink pajamas, teddy bear and vial of fake blood.

But in a series of foul comments, he joked with friends – two of them Tory members – online about his tasteless outfit..

Yesterday, the family of missing Madeleine, five, blasted his actions and said they had caused great hurt.

Spokesman Clarence Mitchell said: “The offensiveness of his comments is almost beyond belief.

It’s a disgrace Madeleine’s name and image should be made fun of in this way.”

Lewis had exchanges with friends on Facebook about how he needed a blonde wig to complete his outfit.

A fellow Tory asked him: “Is this a cunning (Baldrick style) plan to obtain the reward money?”

In one especially offensive exchange, Lewis was asked, “You like small girls, ey?” He replied: “I like to dress up as them, yes.”

On New Year’s Day, after the party, Lewis told another Conservative Future member online: “There was a brief moment I thought I might have gone too far with the costume, but it was OK.”

Unbelievably, one party guest was apparently dressed as Baby P, the boy who died in Haringey, London, after horrific abuse.

Last night, Lewis made a grovelling apology. He said in a statement: “I completely regret my behaviour and cannot express how sorry I am for the incredible hurt I have caused.

While my actions were not meant to be malicious, I understand the pain they brought.”

The fancy dress stunt outraged Deputy Prime Minister Caroline Spelman MP who, as Tory Party chairman at the time, said ‘This offensive behaviour is not only shocking but intolerable and completely unacceptable. There is no place for this sort of person in the Party”.

2 Feb 2012: Young Conservative who sparked outrage after going to a party dressed as blood-stained Madeleine McCann is back working for the Tories

A Young Conservative who provoked outrage when he dressed-up as a blood-stained Madeleine McCann for a fancy dress party is back working for the Tories on European policy.

Matthew Lewis was supposedly expelled from the Party in 2009 by officials who were appalled by a series of entries about ‘my bad taste party outfit’ on his Facebook page.

But a biography next to a photo of a smiling Lewis on the Young Conservative Europe Group website states that he is in his second term as its chairman.

But supporters of the Union  are allowed to publicly state their views well knowing they will not be subject to criticism of Unionists of the Tory, Labour and Libdem Party’s

It is really astounding that David Trimble should have had a man such as this giving him advice – and must surely cast grave doubts on his own political judgement.

I think these sorts of relationships are immoral, offensive and obnoxious.

Ian Paisley Jr, who won the seat of North Antrim and son of the party’s founder, on learning that David Trimble, the former first minister for Ireland, had a gay aide who just married his partner in Canada, in 2005.

I could not care less what people get up to in terms of their sexuality, that’s not a matter for me – when it becomes a matter for me is when people try to redefine marriage

I am pretty repulsed  by gay and lesbianism. I think it is wrong. I think that those people harm themselves and – without caring about it – harm society. That doesn’t mean to say that I hate them – I mean, I hate what they do.

Ian Paisley Jr, who won the seat of North Antrim and son of the party’s founder, speaking to Ireland’s Hot Press magazine in 2005.

It wasn’t Iris Robinson [his wife] who determined that homosexuality was an abomination, it was the Almighty.

I have a very lovely psychiatrist who works with me in my offices and his Christian background is that he tries to help homosexuals trying to turn away from what they are engaged in.

And I have met people who have turned around to become heterosexual.

Iris Robinson, former MP for Strangford, and wife of former First Minister for Northern Ireland, Peter Robinson, reacting to the news that a man had been assaulted because he was gay, in 2008.

There can be no viler act, apart from homosexuality and sodomy, than sexually abusing innocent children.

I cannot think of anything more sickening than a child being abused. It is comparable to the act of homosexuality. I think they are all comparable. I feel totally repulsed by both.

Iris Robinson, former MP for Strangford, and wife of former First Minister for Northern Ireland, Peter Robinson speaking in the House of Commons in 2008.

Peter Robinson, former first minister for Northern Ireland speaking to the Irish News in 2014, where he supported a pastor who said in a sermon “Islam is heathen, Islam is satanic, Islam is a doctrine spawned in hell.”

Envisage, down the road, a child going to primary school and being collected by two females or two males, and the bullying and abuse to which those children will be exposed; or going into their parents’ bedroom, as is natural for a child to do, and finding two women or two men making love?

I stand by my faith and the word of God that man was created in the image of God and that woman was created from the rib of Adam to be his help meet and companion. That is the natural progression of procreation.

The word of God says that procreation is through a man and a woman.

We are moving mountains to facilitate immorality and to bring the rights of lesbians above all others in this country.

It is a shame, and honourable Members ought to hang their heads in shame.

Iris Robinson,former MP for Strangford,  speaking in the House of Commons in 2008.

The facts show that certainly you don’t bring a child up in a homosexual relationship … that a child is far more likely to be abused or neglected … in a non-stable marriage.

Jim Wells, former deputy speaker of the Northern Irish Assembly, speaking at a hustings in 2015.

The group’s leader  Arlene Foster, speaking to the Guardian in 2016.